Leading the way for a more nuanced application, by Claudia Rowe '88 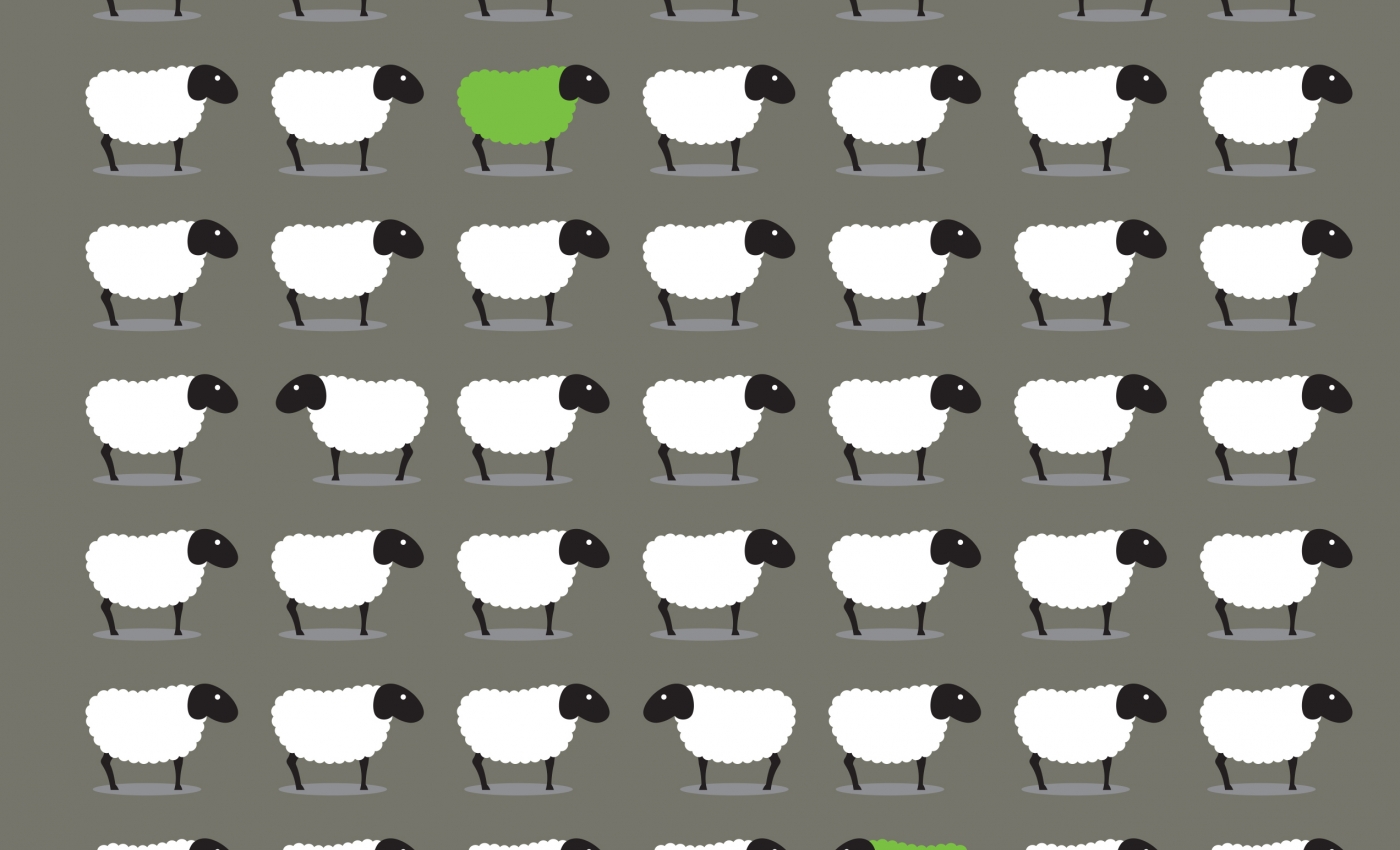 Pity the college admissions officer, reader of thousands of high school transcripts. Gatekeeper to all those futures.

Much has been written about today’s higher-education rat race, the primacy of competition over learning, the students who upload their scores and credentials to the Common Application site and apply to dozens of colleges with the click of a mouse. Bennington College President Mariko Silver likens it to hamsters running on a wheel.

In his surprise hit Excellent Sheep, about this intellectually bankrupt process, Ivy League refugee William Deresiewicz describes bleary-eyed admissions officers keeping their energy up through marathon screening sessions by gorging on junk food as they plow through applications, evaluating each student’s “PQs” (personal qualities) with a thumbs up for “good rig” (solid academic rigor) and a thumbs down for those who appear too “pointy” as opposed to well-rounded.

So warped has the system become that renowned Harvard professor and literary critic Helen Vendler suggested, with some alarm, that alumni T.S. Eliot—who was nearly kicked out for lousy grades—likely would never win admittance there today.

“The whole system is relatively broken,” says Terry Kung, Director of College Counseling at Brooklyn Friends School, in New York, who guides dozens of students through this gauntlet each year.

The Common App has its upside: in particular, the efficiency. Students create a single application and submit it widely. But you could also call it the machine-gun approach to choosing a college—fast, scattershot, inexact.

Alumni able to recall their college-application experiences from the early 1990s, and before, will shake their heads in confusion.

By the mid-’90s, most applicants were using the Common Application, even though potential Bennington students would also have to include supplemental essays and materials.

“Over the last 10 to 15 years, the whole nature of applying to colleges has gone through a flattening,” said Hung Bui, Bennington’s vice president and dean of admissions and financial aid.

That is until 2013, when over the course of a year the College conceived and created its Dimensional Application, joining Bard and Goucher in providing students a distinct alternative: the opportunity to curate their submissions and engage in the admissions process as a learning experience. Much like Bard is, Bennington’s team was interested in designing an application that would better reflect the rigors of being a student at the school.

“I’ve seen it when kids light up and go ‘Whoa, that is intense. That is awesome. I’m so excited,’” said Kung of the three schools’ new, non-traditional approach. “As an institution, that is the kid you want, because they get it.”

Bennington, like Bard and Goucher, still accepts Common Applications. But the alternative route is quickly gaining steam. In its first three months of existence, the Dimensional Application had attracted nearly a third of early-decision students—that is, applicants more interested in Bennington than any other school.

“It puts our philosophy at the forefront in ways that get students excited,” said President Silver. “True Bennington students really want to get into the work.”

As sensible as the new approach is for finding the type of directed, thoughtful kid traditionally attracted to Bennington, there are other, more political reasons behind the pushback.

At Goucher College in Baltimore, Maryland, where President José Antonio Bowen calls the standard admissions process “insane,” faculty have long been concerned that the Common App may squash exactly the kinds of students who flourish there. These are kids who perhaps stumbled through their early years in high school before becoming late-blooming leaders.

An average GPA, as presented on their high school transcripts, won’t show that sharp upturn. Additionally, first-generation-to-college students are frequently intimidated by the online form. But Goucher’s new application requires nothing other than a two-minute video—something that 18 year old can make with their phone—and two graded assignments from a high school teacher.

Nothing in recent memory has been so immediately galvanizing, said Carlton “Corky” Surbeck, director of admissions at the Maryland school. As of mid-November, there were 52 video applications in process, and seven had been submitted.

“As a person who’s read tens of thousands of college application essays, I found each of these video presentations to be more persuasive, more articulate, colorful and convincing than the majority of the essays I’ve read,” Surbeck said. “The faculty here—who are known for being tentative, at times—have jumped on this as an opportunity to find the type of students that really want to learn.”

At Bard College, which introduced its four-essay Entrance Exam last year (get an average grade of B+ and you’re in—no tests, transcripts, or interviews required), President Leon Botstein sees it as nothing less than an effort to reclaim American education.

“Teachers, scientists, and scholars must once again take charge,” he said when unveiling the Entrance Exam. “The entire apparatus of high school and college entrance examinations [is] bankrupt.”

Skeptics suggest that these transcript-free alternatives are merely gimmicks, ways for applicant-hungry schools to lower the barrier to entrance. But Bard’s overall application numbers have been moving steadily upward for years, and one glance at the college’s essay questions will quiet even the snarkiest critic. Students have four months to pen 2,500-word responses to four of 21 intensely challenging inquiries designed to illuminate the quality of their critical thinking in three areas: social science, history, and philosophy; arts and literature; and science and mathematics.

So warped has the system become that renowned Harvard professor and literary critic Helen Vendler suggested alumnus T.S. Eliot—who was nearly kicked out for lousy grades—likely would never win admittance there today

Hardly the usual “tell us about yourself” pablum.

Two years ago, when Botstein floated his idea to a group of high school guidance counselors in Los Angeles, he chuckled that the college admissions staff were laying bets on how few students would rise to the challenge —maybe five, they guessed. But Botstein considered the Entrance Exam an experiment. He wanted to see what would happen.

Forty students took part in the first go-round, 17 were admitted and 11 are now attending. As of November 2014, the numbers were up almost 50 percent to 58, with more streaming in.

“A lot of students have told us how much fun it was,” said Mary Backlund, Bard’s director of admissions. “Sometimes we forget that admissions exists—and, actually, colleges exist—for the students. I know that may sound like a crazy idea.”

Questions remain for all three schools. No one knows how removing transcript requirements might affect the quality of the overall student body, nor how many of those kids who enter test-free will persist to graduation. Still, Bennington, Bard, and Goucher are not flying entirely blind. All three have made the SAT/ACT tests optional for years.

And while overhauling college admissions could be hugely beneficial to each institution, refining the process may be an even bigger boon to students. In addition to giving prospective Bennington students a taste of the college’s approach to education, Dimensional applicants get feedback on their submissions in music, or literature, or science, from alumni in those fields—including the president of the Los Angeles Philharmonic, a National Book Award-winning novelist, and a distinguished stem cell researcher at Harvard.

“For a young individual to get that kind of response to their work, we all know how powerful that can be,” said Amar Sahay, who graduated Bennington in 1997 and now runs the Sahay research lab at Massachusetts General Hospital. “For every individual who’s put in the time to generate this application, I’m happy to give this—whether or not they ultimately choose to attend—in much the same way that other people imparted their training to me.”

Sahay himself applied to Bennington via the Common Application during the mid-1990s. He also took ceramics during his first year in Vermont, before moving on to collect accolades for psychiatric research from the National Institute of Sciences, Johns Hopkins, and Rockefeller University.

Students of similar openness, curiosity, and drive will find the Dimensional Application natural, he predicts.

“It’s a way of selecting students who have already demonstrated a willingness to think about a problem in a deep way, and I think that’s very important,” Sahay said. “In science, just because you have an idea, it doesn’t mean anything. It’s the willingness to take risks, to think big and execute that idea with critical thinking that really has an impact.”

Taking risks, thinking big. Both are cornerstone qualities for a Bennington student and central to the ideal of a college education: the chance to have, as Deresiewicz puts it, “an adventure with yourself.”

Back in her office at Brooklyn Friends, Kung said these experiments might well signal a much broader movement.

I’ve seen it when kids light up and go ‘Whoa, that is intense.'

“At other colleges, they’ll tell you privately that they don’t think the SAT is such a great test, that they wish they could hear more students’ stories and be more creative about this process. I appreciate Bennington thinking outside the box—because they can,” she said. “My prediction is that they’ll find better matches. They’ll definitely get more interesting students.”

Claudia Rowe ’88  is an award-winning social issues journalist. She currently covers education at The Seattle Times.