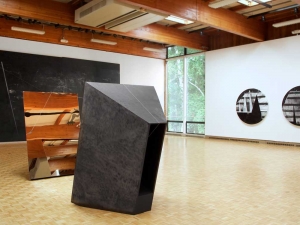 Scalar | September-December 2018
Scalar featured paintings, drawings, and sculptures by artist Torkwase Dyson, known for her use of abstraction and modes of inquiry from art, architecture, and geography to explore the production of form within contemporary economic and political climates. Dyson took inspiration from the geometric and mathematic formations of the late artist and architectural designer Tony Smith, whose tenure as an instructor at the College was significant in his development as a sculptor. View the exhibition. 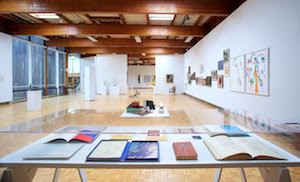 Unpacking the Vault | February 27-April 15, 2018
Unpacking the Vault is a student-researched exploration that reveals and honors the eclectic nature of the Bennington College art collection. More than 70 paintings, sculptures, prints, books and other objects are included, by makers ranging from renowned abstract painters such as Agnes Martin to celebrated Bennington alums such as actress Holland Taylor. View the exhibition. 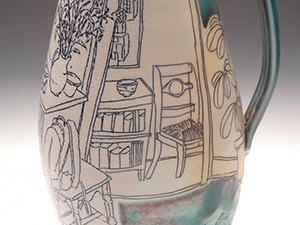 Vessels | April 24-May 12, 2018
Vessels is a sweeping exhibition of hollow-form ceramics. Curators Barry Bartlett and Aysha Peltz invite the viewer to consider the the history of the vessel, from its primal beginnings as a container necessary for survival through its evolution into an increasingly sophisticated form of expression. View the exhibition. 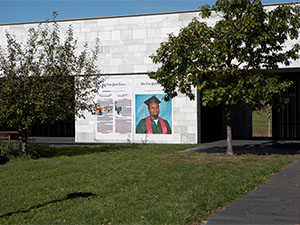 In Fall 2017, Bennington College presented an exhibition and lecture by critically acclaimed media artist Alexandra Bell. This event was the first display of Bell’s work by an academic institution, and the first to present her radical re-edits as a series. View the exhibition. 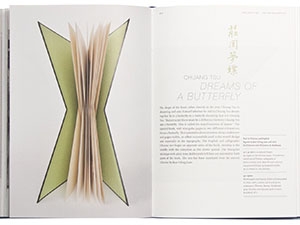 Usdan Gallery hosted an exhibition of Gunnar Kaldewey’s books and prints. Gunnar’s summer home, studio, and presses are located just 45 minutes from campus, and this proximity inspired the idea to have him share his work with the Bennington community. 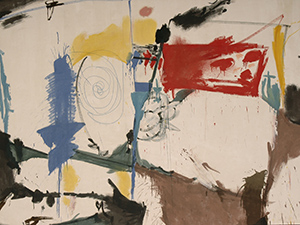 Vital Curiosity explored the use of color and abstraction by artists associated with the College from the 1940s to the 1990s. The exhibition included work by Helen Frankenthaler ’49 and Grace Wapner ’55, among others. 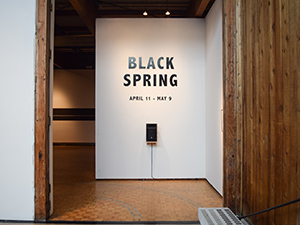 BLACK SPRING was an exhibition organized by current students representing black lives at Bennington, past, present, and future, through audio, video, performance, sculpture, photography and text. Each week new works were added to this exhibition, which layered media, experiences of history, and identity. 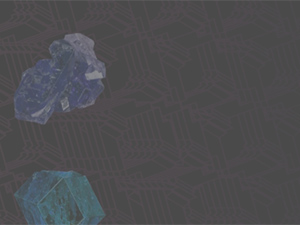 Michael Dyber is a world renowned Gem Cutter. His work is featured in many top international museums and collections. A collection of mineral specimens from Belvidere Mountain in Eden/Lowell, Vermont was on display, along with a special watercolor painting by world famous mineral painter Fred Wilda. 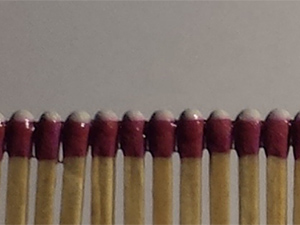 VBS (violet burning sunset) consisted of two shows in one room, one entirely of artworks that eschew color and embrace solid materiality, in mostly muted and gray tones, the other of artworks that employed color and illusionistic space to an intense effect. 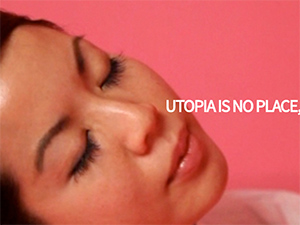 Inspired by Bennington’s experimental curricula and its history as a women’s college, this show transformed Usdan Gallery into a space for critical feminist pedagogy. Resources such as a crowd-sourced library, printing press, and discussion groups were made available for autonomous and collective investigation.

In collaboration with the Museum of Contemporary Art Beijing, Bennington College hosted the China Dialogues (November 2-December 2), an exploratory project in providing a supportive platform for artists to showcase creativity while promoting cross-cultural conversations. It featured open rehearsals within an installation created by professor Yangen in collaboration with Dai Jian.

Penelope Umbrico’s Campus Surplus explored the connections between the Modern school and office: the rationalized spaces, tools, and systems that promise efficiency and productivity. The exhibition included photographs of used copiers, desks, cubicles, and plants collected from liquidation websites, as well as images she had taken in the surplus rooms of college campuses around the country, video projections of a custom-made tile game, materials related to learning products, and a site specific installation drawn from Bennington’s own Buildings and Grounds.

Artist Dan Shapiro taught printmaking at Bennington College beginning in 1947. This show was held in coordination with two other exhibitions of Shapiro’s work in Bennington, VT: Living the Print, 1949–1969, held at the Bennington Museum, and The Late Years, Works on Paper from the 70s and 80s, held at Left Bank Gallery.

This exhibition followed Price’s Meat series, inspired by a violent incident in Nicaragua in 1985 when Price was shot with a high-powered rifle in his left abdomen. This traumatic experience symbolically killed the trauma of Price’s childhood. The ghosts of his traumatic childhood, the death of his mother and sister in the late 90s, and the remnants of his gunshot wound are recurring examinations in Luther’s body and his body of work. This exhibition featured a brand-new series of handmade 35mm slides, the second ever exhibition of Price’s little-seen sculpture work from the mid-to-late 1980s, and a series of 40 photographs from the late 80s by photographer Russell Scholl.  A mini-retrospective of Luther Price’s moving-image works accompanied the Usdan Exhibition.

An exhibition featuring art work from Chris Sullivan’s feature films, the critically lauded Consuming Spirits and his work in progress “The Orbit of Minor Satellites,” Animated Worlds of Chris Sullivan featured photographs, physical art work, videos of the work being created, dialogue recording sessions, and work-in-progress footage. In 2012, the New York Times wrote of Consuming Spirits: “it is a work of obsessive artisanal discipline and unfettered artistic vision. You have never seen anything like it.”  The Slant review called Consuming Spirits, “not only a monstrous visual achievement, but one of the most uniquely humanistic animated features of all time.”

A collaborative presentation assembled by artist Gregory Thielker and anthropologist Noah Coburn, (Un)governed Spaces focused on the Afghan region surrounding the U.S. military base at Bagram. The region—which has been occupied by Alexander the Great, the Soviet Union, the Taliban, and, most recently, the United States—offers a crossroads of past and present. Over the past three years, Thielker and Coburn lived, researched, and toured the region, sharing intimate conversations with locals, interviewing U.S. soldiers, sketching the bazaar and local houses, and conducting historical and ethnographic research both in Afghanistan and the United States.

Slipped Gears was a multimedia exhibition featuring the work of nine artists. It opened in Usdan Gallery on Tuesday, September 16. The show offered challenging responses to a moment of tectonic cultural transition, as technology increasingly resides in and around us. The artists, many of whom have shown internationally, included Nick Hornby, Joon Oluchi Lee, Kristin Lucas, Rosa Menkman, Jaakko Pallasvuo, Katie Torn, Matias Viegener, and the collaborative duo of Birch Cooper and Brenna Murphy called MSHR. It was curated by Roddy Schrock, director of residencies and programs at Eyebeam, a leading art and technology center in Brooklyn, New York.

This exhibition featured iconic abstract works from the College’s collection, including works by David Smith, Helen Frankenthaler ‘49, Larry Poons, Hans Hofmann, and other influential figures. It included a sculpture by Sir Anthony Caro, on view for the first time ever, which was created using David Smith’s metal after his death.

Here are photographs made without a camera, an approach that dates to the early 19th century when Fox-Talbot used the term "photogenic drawing" to describe his documents of objects from nature. Camera-less photography since Fox-Talbot has moved away from the document; this work, on the other hand, is documentary.