Miguel Gutierrez is a Brooklyn based artist and educator working with dance, performance, text and sound. He performs and teaches all over the world.

Gutierrez is a Brooklyn based artist working with dance, performance, music and writing. He has been called “one of our most provocative and necessary artistic voices” by Eva Yaa Asantewaa at Dance Magazine. His work centers on philosophical questions about desire, identity and the search for meaning. He joins a legacy of artists focused on process and experimental forms, and draws on influences such as endurance-based performance art, noise music, ecstatic experience in social and religious rituals, the study of mind-body somatic systems, and histories of spectacle such as Broadway and queer club performance.

Currently he is working on a new piece called This Bridge Called My Ass, a dance performance that bends tropes of Latinidad to identify new relationships to identity and form. Other recent work includes Cela nous concerne tous (This concerns all of us), a commission for Ballet de Lorraine inspired by the May '68 French protests. With Ishmael Houston-Jones he co-directed Variations on Themes from Lost and Found: Scenes from a Life and other works by John Bernd, which received a 2017 Bessie for Outstanding Revival. His work has been presented at the 2014 Whitney Biennial, BAM, NYLA, The Kitchen, Danspace Project, American Realness, Live Arts Bard, Walker Art Center, Flynn Center, PICA/TBA Festival, CounterPulse, Fringe Arts, Centre National de Danse and Centre Pompidou in Paris, ImPulsTanz in Vienna, Performatica in Cholula, Mexico, Festival Universitario in Colombia and many others.

Gutierrez has received fellowships from the Guggenheim Foundation, United States Artists, Foundation for Contemporary Art, New York Foundation for the Arts, and Tides Foundation. He is a 2016 Doris Duke Artist and a recipient of the 2016 Franky Award from Prelude Festival. Also, he has received four New York Dance and Performance Bessie Awards. His work has been supported by NDP, NPN, MAP, Jerome Foundation, Creative Capital, and the NEA.

Gutierrez has been an artist in residence at MANCC, LMCC, Centre Choréographique National de Montpellier, Centre National du Danse Pantin, Baryshnikov Art Center, and Gibney Dance. He has created music for several of his works and with Colin Self for Jen Rosenblit and Simone Aughterlony. Gutierrez's current music project is SADONNA: sad versions of upbeat Madonna songs. His book WHEN YOU RISE UP is available from 53rd State Press. Currently, he is at work with his sister on a new TV show called Boca. He invented DEEP AEROBICS, and he is a Feldenkrais Method® practitioner. He teaches regularly all over the world and he is the Program Director of LANDING, an educational initiative at Gibney Dance. Gutierrez was a visiting faculty member at Bennington for Spring 2019. 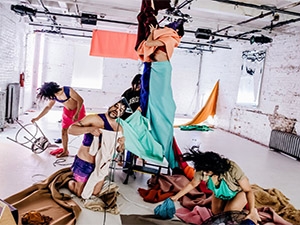