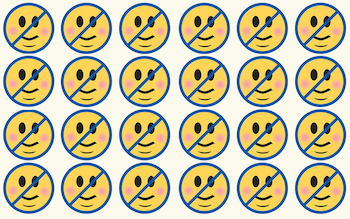 Facebook offers more than 100 feelings that any user can list alongside their posts, ranging from “feeling blessed” to “pissed off.” As of 2015, “feeling fat” is not among them, after Ohio-based playwright and recent graduate Catherine Weingarten ’13 partnered with the organization Endangered Bodies to create a change.org petition requesting Facebook remove the emoticon.

Weingarten first got the idea when she saw a friend using the chubby-cheeked smiley face emoticon in her status. “I think it was supposed to be funny, but seeing this status made me feel angry.” Ninety-seven percent of women admit to having at least one instance of hating their bodies, and this emoticon was alarming because it reinforced those self-destructive feelings. Weingarten was so alarmed by the body-shaming “I feel fat” and “I feel ugly” emoticons that she contacted Facebook the very same day and put it on the radar of her Endangered Bodies network of activists.

Weingarten is not a stranger to this issue. She has struggled with eating disorders and unrealistic body expectations herself. In the United States alone, 20 million women and 10 million men suffer from a clinically significant eating disorder at some time in their life. The National Eating Disorder Association reports that 81 percent of 10-year-old girls are afraid of being fat and 35–57 percent of adolescent girls engage in crash dieting, self-induced vomiting, fasting, diet pills, or laxatives. For most young women (and, increasingly, men), trying to live up to unrealistic ideals associated with beauty severely affects self-esteem.

“I used to have this idea of ‘I’m fat’ and ‘I feel fat,’ but what I meant was that I didn’t feel thin enough and like I wasn’t good enough,” Weingarten explains. “Everyone has fat, regardless of their weight.”

This uproar came shortly after Facebook managed a different kind of media storm, when it was released that the company had experimented with news feeds to evaluate the impact content had on a person’s mood and disposition. The backlash focused on the involuntary experimentation, but the findings of the actual study demonstrated that Facebook content, even when seemingly innocuous, greatly impacts human emotions. Weingarten, along with 16,770 people who signed the petition to get Facebook to remove the “feeling fat” emoticon, were aware of the impact content and news feeds have on self-image and believed that the “feeling fat” emoticon would overwhelmingly be associated with something negative, and used as a way to put themselves down.

Before Facebook removed the chubby-smiley face they told People magazine in an official statement that “People use Facebook to share their feelings with friends and support each other [...]. One option we give people to express themselves is to add a feeling to their posts. You can choose from over 100 feelings we offer based on people’s input or create your own.”

Not good enough for the 16,770 users who signed Weingarten’s petition, which ultimately got the reputedly rigid social media giant to change their ways. A week after the petition was launched in March, Facebook pulled the emoji from the list of status updates.

“As someone who struggled with body image, I am happy that I’ve helped eliminate one form of body-
shaming hatred on the internet,” Weingarten said. “I’m proud to have partnered with Endangered Bodies to lead this effort.”

Bruna Lobato ’15 studied comparative literature and creative writing. Her writing has appeared in The Christian Science Monitor, The Feminist Wire, and Creative Nonfiction. She is currently an MFA candidate at New York University.