The Stranger Visions of Heather Dewey-Hagborg ’03, by Lise Johnson Miller '01. 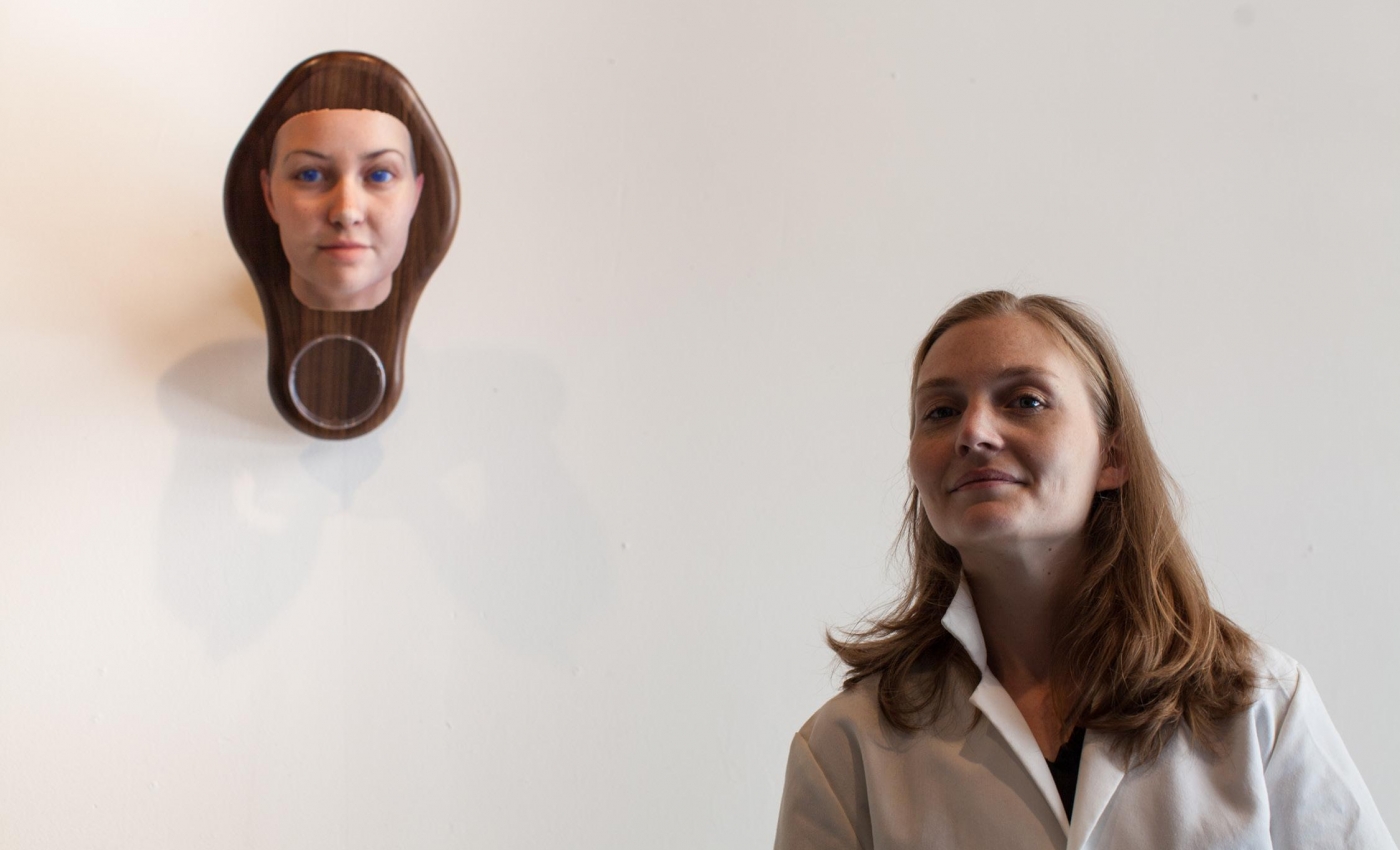 The Stranger Visions of Heather Dewey-Hagborg '03

We do a lot to secure our identity—send bills and receipts through shredders, generate multiple and elaborate passwords, delete browser histories, wipeout hard drives and lock computers and phones. But in the course of our everyday lives we unconsciously surrender the secrets of our DNA. And that is where the work of information artist Heather Dewey-Hagborg ’03 comes in. Collecting what she dubs “genetic artifacts”—cigarette butts, chewing gum, coffee cups, shed skin cells, and hair left behind in public spaces—Dewey-Hagborg builds portraits of strangers through the sequencing and analysis of a person’s DNA to hypothesize about its owner. Her series of portrait hypotheses, Stranger Visions, features masks she has created based only on the genetic material found in the hairs and saliva residue on gum she gathered in diverse New York City neighborhoods. Because our current association of specific genes with specific traits is too rudimentary to provide anything but a familial resemblance, the portraits are gestural rather than literal. Although, as Dewey-Hagborg points out, scientists learn more every day about how genes are expressed by the body, and in 10 to 20 years the likeness yielded by a single hair will be far more accurate. For now, the portraits are meant as a provocation on the subject of privacy.

The questions that Dewey-Hagborg’s work provokes have ignited serious attention by more than just The New Yorker, TED(Heather Dewey-Hagborg returned to campus in late November to deliver a talk about her work, which is documented in brief in this TED video, CNN, and American Public Radio—the surveillance industry is tuning in to her art exhibition, Stranger Visions—and the thought of use by this industry is precisely what makes viewers uneasy. “DNA is as important as we let it be, culturally,” she says. “If we think our DNA defines us, it becomes incredibly important. If we diffuse the importance of DNA, it’s much less sensitive. It’s what makes the work timely. I’d like to think I’ve provoked public discussion, inspired people to think about a fascinating and complicated subject.” She maintains that she is not making a statement, nor is she attempting, for example, to feed paranoia or to help put people at ease. “I enjoy the science and new technologies, and yet I’m critical of how they can be used. The art reflects my ambivalence.”

Currently earning her PhD in Electronic Arts at Rensselaer Polytechnic Institute, where she focuses on bio art, algorithms, and new forms of surveillance, Dewey-Hagborg’s use of surveillance technology to create artwork is longstanding. In 2008, she experimented with eavesdropping systems. She also worked with facial recognition algorithms in an installation that imagined what facial recognition systems might dream about. This was a riff on interests, she says, that predate college. “I came to Bennington interested in exploring the work of John Cage, who composed music by chance methodology. That led me to study studio sound recording and electronic music with [former faculty members] Joel Chadabe, Tom Farrell, and Randall Neal. And then after studying with [former faculty member] Ruben Puentedura and faculty member Paul Voice, my focus pushed on computer science. I was bent on learning how we learn language and how that could be modeled on a computer,” she explains.

I enjoy the science and new technologies, and yet I’m critical of how it can be used. The art reflects my ambivalence

This natural draw to the subject of artificial intelligence led Dewey-Hagborg to befriend fellow student Virgil Polit ’05, who had already been working within the art and tech areas for several years before coming to Bennington. “I think in the first week of school he built a robot and put it out on the lawn,” she laughs, remembering. Polit helped her with the technology and inspired her ideologically and artistically. (Dewey-Hagborg has since spent time in the San Francisco Bay area working in robotics.) The book Information Arts by Stephen Wilson further broadened her vision by portraying science and math as integral to—rather than separate from—art and culture. Her time at Bennington solidified her personal synthesis of disciplines. “What I’ve carried with me since then and think back on very fondly is the encouragement to work against boundaries and not concern myself with disciplines. I believe that I can learn anything, and my art is this process of learning, it always begins with questions.”

The question that her forensic portraiture attempts to answer arose during a therapy session, when Dewey-Hagborg became riveted on a crack in the glass of a painting, and then on something under the glass: a captive human hair. As she described in her TED interview, “I couldn’t stop thinking about that hair. Whose hair it could be, what they might look like, what they might do. I kept thinking about all these forensic shows we watch on TV and the fascination we have with the science of trying to figure out from evidence who was there.” Her walk home seemed as rife with forensic evidence as any crime scene. How available have we unwittingly made our identities to whoever wants to find us, track us, know us? How vulnerable are we?

In order to explore these questions she has had to dig deep into biology and genetics—areas she had no formal academic training in, which didn’t stop her. Working at GenSpace in Brooklyn—a community biotechnological laboratory where anyone can apply for membership to use equipment necessary to extract DNA—Dewey-Hagborg spends several weeks gleaning the genetic profile of a single hair. A great deal of her artistry goes into writing the computer program that translates the genetic markers into characteristics of a face, which a 3D printer then outputs in sand and glue: a realistic mask that differs from others by its skin tone, eye color, distance between eyes, distance between nostrils, and several other traits we are just beginning to associate with certain base pairs.

What I’ve carried with me since then and think back on very fondly is the encouragement to work against boundaries and not concern myself with disciplines.

Dewey-Hagborg’s self-portrait is no driver’s license photo (and thank goodness for that), but it shares her fair skin and blue eyes, freckles, typical weight, and Northern European ancestry. Another volunteer DNA donor, Kurt Andersen, host of public radio’s Studio 360 was pleased with the portrait Dewey-Hagborg’s process yielded from a swab of his inner cheek. Not because the fresh-faced mask was an accurate resemblance, but because it imagined to this father of two daughters a new possibility. “It’s the Matt Damon version of me,” he explained. “I’m thinking, wow, this could be my son—my cloned son.”

Indeed, the public response to Stranger Visions has been enthusiastic. As Dewey-Hagborg told Smartplanet.com, “The predominant reactions I get from people are fascination and curiosity and interest. Most of the e-mails I get are from people who want to send me samples and have their own portrait done.” Given that the process takes several weeks and the cost (not including her time) can reach $1,000, the artist is holding off on fulfilling these requests, although she is considering them. She has discovered something artists historically discover: human vanity makes painting portraits profitable. And who can blame us for wanting to be seen?