Chris Barron ’90 is the lead singer of the iconic 1990s band the Spin Doctors. Reaching the height of their popularity in the early ’90s, the band’s accolades include a Grammy nomination, a Rolling Stone cover, two multi-platinum albums, and two Top Ten hits—“Little Miss Can’t Be Wrong” and “Two Princes”—for which they won a BMI award.

Following the release of Pocket Full of Kryptonite in 1991, the band was embraced by MTV, mainstream radio, and Apple Computers, who sponsored their biggest headlining tour.

After the Spin Doctors went on hiatus in 1999, Barron set off on what he calls “a journeyman songwriting experience,” composing tunes with Blues Traveler’s John Popper (a close high school friend from Barron’s teenage days in Princeton, New Jersey) and with former BMI executive Jeff Cohen. He also returned to his early roots as a solo singer/guitarist, performing acoustic sets in some of the downtown Manhattan clubs where the Spin Doctors got their start. He released a solo album, Shag, in 2001, and launched a new band, the Give Daddy Five. Barron has traveled extensively around the world, performing solo shows and pursuing a variety of musical collaborations. In 2009, he released another solo effort, Pancho and the Kid. The following year, he released Songs from the Summer of Sangria, with his new combo, the Time Bandits.

Barron has been particularly active in Norway, where he has participated in songwriting camps with some of Europe’s leading songwriters, and started a casual supergroup, the Canoes, with three noted Norwegian musicians. 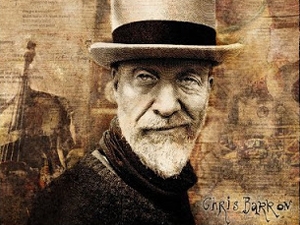