Ellen McCulloch-Lovell served as president—the first female president—of Marlboro College from 2003 to 2014. She started her career as program director, then executive director, of the Vermont Arts Council, the state cultural agency, from 1970 to 1983. She served as U.S. Senator Patrick Leahy’s chief of staff in Washington, DC, from 1983 to 1994, during which time she supervised the DC and Vermont offices and performed as his political designee.

In 1994, McCulloch-Lovell was appointed executive director of the President’s Committee on the Arts and the Humanities, a presidential advisory committee, working with chairman and former Congressman John Brademas and with honorary chair Hillary Rodham Clinton. In 1997, she joined First Lady Hillary Rodham Clinton’s staff, first as deputy chief of staff then as director of the White House Millennium Council, where she and Mrs. Clinton created Save America’s Treasures, the first major preservation program in 20 years. After the White House, McCulloch-Lovell went to the American Folklife Center at the Library of Congress to found the Veterans History Project, collecting the firsthand accounts of those who served in wartime.

McCulloch-Lovell has published numerous articles and speeches on the arts, education, and the cultural history of Vermont. She has participated on National Endowment for the Arts grants panels and testified before Congress on behalf of public funding for cultural life. She also served on the Board of Regents of the American Architecture Foundation, the National Science Foundation’s Biology Advisory Committee, and on the Association of Vermont Independent Colleges. She continues her civic engagement as chair of the Smithsonian’s Advisory Committee for the Center for Folklife and Cultural Heritage, and as a board member of Vermont Parks Forever, the Warren Wilson Friends of Writers, and The Frost Place. Her first book of poems, Gone, was published by Janus Press in 2010. 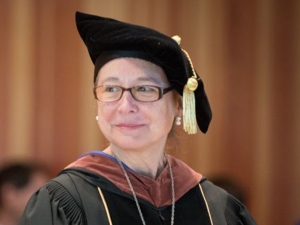 Read her full article at the Chronicle February 26, 2012