After earning a bachelor’s degree in natural science from Bennington in 1942, Joan Hinton entered graduate study in physics at the University of Wisconsin. While working there, she was recruited for the Manhattan Project—the U.S. government program to develop the atom bomb at a secret laboratory in Los Alamos in New Mexico. There, she worked with Enrico Fermi and was assigned to a team that built reactors for testing enriched uranium and plutonium.

Hinton was one of the few women on the project. She was not among the official party invited to watch the first testing of the bomb, but she managed to sneak away on the back of a motorcycle to a hilltop 25 miles from the blast site to visit the first detonation.

She worked on the project assuming that the bomb would be used only as a demonstration to force a Japanese surrender. After the bombings of Hiroshima and Nagasaki she became an outspoken peace activist. Hinton sent the mayors of every major city in the United States a small glass case filled with glassified desert sand and a note asking whether they wanted their cities to suffer the same fate.

After the war she studied with Fermi as a fellow at the Institute for Nuclear Studies at the University of Chicago. In 1948, alarmed at the emerging cold war, she gave up physics and left the United States for China, then in the throes of a Communist revolution she wholeheartedly admired. She remained a committed Maoist throughout her life.

In China, she met her future husband, Erwin Engst, a Cornell-trained dairy-cattle expert. The two were among a small group of American expatriates drawn to China in the 1940s and 1950s by revolutionary fervor who stayed on as government-sanctioned “foreign experts.”

They worked at numerous Chinese dairy farms, he as a breeder while she designed and built machinery. Hinton perfected a continuous-flow automatic milk pasteurizer and other machines and ended up working on a dairy farm and agricultural station outside Beijing for the last 40 years of her life, tending a herd of approximately 200 cows.

Once the Cultural Revolution began, Hinton and her husband worked as editors and translators in Beijing. During the McCarthy era, her name surfaced as a possible spy after she spoke at a peace conference in Beijing, although there was no evidence to show that she passed secrets or did any work as a physicist in China.

In an interview with The Washington Post in 1978, she laughed off the rumors: “What a silly fuss. When I arrived in the liberated area of China, they had nothing. We scoured the battlefields for old metal to make cooking pots. The last thing in anybody’s mind was the development of the atom bomb.” And in a 2002 interview with NPR, she said she never regretted her move to China: “I’ve taken part in two of the greatest things of the 20th century—the development of the atom bomb and the Chinese revolution. Who could ask for anything more than that?” 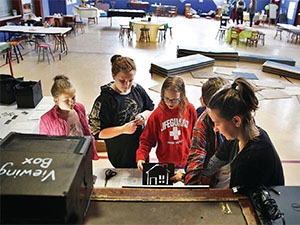