Sara Rudner is a dancer and choreographer who participated in the development and performance of Twyla Tharp’s modern dance repertory in her role as founding member and principal dancer beginning in 1965. She later founded and directed the Sara Rudner Performance Ensemble, from 1976 to 1982. Her recent choreographic projects include Dancing-on-View, one of a series of dance marathons, and Heartbeat, a fusion of technology and dance. Currently, she is a member of the dancers’ consortium Ersaloly Mameraem. Her past collaborations have included work with Mikhail Baryshnikov, Bennington faculty member Dana Reitz, and Christopher Janney. Rudner has choreographed for theatre and opera productions at the Public Theatre, the Salzburg Festival, the Santa Fe Opera, and the Paris Opera.

Rudner’s work has been awarded a Bessie award, a Guggenheim fellowship, a Dance Magazine award, and support from the National Endowment of the Arts and the New York State Council on the Arts. Since 1999, she has served as chair of the dance department at Sarah Lawrence College. 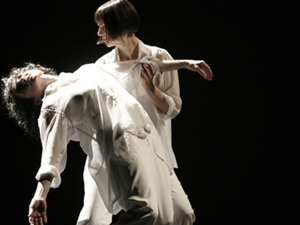