Susan Rethorst’s choreographic work has been performed worldwide; she is equally renowned as a dance teacher and an influential figure in the video documentation of dance performance. Her 2012 book, A Choreographic Mind: Autobodygraphical Writings, was named one of the best books of that year by The New Yorker.

Rethorst’s work has been presented by The Museum of Modern Art, The Kitchen Center, Dance Theater Workshop, Danspace Project at St. Marks, and The Downtown Whitney Museum, among others, as well as at various dance theaters, universities, and festivals throughout the United States. Internationally her work has been produced by The Holland Festival, Spazio Zero Rome, The Kunsthalle Basel, The Aix-en-Provence Festival, and Jerusalem's Room Festival, among others.

Rethorst was among the first to receive a New York Dance and Performance Award (“Bessie”) for Outstanding Achievement in 1985. In further recognition of her choreographic achievements, she has been the recipient of numerous grants from the National Endowment for the Arts, as well as support from the Creative Artist’s Public Service Program, the New York State Council on the Arts, the Foundation for Contemporary Performance, the New York Foundation for the Arts, the Ernie Pagnano Memorial Fund, and the Joyce Mertz Gilmore Foundation. She received a Guggenheim Fellowship in 1999, a second Bessie award in 2008, and in 2010 she received the prestigious Alpert Award. 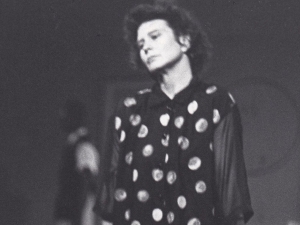