To proceed successfully through Bennington, a student must meet the academic requirements outlined in this handbook. Concurrently, students must progress adequately each term, move through the curriculum with broad goals for achieving a liberal arts education and, within that context, with the more focused goals of developing both an area of primary interest and the ability to do advanced work in that area.

Academic advising is central to this process and active participation in advising makes it possible for students to make appropriate choices in their program of study.

Academic progress at Bennington is both quantitative and qualitative. Bennington’s evaluation of academic progress is in accordance with federal regulations and is completed by the Office of the Provost and Dean at the end of each term in four ways:

After each academic term, student records are reviewed for academic progress as noted above. Students who do not meet satisfactory progress standards are notified (along with their families, when permitted by law. See Family Educational Rights and Privacy Act (FERPA) Annual Notice. Students who are at risk of academic progress difficulties remain in Good Standing but receive a designation of “notice.” Students facing more severe challenges to their academic progress may be placed on academic warning or may be dismissed. A student may appeal academic dismissals as described below. Explanations for each designation of academic standing follow the sections on quantitative and qualitative standards.

Success in meeting the quantitative standard is evaluated by measuring cumulative pace, which is the term used to describe the ratio of a student’s cumulative credits earned to cumulative credits attempted; it measures how quickly a student is progressing toward graduation within the expected amount of time. Students must earn 128 credits to meet the credit requirement for graduation.

According to federal regulations, students who complete less than 75 to 80 percent (depending on term standing) of the total expected credits will not maintain the necessary cumulative pace to graduate within the maximum amount of time allowed and will lose good academic standing. The chart below details the minimum number of credits needed at the end of each full-time term at the College in order to maintain the necessary cumulative pace. 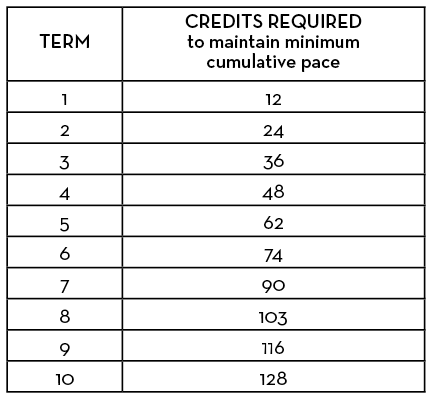 In addition, at the conclusion of any term, any student earning a pace of 50 percent or below for the term (e.g., earning 8 or fewer credits in a single term) may be placed on academic warning or be dismissed from the College.

After careful consideration with the faculty advisor, a full-time student may elect to take a reduced course load of 12-15 credits for an occasional term, with the understanding that credits will be made up in future terms. Of course, a student’s cumulative pace toward graduation is affected when fewer credits are taken in any given term.

Please note: In accordance with federal regulations, any withdrawal from the College, regardless of the reason, after the term has started will result in 0 credits earned out of 16 attempted and Cumulative Pace calculations will have to be adjusted accordingly.

Students will generally lose good academic standing (see below) or be dismissed from the College if they fail 6 or more credits in a given term (for full-time students) or half a program (for part-time students). A failure in a 4-credit course combined with a marginal pass in one or more other courses in a given term, will also generally result in the loss of good standing or dismissal from the College, as will a term containing 6 or fewer credits of full passes (e.g., 10 credits of MPs and 6 credits of Ps). Students’ performance over the course of their time at the College will always be taken into consideration when assessing whether or not they meet the qualitative standard.

Any student who has academic difficulties in any course should discuss the problem with the instructor as soon as possible. Students should also bring the problem to the attention of their faculty advisor. The student also may discuss these difficulties with a member of the Office of the Provost and Dean.

In addition, students are required to submit Plan essays on time and have an approved academic Plan in place by the end of their fourth term; therefore, timely submission and approval of a student’s academic Plan is considered when evaluating qualitative progress. A student will generally lose good standing if a Plan is not approved, a Plan is deferred twice, a Plan is not in place at the end of a student’s fourth term, or a Plan is not progressing well. A student who fails to submit a required Plan essay in any given term will also generally lose good standing (see below).

In accordance with federal regulations, students are expected to have a cumulative average of C or above (or the equivalent) by the end of their second year. However, a student may have passed several courses in a particular area of study but still not be deemed able to pursue advanced work in that area; these decisions are made through the Plan process and with individual faculty members. In such cases, the student will be advised to propose another area of study and/or will be advised that one or more extra terms are necessary for graduation; in some cases, the student may be dismissed from the College.

The Office of the Provost and Dean determines each student’s academic standing after considering academic progress as described above. Any student whose work is not satisfactory or who has not submitted a Plan on time and obtained timely approval of a Plan, or who has not successfully completed the FWT requirement, may be placed on academic warning or be dismissed from the College.

Notice. Students in good standing may receive a notation of “notice” in order to alert them and their advisor that they need to pay particularly careful attention to their academic progress. Students with a “notice” designation are still considered to be in good academic standing.

Good Standing–Satisfactory Academic Progress Plan (SAP Plan). In accordance with federal regulations, students who successfully complete a term of academic warning or academic probation but are unable to regain the required minimum cumulative pace after just one term will continue on a SAP Plan until they regain a satisfactory pace. Students who only minimally meet the expectations to return to good standing from academic warning may be placed on a SAP Plan for the term following warning. Students following a SAP Plan must meet the terms of their SAP Plan; those who do not will be dismissed from the College.

Appeals following academic dismissal. Students who have been dismissed may submit an appeal to return for a term of academic warning  (if dismissed following a term of good standing) or probation (if dismissed following a term of warning or probation), which shall be determined by the Appeals Committee at its discretion. The Dean of Studies will advise the student in writing of the Committee’s decision, which is final. Normally, appeals are submitted within one year of the date of dismissal. Circumstances that may provide the basis for such a request include serious injury or health condition, or the injury, illness, or death of a parent or sibling, or other extenuating circumstances. The appeal to return on warning or probation must explain why the student did not achieve satisfactory academic progress and describe what has changed in the student’s situation to allow the student to achieve satisfactory academic progress during a term of warning or probation. Successful appeals will illustrate or provide concrete evidence that one’s situation has changed. Such evidence could include transcripts reflecting courses completed elsewhere or recommendations from employers, health care providers, or other members of one’s community, supporting the applicant’s assertion that they are prepared to meet the demands of full-time academic work. The College may require additional materials following the review of an appeal. If an appeal is not taken or is not granted, the student is dismissed. Students are normally limited to one such appeal during their time at the College. Students who are dismissed following a term of probation, however, may submit a second appeal if they experienced extenuating circumstances during the term of probation that are different from those cited in their first appeal. Stipulations noted in the academic probation section above also apply to second terms of probation.