Friday, Oct 1 2021 7:00 PM Saturday, Oct 2 2021 2:30 PM America/New_York Think Tank on Continuing Education in Prisons Bennington College is convening a think tank of leading prison educators, formerly incarcerated people who benefited from prison education, and others who are interested in hearing about and discussing PEI’s continuing education program with a view to replicating, expanding, and building upon it. Bennington College

One of every seven people in prison in the United States—a total of more than two hundred thousand people—is currently serving a life prison term, more than the entire prison population in 1972, before the advent of mass incarceration. —The Meaning of Life, Marc Mauer and Ashley Nellis

For prisoners of color, this number is one in five. These figures include those serving life without the possibility of parole, and “virtual” lifers, as defined by a sentence of fifty years or more.

This think tank at Bennington College will include leading prison educators, formerly incarcerated people who benefited from education in prison, representatives of the Department of Corrections, criminal justice scholars and reformers, and others who are interested in discussing continuing education programs for lifers with a view to replicating, expanding, and building upon it. These experts will discuss how to measure outcomes, the benefits to individuals, to the institutions concerned, and the different models of how to deliver this education.

Marc Mauer is one of the country’s leading experts on sentencing policy, race, and the criminal justice system. He has directed programs on criminal justice policy reform for more than 40 years and recently retired as executive director of The Sentencing Project, a national non-profit organization engaged in research and advocacy on criminal justice policy. Mr. Mauer has written extensively and testified before Congress and other legislative bodies. He is the author of Race to Incarcerate, co-editor of Invisible Punishment, and most recently co-author of The Meaning of Life: The Case for Abolishing Life Sentences. Mr. Mauer is the recipient of the Donald Cressey Award for contributions to criminal justice research, the Alfred Lindesmith Award for drug policy scholarship, and in 2018 was selected as a Frederick Douglass 200 awardee. 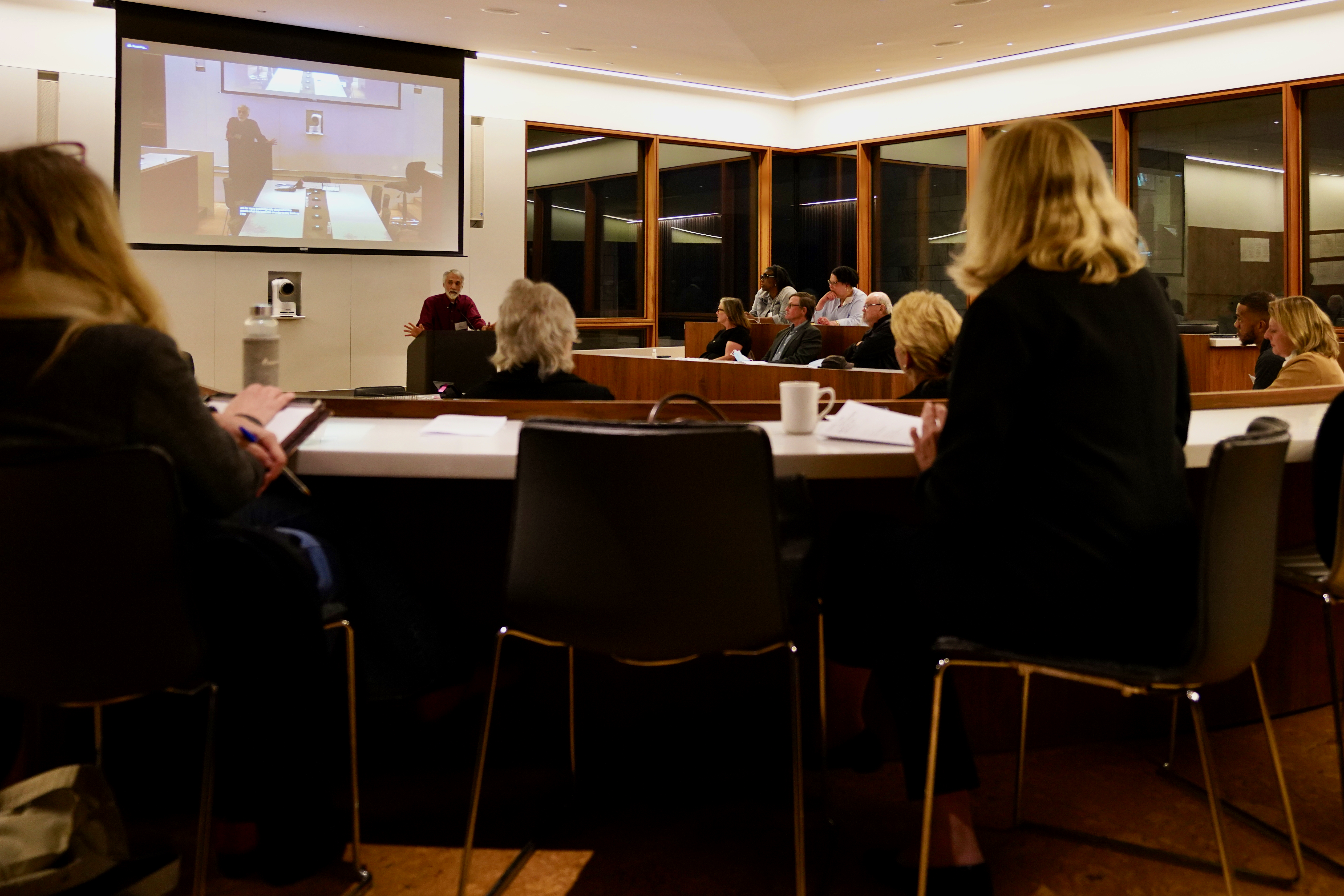 FREE AND OPEN TO THE PUBLIC

Neil Barsky is chairman and founder of The Marshall Project, the Pulitzer Prize-winning journalism non-profit covering the American system of criminal justice. He has had a varied career in the fields of journalism, finance, film and philanthropy, winning a Loeb award for his Wall Street Journal coverage of the collapse of Donald Trump’s business empire. Mr. Barsky also directed the critically-acclaimed documentary film Koch, and has taught economics at Oberlin College. He was founding chairman of the board of overseers of the Columbia Journalism Review.

David Bond (moderator) is associate director of the Center for the Advancement of Public Action at Bennington College, where he teaches on the environment and public action. Trained as an anthropologist, he studies oil spills and their imprint on environmental science and governance. He is co-founder of the Bennington College Prison Education Initiative (PEI).

Emily Bessette began her career in corrections as a teacher in 1997. She has held the titles of education supervisor, assistant director of education, and in 2017 became the director of education for the Department of Corrections and Community Supervision in New York. She holds a MS in Education from SUNY Plattsburgh and attended St. Lawrence University in order to become certified as a School Building Leader (principal). She fully supports college for the incarcerated population.

Rev. Albert Dancy was incarcerated at Somers State Prison (a maximum security prison), where he earned a Bachelor of Science degree in Management Science, and in 2018, he returned to graduate school at the University of New Haven with a concentration in Criminal Justice, graduating in January 2021. Rev. Dancy served as the executive director of Serving All Vessels Equally (SAVE) For 15 years and as prison chaplain at the Bridgeport Community Correctios Center. He also serves on the Juvenile Justice Policy and Oversight Committee and is a member of the Criminal Justice Reform committee under the guidance of Congregations Organized for a New Connecticut (CONECT). He continues to mentor boys and men of color through local and national initiatives affiliated with the National Alliance of Faith and Justice.

DeAnna Hoskins is president of JustLeadershipUSA (JLUSA). Dedicated to cutting the US correctional population in #halfby2030, JLUSA empowers people most affected by incarceration to drive policy reform. A nationally recognized leader and dynamic public speaker, Ms. Hoskins has been committed to the movement for justice, working alongside people impacted by incarceration for nearly two decades. Ms. Hoskins believes in collective leadership, advocacy for justice reinvestment, and bold systems change.

Daniel McGloin co-leads the Center for Prison Education (CPE) at Wesleyan University. As academic development and planning manager, he is responsible for curricular planning, faculty recruitment and support, overseeing student advising and admissions, as well as managing relationships with CPE’s internal and external stakeholders. He is also interested in the connection between higher education in prison and epistemic injustice and teaches philosophy for the Bard College Clemente Course in the Humanities.

Kate Meloney is the director of Villanova University’s Program at SCI Phoenix which provides incarcerated men the opportunity to obtain an AA and BA degree in general liberal arts studies. Her commitment to creating a safe and engaging learning space for those inside prison has been developed over an eighteen-year career dedicated to social justice and to those impacted by the justice system. Her expansive experience includes working with the District Attorney’s homicide unit to advocate for those traversing the court system, creating parenting programs for incarcerated parents, and developing legislation to create safer birthing practices for incarcerated women.

Rev. Edwin Muller has spent the past 50 years working in New York State Prisons both as an employee and volunteer.  He was Chaplain to Green Haven Prison, Regional Ministerial Program Coordinator, and Acting Director of Ministerial & Family Services. He founded The Exodus Program in 1968 and still works with the program. His book, Education for Liberation: The Politics of Promise and Reform Inside and Beyond America’s Prisons (2019) describes his early work in helping to start the first college program in a New York State prison. The first chapter in the book was written by Max Kenner of Bard College.

Rev. Vivian D. Nixon is a writer and poet. She has written about social justice for the New York Times, USA Today, Newsmax, The Hill, and the Sacramento Bee. A PEN American Justice Writing Fellow, she earned a MFA from Columbia University School of Arts and recently co-edited What We Know: Solutions from our Experiences in the Justice System (The New Press). Recently retired from her position as executive director of College and Community Fellowship, she is a writer in residence at the Square One Project at Columbia Justice Lab, and is a visiting faculty member at Bennington College. 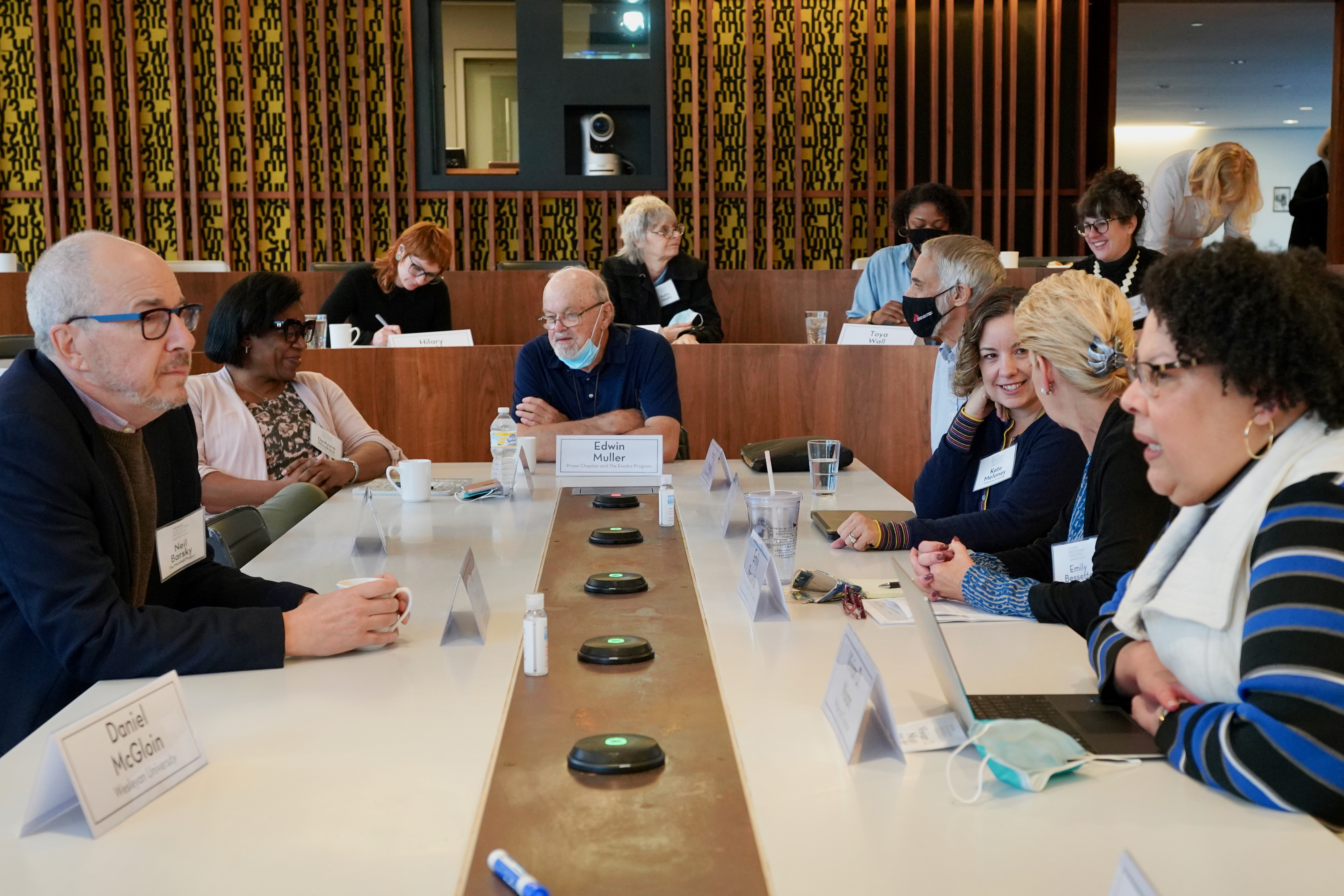 This event is made possible through the generous support of the Jacob and Valeria Langeloth Foundation.