On Monday, January 19th at 8 pm, The Public Theater will present The 24 Hour Plays®: A Bennington Alumni Tribute to Nicky Martin. This one night–only benefit will bring together Bennington College alumni—including Emmy, Tony, and Golden Globe winners and nominees—to write, cast, rehearse, and present six one-act plays within a 24-hour period. The event kicks off The 24 Hour Plays® 20th anniversary season. 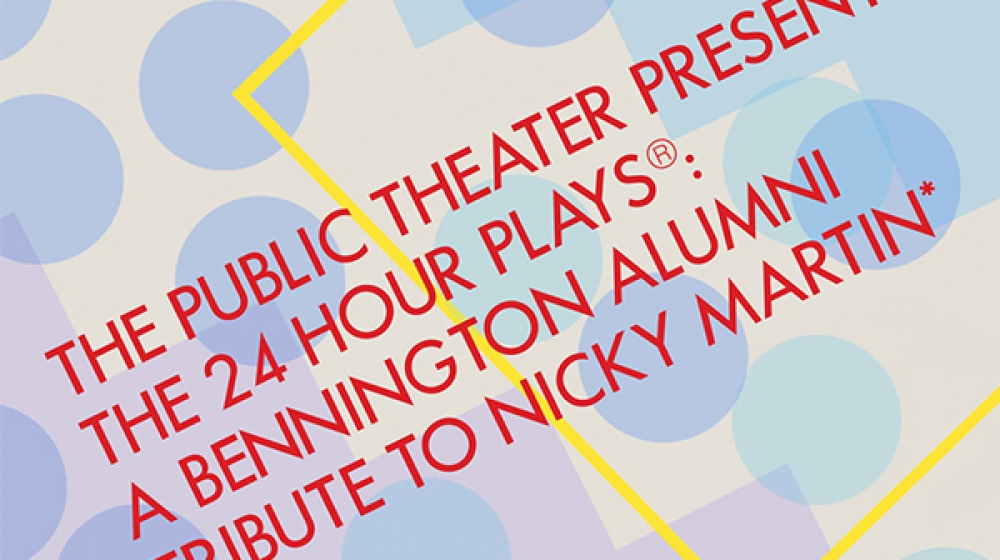 Proceeds will help establish an endowed scholarship at Bennington College in tribute to Tony-nominated and Obie Award–winning director and beloved former faculty member Nicky (Joel) Martin. Martin taught at Bennington College from 1984 through 1991; he worked at The Public most recently as the director of “Why Torture is Wrong, and the People Who Love Them.”

“The Public Theater is honored to welcome Bennington alumni and the 24 Hour Play festival to pay tribute to the incomparable Nicky Martin,” said Public Theater Associate Artistic Director Mandy Hackett. “Nicky graced our theater with his incandescence, his gifts for his storytelling, his integrity, and indomitable spirit. Establishing a scholarship in his name will be sure to inspire generations of future theater-makers as Nicky did for so many of his students throughout the years. During my time at Bennington Nicky was my teacher and inspired me with his love of craft, vitality, and spark.”

Alumnus and Tony nominee Brooks Ashmanskas jumped at the chance to be a part of the project: "Honor Nicky (Joel) Martin with a bunch of old pals from Bennington in an evening that follows the brilliant and exciting 24-Hour Plays' format? Sounds like heaven. I’m in!”

Bennington College is a liberal arts college in southwestern Vermont that distinguished itself early as a vanguard institution within American higher education. It not only was the first to include the visual and performing arts in a liberal arts education, but it also was the first to integrate work in the classroom with work in the field. To this day, Bennington stands apart in requiring that every student— every winter term—get a job, complete an internship, or pursue an entrepreneurial experience. Students have recently spent Field Work Term at theaters including The Groundlings Theatre & School (Los Angeles, CA); Long Wharf Theatre Company (New Haven, CT); Studio Theatre and Woolly Mammoth Theatre Company (Washington, DC); Second City Theater (Chicago, IL); and The Public Theatre, Second Stage Theatre, and Signature Theatre Company (New York, NY). Bennington’s theater program was recently highlighted by the Princeton Review and Backstage magazine as among the best in the nation.

About The Public Theater

Under the leadership of Artistic Director Oskar Eustis and Executive Director Patrick Willingham, The Public Theater is the only theater in New York that produces Shakespeare, the classics, musicals, contemporary and experimental pieces in equal measure. The Public continues the work of its visionary founder, Joe Papp, by acting as an advocate for the theater as an essential cultural force, and leading and framing dialogue on some of the most important issues of our day.  Creating theater for one of the largest and most diverse audience bases in New York City for nearly 60 years, today the Company engages audiences in a variety of venues—including its landmark downtown home at Astor Place, which houses five theaters and Joe’s Pub; the Delacorte Theater in Central Park, home to its beloved, free Shakespeare in the Park; and the Mobile Unit, which tours Shakespearean productions for underserved audiences throughout New York City’s five boroughs. The Public’s wide range of programming includes free Shakespeare in the Park, the bedrock of the Company’s dedication to making theater accessible to all; Public Works, a new initiative that is designed to cultivate new connections and new models of engagement with artists, audiences and the community each year; new and experimental stagings at The Public at Astor Place, including Public Lab; and a range of artist and audience development initiatives including its Public Forum series, which brings together theater artists and professionals from a variety of disciplines for discussions that shed light on social issues explored in Public productions. The Public Theater is located on property owned by the City of New York and receives annual support from the New York City Department of Cultural Affairs; and in October 2012 the landmark building downtown at Astor Place was revitalized to physically manifest the Company’s core mission of sparking new dialogues and increasing accessibility for artists and audiences, by dramatically opening up the building to the street and community, and transforming the lobby into a public piazza for artists, students, and audiences. Key elements of the revitalization an expanded and refurbished lobby; the addition of a mezzanine level with a new restaurant lounge, The Library, designed by the Rockwell Group.

The LuEsther T. Mertz Charitable Trust provides leadership support for The Public Theater’s year-round activities; Bank of America, Proud Season Sponsor of Shakespeare in the Park; The Harold & Mimi Steinberg New Play Development Fund at The Public Theater Supports the Creation and Development of New Plays; The Philip and Janice Levin Foundation - Lead Supporter of The Public’s Access and Engagement Programming; The Time Warner Foundation, Founding Sponsor of The Emerging Writers Group; Delta Air Lines, Official Airline of The Public Theater; New York Magazine is the official print sponsor of The Public Theater’s 2014-2015 downtown season; Public support is provided by the New York City Department of Cultural Affairs; the New York State Council on the Arts, a state agency; and the National Endowment for the Arts, an independent federal agency.

About The 24 Hour Plays®

The 24 Hour Plays® is a long-running institution in New York and international theater, but its work is always fresh and new. Creator Tina Fallon intended The 24 Hour Plays® to be a one-time-only event when it debuted on Manhattan's Lower East Side in 1995. Twenty years and thousands of plays and musicals later, The 24 Hour Company produces these time limited events on Broadway and in cities all over the world, including in New York, London, Los Angeles, Chicago, Florence, Dublin, and Athens.