The Class of 2016 Hits the Ground Running

Plans for the members of the Class of 2016 range from publishing to public service to academia to the professional realm, and include work at organizations ranging from the Smithsonian Environmental Research Center to StoryCorps. Bennington College celebrates their successes and looks forward to seeing what they’ll do next 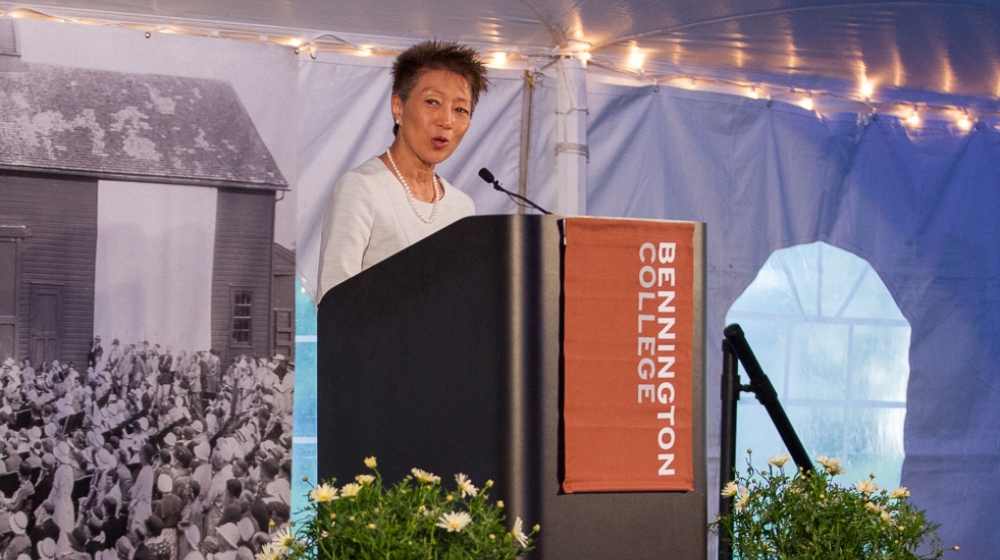 Bennington College is the only liberal arts school in the country that requires its students to complete an internship or other work experience that is integrated with their plan of study every single year. During Field Work Term in January and February, students fan out around the country and the world to test their acquired knowledge in the field. This year’s graduating class worked all over the US—over 30 states— and in 34 countries, including Argentina, Armenia, Bosnia and Herzegovina, Cambodia, Chile, Ecuador, India, Israel, Nepal, Norway, Rwanda, Turkey, and Thailand.

The Class of 2016 spent time at such places as some of the most vital arts organizations in the country (the Signature Theatre Company, the Philadelphia Institute of Contemporary Art, the Bronx Museum of the Arts), centers for scientific research (the Arnold Arboretum at Harvard University, the Coweeta Hydrologic Laboratory, the Centers for Disease Control, the Paleoecology and Biogeography Lab at the University of Oregon), high profile literary organizations and publishers (City Lights Publishers, Knopf Doubleday Publishing, the Kirkus Review, Vanity Fair) and public policy, advocacy, and development organizations (the Leadership Institute at the New York Open Center, the Gulf Restoration Network, and multiple NGOs in Africa, Asia, and South America).

While a sizable number of students traveled the country and the globe to deepen their understanding of the issues that engaged them most urgently, many others worked locally. Over their four years at the College, graduating students have engaged with the town of Bennington and its surrounds in meaningful ways, through work with a range of sustainable food projects, environmental advocacy groups, the Berkshire County Head Start program, the Quantum Leap program at Bennington’s Mt. Anthony High School, the Vermont State House, and the State Legislature.

The Class of 2016 has not waited for graduation before writing and publishing professionally.

Molly Kirschner has published two collections of poetry while a student—Hard Proof came out in 2015 and Notes for Further Research will be released next year, both by Red Mountain Press. Selections from both volumes have been translated into Italian for publication on the noted poetry websites Perigeion and Atelier. Kirschner’s writings have also been published in Poetry Quarterly Magazine, Torrid Literature Journal, The River Poets Journal, Rufous City Review, and on Ms. magazine's blog.

Other students, including Prashansa Taneja, Kieran Najita, and Isabelle Parker, have published essays, poetry, and fiction in The Millions, The Awl, Grub Street, and similar national outlets.

A number of graduating students took part in the Bennington College Museum Fellows program while students: a semester-long opportunity to live and work in New York City, embedded in cultural institutions—such as The Brooklyn Museum; Cooper Hewitt, Smithsonian Design Museum; Museum of the Moving Image; and The Bronx Museum of the Arts—while also doing intensive readings about museums and the mechanisms by which cultural value is assigned under the tutelage of Bennington College faculty.

Other members of the Class of 2016 found their way into the world of museums in different ways. Rocco Farano and Abby Mahler were part of a team of students who worked with Jonathan Kline to curate a show of street photography at the Bennington Museum. Meanwhile, Harlan Steed, Eli Back, Chris Bussolini, Jonah Nigro, and Trevor Stannus had works included in the Bennington Museum’s 3D Digital Design Now exhibition.

Jonah Nigro and Caroline Stinger have not waited til graduation to make an impact on the world of design. Nigro has been creating animated web content for advertisements and social media for national brands including Perrier and MTV, and his work has aired during the MTV Video Music Awards and on New York City billboards, as well as exhibited in a public art exhibition in Paris. After graduation, he will continue his work as creative director of the startup Utami, creating interactive installations for brands like Adidas. Meanwhile, Stinger, who established the knitwear design company Knitsugi during her most recent Field Work Term, had a design of hers—a sweater in support of Bernie Sanders’ bid for democratic nominee for president—go viral on the internet, drawing hundreds of thousands of hits and a slew of inquiries by people interested in commissioning other work.

In the realm of music, the musical ensemble Scareababe, composed of graduating seniors Rainjana Haynes, Dale Hoagland, and Danielle Radacovsky-Pentoney and junior Kathryn Henderson, will continue their successful careers by touring the US this summer.

The World of Public Service

A Bennington education includes an emphasis on finding creative approaches to the most urgent problems that face their communities, ranging from the local to the global.

Hannah Brookman, Emily Coning, and Timna Jahoda Kligler worked with faculty members Jon Isherwood and Susan Sgorbati, as well as other classmates to design a sculpture for the new US embassy in Oslo, staking out a position related to the balance of environmental and economic imperatives relating to fossil fuel production, and the international tensions over claims to the Arctic territory, and other issues.

Roi Ankori-Karlinsky, a member of the Bennington College Incarceration Task Force, argued that strict suspension and expulsion policies in public schools cause significantly more harm than good in an op-ed in the Rutland Herald.

In the wake of revelations of the presence of PFOA in water in New York and Vermont, Bennington faculty and students sprung into action to study the problem. Thanks to a nearly $90,000 grant from the National Science Foundation, students took part in a new course that allowed the College to conduct original research on PFOA. While the municipal water supply in Bennington, which supplies the College, has tested safe, concern for the welfare of residents who have been affected by this emerging environmental issue has motivated a robust response by our faculty and students.

Among the graduating seniors who have won national award and fellowship competitions this year are Nicolina Lazetic, who was selected to attend the Bucknell Seminar for Younger Poets, a highly selective program determined by a national competition for undergraduate writers, and Prashansa Taneja who has been named a 2016 Davis Peace Fellow by Middlebury Language Schools.

Among the Bennington graduates who are heading off to do further research and graduate work are Prashansa Taneja, who will be entering an MFA program in creative writing at Dartmouth; Alex Kouré who will be working at the Smithsonian Environmental Research Center on a method for creating statistical models of tree growth based on large monitoring datasets; Rebecca Warzer, who will pursue interdisciplinary work at NYU combining neuroscience and dance; and Mieke Vriejmoet, who will be working with the federal Agricultural Research Service in eastern Oregon.

Now entering its third year, the Kilpatrick Fellowship program welcomes new graduates beginning July 1 to work in the offices of Admissions, Buildings and Grounds, Communications, Office of the Provost and Dean, Institutional Advancement/Alumni Relations, and the President’s Office. Class of 2016 grads Beatrice Ugolini, Dane Whitman, Madeline Cole, Tessalyn Morrison, Arden Jordan, and Cristina Valdivieso will be professionally mentored by members of the Bennington College’s senior administration in order to prepare them for a career in higher education and nonprofit management.

After a vote at the June meeting, it was announced that Ben Simpson will be serving a 2-year term on the College’s Board of Trustees. Simpson, a military veteran, has worked with Roi Karlinsky on the Incarceration Task Force, and including testifying before the Vermont State Legislature and working to address the school-to-prison pipeline.

“We Confidently Recommend Them”

At the conferring of degrees on Saturday, June 4, President Silver read Bennington’s traditional commencement statement, which included the following passage: “We shall continue to follow these students with interest and affection as they take their roles in other communities, To those communities we confidently recommend them. At Bennington, we shall miss them."

Congratulations to the Class of 2016.