Class of 2018 Hits the Ground Running

Bennington College celebrated the achievements of the Class of 2018 at Commencement this year with speaker Liz Lerman, who bestowed upon graduates a series of wishes for their futures.

“What are these graduation speeches? Am I supposed to give you advice? Blessings? I landed on this idea of a wish, because it feels...Not so burdensome. It feels also like something like a neutrino: It can move through you, if you decide you want it or not. And maybe if you say it fast, it's just like a breath,” said Lerman, a choreographer, performer, writer, and educator whose work emphasizes research and collaboration across disciplines and media.

“You will stand up and find your voice”

“As you step out into the world—and it is full, a big, huge world—you will be leaders,” Lerman said. “You will stand up and find your voice. You are going to do radical, radical, radical things. I wish for you to also realize that we share it, we share this world. And you may have to pull back. You may have to get smaller. You may have to turn around and realize you're not the story. And with that, I wish you a beautiful, beautiful next period in life.”

Lauren Omokheoa ’18 was this year’s Class Speaker, and Stephen Shapiro was the faculty speaker. Enjoy Commencement photos, see Lerman, Omokheoa, and Shapiro’s speeches, and watch the conferring of degrees. 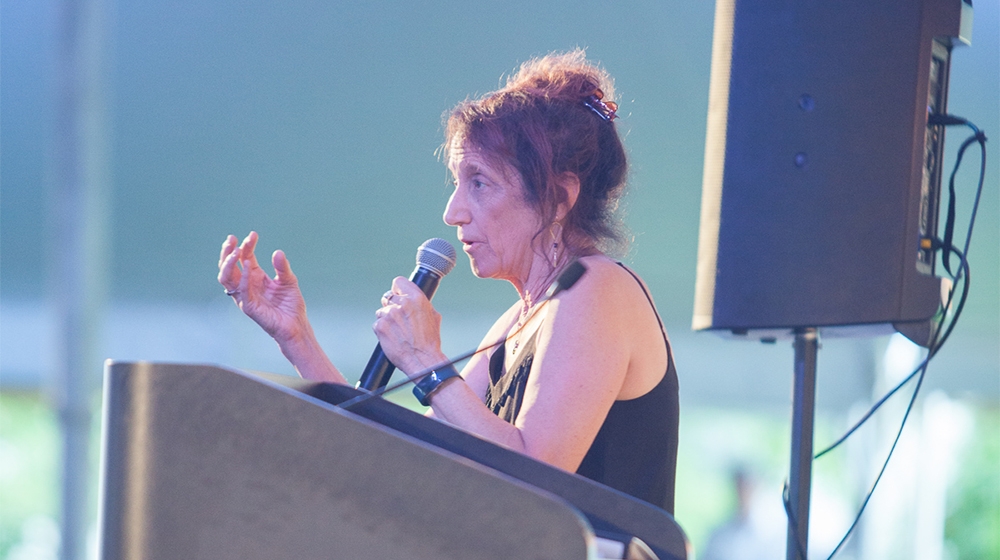 Liz Lerman Addresses the Class of 2018

On Campus & In Town…

The class of 2018 has left its mark both on campus and in the broader Bennington community. Through contributing to the Literary Bennington blog, they have traced Bennington’s outsized impact on the world of literature. Minahil Ghafoor ’18 interviewed Glenn Horowitz ’77 about a rare F. Scott Fitzgerald manuscript. Jonah Daniell ’18 explored North Bennington history through a Shirley Jackson walking tour. Annika Kristiansen ’18 culled through Bennington’s literary archives to discover a Letter to the Editor of the College’s former alumni magazine, Quadrille, by Andrea Dworkin ’68. Krisztina Hogye ’18 wrote on a little-known collaboration between Bret Easton Ellis ’86 and artist Matthew Brannon. Blair Blumberg ’18 conducted an interview with novelist, short story writer, and Wallace Stegner Fellow Ottessa Moshfegh. Wesley Haaf ’18 captured the Bennington Review’s legacy with an interview of past staff and editors.

Isabella Poulos ’18 devoted her time at Bennington to studying the intersection of food, art, and community, with work that culminated in a community cookbook and potluck.

During her time at Bennington, Jocelyn Salcedo ’18 founded the FLoW initiative, formed by the FLoW Student Union and Working Group, which seek to provide first-generation, low-income, and working-class (FGLIWC) students on campus with a supportive community within higher education. Through annual programmings such as socials, informational panels, and presentations, the organization empowers FLoW students to reclaim spaces that have been historically denied to them.

Jocelyn’s thesis explored the cultural mismatch between FGLIWC students and American colleges and universities. Part of her thesis served as the theoretical framework for “Student Perceptions of Campus Climate by Social Class Background” in the upcoming book Evaluating Campus Climate at U.S Research Universities: Opportunities for Diversity and Inclusion.

She will present the book chapter, along with faculty member Deborah Warnock, at the Working Class Studies Association Conference in June 2018.

Since 2016, Joana Santos ’18 has helmed the development of the Bennington Seed Library, an educational and resource-sharing platform for community members on campus and beyond to access seeds. The Seed Library has been featured on WAMC and in The Bennington Banner; participated in Root Skills, a conference about environmental grassroots organizing; tabled at the Bennington Farmer’s Market; hosted Seed Fest, a weekend-long family-friendly event; and was awarded a grant from the New England Environmental Grassroots Fund to expand its outreach.

As a way to present scientific research in an engaging, hands-on fashion, as well as to engage the local Bennington community, a group of students led by Shana Crawford ’18 presented Scientificus, a pop-up science museum.

Jorja Rose ’18 has devoted extensive time and research to tackling the PFOA contamination in the region. She received a portion of the NSF Emergency Response Grant for her PFOA research during Field Work Term in 2017 and 2018 and published an op-ed with faculty member David Bond in The Bennington Banner and Vermont Digger.

Graduates also worked with alumni in their fields, extending the Bennington network across generations alongside luminaries like Ben Hall ’04, Andrew Bartle ’76, and Adnan Iftekhar ’97.

Members of the class of 2018 were also among the inaugural fellows of The Lucille Lortel Foundation Fellowships in Theatre, a pilot grant program offering paid internships during FWT in off-Broadway non-profit theater companies for exceptional Bennington drama students.

Twelve fellows, including Tristan Harness ’18, Lilianna Hogan ’18, Lecil James ’18, Samuel Levit ’18, and Lulwama Mulalu ’18 worked at Abingdon Theatre Company, The Flea Theater, Mint Theater Company, and The Lark, cultivating a deeper, more practical understanding of the theater world. This pilot was so successful that the Fellowship will now be an ongoing partnership.

Museum Fellows Term, an immersive educational opportunity in which students gain professional work experience at a major cultural institution, visit exhibitions, and study multiple aspects of the art world with Bennington faculty, and meet artists, curators, and other arts and culture leaders, continued its expansion in 2018 to include the Studio Museum in Harlem among its partners.

Mary Roth ’18 was first author on her presentation at the Massachusetts EPA 2018 meeting, "Image Analysis Resolution and Reliability of Wasting Disease Monitoring," in which she discussed methods by which to monitor the health of sea grasses, essential for coastal marine resilience. The work derived from her FWT experience at the Marine Science Center at  Northeastern University.

From revitalizing a historical landmark to pioneering new forms of digital storytelling, members of the class of 2018 have been recognized for the innovative ways they are changing the world.

Bennington students were instrumental in revitalizing the Robert Frost Stone House Museum after the College gained stewardship of it in December 2017. Sophie Parker-Goos '18 spent this past FWT at the Robert Frost Stone House Museum identifying trees on the property. Over the course of spring term, she created an educational tree field guide and identification book for the museum. She has received the North Bennington Fund Grant for this project, which will go toward making copies of the tree field guide that will be available at the property.

Ayesha Raees ’18 has been selected as an Asian American Writers’ Workshop 2018/19 Margins Fellow. AAWW is the preeminent national arts nonprofit dedicated to the belief that Asian American stories deserve to be told. As a Margins Fellow, Raees will publish in AAWW’s online magazine The Margins, receive career mentorship and support, and build a community of fellow writers.

Raees identifies herself as a hybrid creating hybrid poetry through hybrid forms. Her work strongly revolves around issues of identity, class, and race while possessing a strong agency for accessibility, education, and change. During her time as a Margins Fellow, she wishes to focus on not only generating new creative work but also instigating dialogue around revolutionary contemporary practices in a fixated traditional literary and academic world.

This project, which explores Muslim identity and perception through the experience of an airport secondary screening, was included as part of the immersive Storyscapes lineup at the 2018 Tribeca Film Festival.

Many graduating students will use their Bennington education as a springboard for advanced studies in architecture, Japanese, environmental science, philosophy, and more. The inquiry, research, creativity, engagement, and communication skills they honed through the Plan process will be put to use at such prestigious institutions as the University of Cambridge, Middlebury College, and the Graduate Institute in Geneva, Switzerland.

In October 2018, Lauren Omokheoa ’18 will begin her Master of Philosophy in African Studies at the University of Cambridge. There, she will continue her research on corruption and prebendalism in Nigeria, which she capstoned at Bennington with her thesis “Disrespected, Unprotected, and Unfulfilled: The State of Human Rights in Nigeria.”

Samuel Levit ’18 will delve into a Summer Intensive for Japanese at the Middlebury Language School.

Khumboh Kaluah ’18 will pursue an MA in Development Studies at the Graduate Institute in Geneva, Switzerland, beginning in September 2018.

Melodi Var Ongel ’18 has been accepted to both the London School of Economics and University College London’s Human Rights program.

Since Bennington’s founding, students have graduated equipped to influence places and matters of great personal and public importance. Named after William Heard Kilpatrick, an advocate for progressive education in America and one of Bennington’s founders, the Kilpatrick Fellowship program prepares new graduates for careers in higher education and nonprofit management.

After a campus-wide nomination and application process and a final vote at the May Board of Trustees meeting, it was announced that Nejla Katica ’18 will be serving a 2-year term on the College’s Board of Trustees.