Welcoming an incoming class of about 200 students, Bennington College’s convocation speaker, college librarian Oceana Wilson, urged those gathered in the Usdan Gallery on Tuesday to look to the future.

Class of 2016, you leap now, you land four years from now. Embrace the possibilities in each of you. Know that Bennington College will enlarge not only your mind but also your heart and your Bennington education will be a love affair or a lover’s quarrel or perhaps — and I think most ideally — it will be both. - Oceana Wilson

Wilson, director of library and information services at the college’s Edward G. Crossett Library, was named one of 10 winners of the American Library Association’s “I Love My Librarian” award in 2009.

During her remarks, she talked about the elm trees that used to be common on Bennington’s rural campus until they became diseased around 1950 and had to be removed. She said she had heard a story about a man who seemed to embrace one of the trees on the day they were to be cut down.

Over time, she decided the lesson to be learned was that the man had faced the loss of the trees even though there was nothing he could do to prevent it.

Wilson was introduced by Elizabeth Coleman, president of the college, as someone who promised a “response to any suggestion no matter how outlandish” and who had made the library a hub of activities, concerts and creativity.

“Here’s the deal: The library at Bennington has a very special kind of music. Be sure you hear it,” she said.

Students got an early look at the college’s unconventional nature. The convocation opened with the traditional performance by retired music faculty member Milford Graves, playing percussion, and Bruce Williamson, balancing a saxophone performance with walking through the crowded auditorium on stilts.

Students coming to the college from all over the country and the world seemed as excited to start their career as faculty, staff and administrators were to welcome them to campus.

Incoming freshman Amalya King, of California, said she wanted to come to Bennington College because “it seemed really awesome.”

“(It was) the unique people, the small size, the programs,” she said.

As a student studying music and language, Jake Landau of New Jersey, said he liked being able to mix different interests and “just explore.”

Batamuriea Sharon, of Rwanda, came to Vermont to study the unusual combination of international relations and theater studies.

“It’s a special school where you learn what you want and what’s your passion. You follow your dreams,” she said. 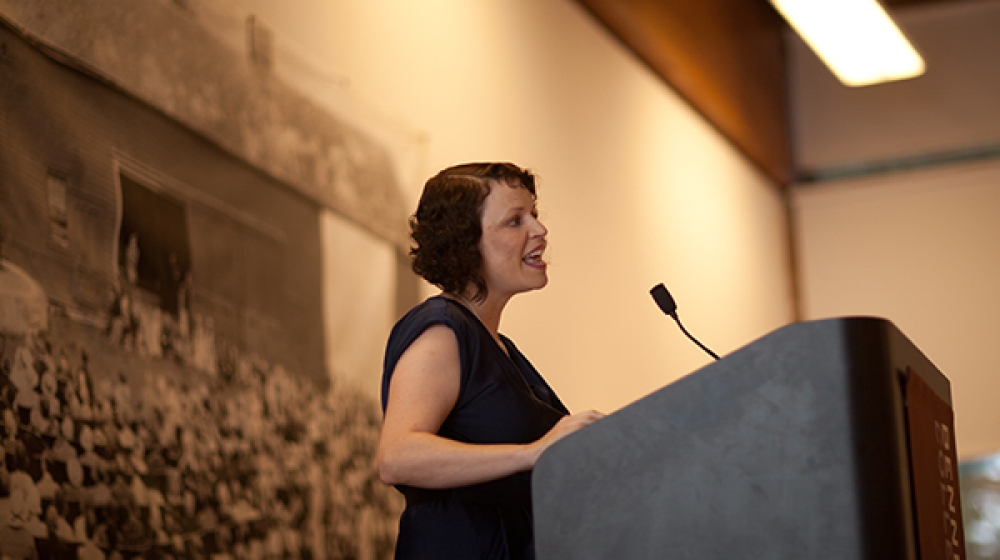 "Logically, Bennington shouldn't exist. But here we are."