Rohail Altaf '17 and Asad J. Malik '19 were recently awarded a $3000 prize at the Vermont Hackathon for creating an app that uses Artificial Intelligence (AI) to improve student engagement in online courses. The pair opted for general entry, rather than as a student team, in order to be able to compete in the overall pool, against agencies and tech companies.

Vita connects an individual student in an online course with another student taking the same course. It facilitates a conversation between them, based on interests; the students then are able to offer each other support and and hold each other accountable.

The app also scans the words the students are using to identify problems and shares those findings and trends with the teacher. For example, if student communications are using words like “confused” or “stuck,” along with “quiz” and “problem 3,” this sentiment analysis would prompt the professor to check to see if problem 3 on the quiz needed clarification.

“Imagine if every teacher could have 30 TAs,” said Altaf, in illustration of how that support could benefit educators. 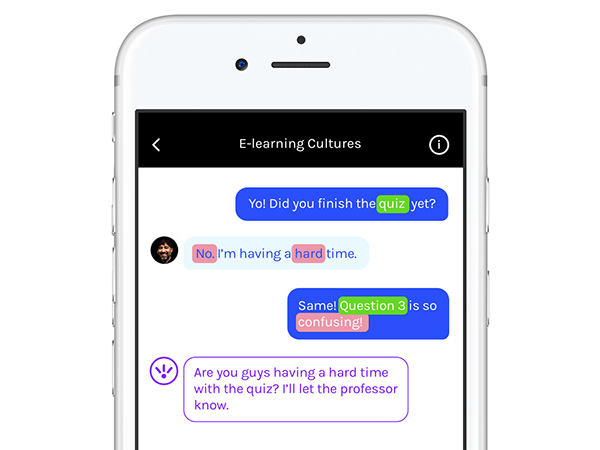 “Artificial Intelligence is currently not complex enough to replace human interaction,” said Malik. “Using AI, not as an endpoint, but as a means to facilitate and enrich human communications really felt like a breakthrough.”

“There’s been a lot of conversation about the grand promise of AI, but it isn’t being applied to education as often as other sectors,” said Altaf. “Coming from a family of educators, and seeing how the benefits of education are limited to the top of the socioeconomic ladder at home in Pakistan, finding a way to expand access is meaningful to me.”

Considering that only about 10% of people who start online courses complete them, Malik and Altaf felt that improving engagement could have a huge impact on retention rates.

The developers felt that there was “no limit” to how this could grow--teachers could add upload background information and data sets relevant to the course content, to help Vita support the students.

The pair is considering continuing to both refine the app and also to work on the AI engine that powers it.

Last year, both Altaf and Malik were on the Bennington College team at the Vermont Hackathon. They won the best student team with an app called Grow.

Altaf is currently studying computer science, design, and music production. He previously participated in the Future Studio course. He is graduating in the spring.

The focus of Malik’s work at Bennington is augmented reality design. He is studying architecture, graphic design, neuroscience, and programming. As a first year student, he launched an app, Noema, to provoke global conversations.