Meeting Held to Update the Community on PFOA Information, Research

On Wednesday, June 29, the Vermont state Department of Environmental Conservation (DEC) hosted a community meeting at Bennington College to discuss the ongoing PFOA issue in the region. David Bond, associate director of CAPA and principal investigator of the College's research on PFOA, provided an update on the work thus far.

The meeting was led by DEC Commissioner Alyssa Schuren. Also participating were Deputy Commissioner of the Vermont Department of Health Tracy Dolan; Stu Hurd, the Manager of the Town of Bennington; Steve Goodkind, the Chair of Water Board of the Village of Bennington, as well as other state officials and engineers consulting on the project. Presenters discussed preliminary engineering reports for municipal drinking water line extensions in North Bennington and Bennington to service homes with private wells with elevated PFOA levels. They also reviewed new information about PFOA contamination around the town landfill, provided updates on the blood clinics and water sampling results, and solicited feedback from citizens. Over 130 residents were in attendance.

Bennington College is currently engaging on the issue of PFOA through support of a Rapid Response grant from the National Science Foundation.

Commissioner Schuren, Chuck Schwer of the Division of Waste Management and Prevention, and Richard Spiese, hazardous sites manager for the Vermont Agency of Natural Resources and point person for the efforts in Bennington, North Bennington, and Shaftsbury, praised work of the College, and emphasized how helpful it is to the state to have a local partner working on the issue.

What a great resource to have in your community, truly a very strong partner in helping us answer this [question] Vermont DEC Commissioner Alyssa Schuren

David Bond, the principal investigator and associate director of the Center for the Advancement of Public Action (CAPA), provided an update on the College’s work thus far:

In terms of original research, the College is monitoring clusters of homes with very different readings once a month for a year to see how levels of PFOA might be fluctuating over time. Bond reported that they are conducting this experiment with a cluster of homes in North Bennington, VT; Hoosick Falls, NY; and Petersburgh NY.

Two students, Will Buchanan ‘16 and Cleo Zars ‘17, also presented their ongoing research projects on PFOA at the meeting.

The College will be offering the course Understanding PFOA in Our Water again in the fall.

The State announced that the next public meeting would take place on July 27. 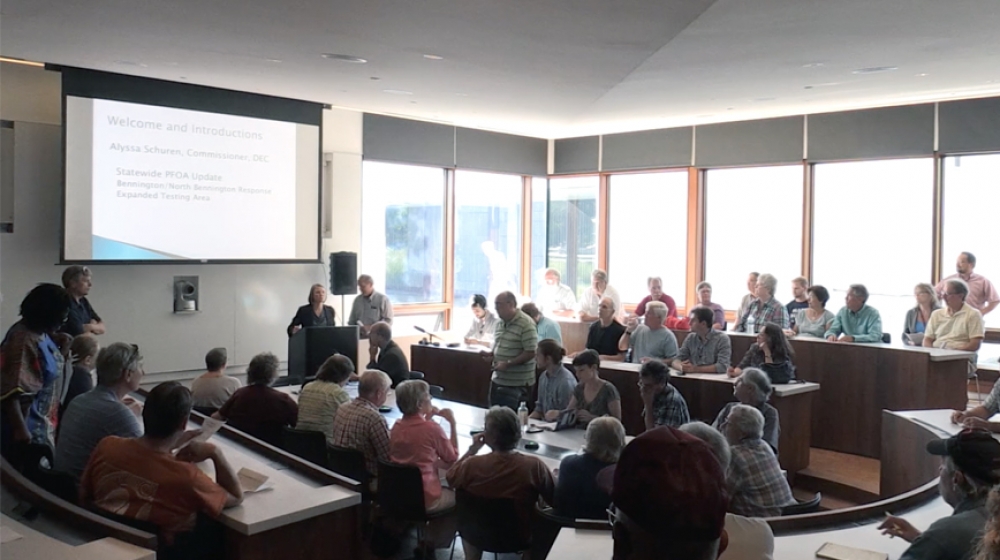