A Message on Roe v. Wade

There is nothing more radical than the body.

We’ve seen that throughout our history, but never more so than today with the Supreme rolling back 50 years of precedent and overturning Roe v Wade and a person’s right to decide what is best for them during a pregnancy.

Let’s be very clear here. Our rights are under attack, today in the most callous way by a Supreme Court that is at odds with our values, fully aware of the license that state legislatures will now take.

Our democracy is fraying. Today, rather than moving forward together we seem to be on the defensive, as more and more rights that we fought for are under attack.

We must speak out – and act out.

A few years ago, Anne Thompson, the director and curator of the College’s Suzanne Lemberg Usdan Gallery and a member of the visual arts faculty, created the “I-70 Sign Show,” a public arts project in Missouri that used billboards to showcase the work of some of the world’s most important artists, with images and messages that spoke to critical issues.

One of the billboards, by the artist Aleksandra Mir, had the very direct message, Keep Abortion Legal. The design was simple, a basic font in pastel hues.

But the message is very powerful. 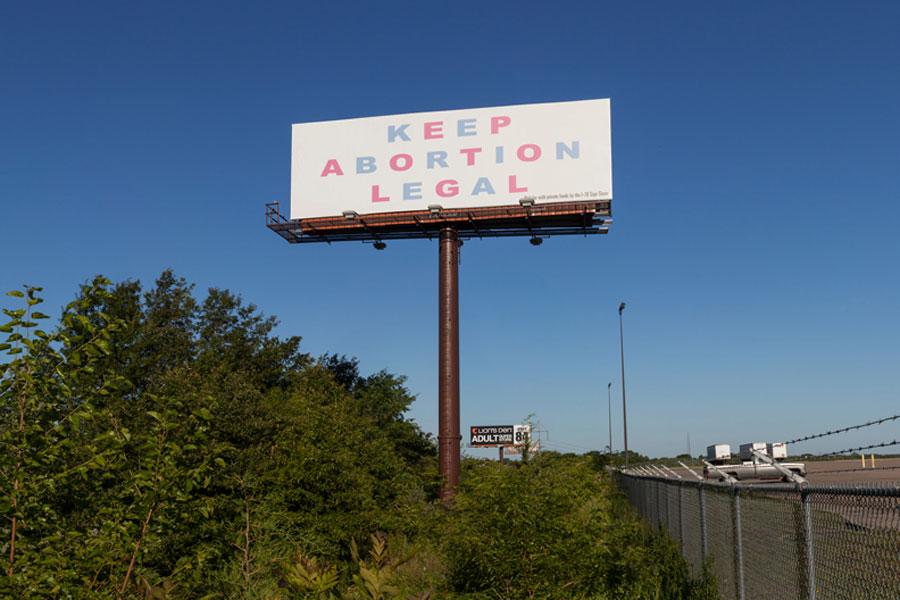 At the time, Mir has said that she created the design because the pro-choice movement lacked a visual representation of its message, though anti-abortion activists often used aggressive rhetoric and imagery.

The simplicity speaks to the urgency here, as did the I-70 Sign Show installation in mid-Missouri, an area where drivers would be more accustomed to ads that take the opposite point of view.

Art has a way of asking us to think differently, which is why we need to support these projects that bring attention to critical issues like choice.  A simple statement—no explanation needed—can spark a conversation, a conversation a movement, and a movement change.

Images and messages are critical to this process, asking us to speak out about issues like choice but equally how we rally people to vote to protect their rights and the very idea of democracy.

Elena Demyanenko, in her commencement remarks, spoke eloquently about our bodies as political statements—and how we can utilize them to act. “Our bodies are,” she told us, “designed to learn.”

“Opening yourself to think with all your senses in order to embrace the full multi-dimensionality of the embodied experience is key: the body that is aware and noticing, eyes open, is the body that makes a choice to resist hate and servitude, and instead cultivate the capacity for pleasure and care.”

The Supreme Court decision today is very much one about our bodies— who controls them, what we can do with them. There is, as I started, nothing more radical than the body.

In Vermont, access to reproductive services will remain. But even here, with Planned Parenthood closing four centers, including the one in Bennington, we anticipate it will be harder for students to access these services. We are looking at ways to utilize our new Nurse Practitioner position, which will begin this fall, to offer reproductive and sexual health services.

We will be providing more information on services we can help with as we approach the new academic year.

In the meantime, register to vote. Get involved in your local communities. And let your voices be heard