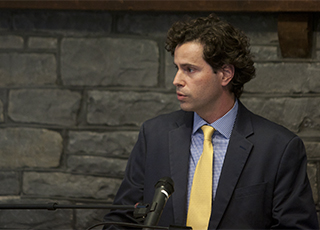 Duncan Dobbelmann has served as Bennington's Chief Communications Officer since September of 2017. Prior to joining Communications, Duncan worked for seven years in the Provost and Dean's Office, most recently as Associate Provost and Dean of Studies, overseeing among other things the Plan process, advising, institutional research, visiting faculty, and the accreditation process — as well as, at points, Field Work Term and registration. In this role he participated in curricular planning and the framing of academic and institutional policies.

Before coming to Bennington in February of 2009, Duncan was Director of the Learning Center at Brooklyn College and taught literature at Brooklyn College, Baruch College, and New York University. He holds a BA from Vassar College, a PhD in English from the CUNY Graduate Center, and has published translations in journals such as Boston Review, Grand Street, Harper’s, and Provincetown Arts; fiction in Conjunctions; and a chapbook of prose poems called Tronie. He has published an article on the poet George Oppen in Paideuma, co-authored (with Isabel Roche) an essay on the Bennington College curriculum for The College Curriculum (Peter Lang), and written about pop-up courses for The Chronicle.