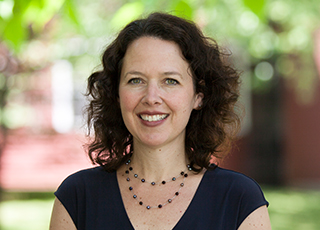 Dr. Isabel Roche was appointed Interim President of Bennington College on July 1, 2019 and served until August 1, 2020. Prior to her appointment, Dr. Roche served as Provost and Dean of the College for eight years (2011-2019) and taught French language and literature at Bennington for eight years (2002-2010). Before joining the faculty at Bennington, she taught at Williams College, The Cooper Union, and SUNY Stony Brook.

Dr. Roche’s leadership has been marked by a period of curricular and academic renewal. A highly collaborative leader, Dr. Roche spearheaded initiatives that created critical new institutional partnerships, greater faculty participation in shared governance at the College, and helped usher in major philanthropic support. She has emphasized, nurtured, and supported teaching excellence and deep student mentorship—hallmarks of a Bennington education. In her time as Provost and Dean, the College launched new academic programs and initiatives widely recognized as some of the most forward-thinking in the country. From the establishment of Pop-Up Courses on critically-important issues of the day, to the expansion of work-integrated learning efforts, and innovations to reimagine the classroom, Dr. Roche has played an integral role in Bennington’s distinguishing academic advancements.

During her tenure, Bennington’s writing and literature programs have seen a significant expansion. She helped establish Poetry at Bennington, which brings both accomplished and emerging poets to campus each term for multi-day residencies, as well as an undergraduate writing fellowship that provides Bennington students the opportunity to participate in the prestigious graduate Writing Seminars. In 2018, the Writing Seminars instituted with her guidance a low-residency graduate teaching fellowship. And, working closely with literature faculty, Dr. Roche renewed Bennington’s commitment to publishing The Bennington Review and incorporated the making of a major journal directly into the curriculum.

Dr. Roche has helped to secure major grants and gifts that enable Bennington’s many curricular innovations, such as a $4 million endowment for Poetry at Bennington; and multiple grants from the Andrew W. Mellon Foundation, including a $2.5 million consortium grant to support curriculum and programs focused on forced migration, a $1 million grant to support the College’s efforts to tackle the challenge of food insecurity in the Bennington region, and an $800,000 grant to strengthen the College’s progressive educational model. She also shepherded a donation that led to the establishment of a new Word & Image Lab, and worked with faculty on grants from the Sherman Fairchild Foundation which allow for continued innovation in the realm of art and technology. Dr. Roche has had a significant hand in developing the College’s partnership agenda, leading to the creation of opportunities such as the Museum Fellows Term and the Lortel Fellowships, as well as the College’s new partnership with the Middlebury College Language Schools.

In the last several years, Dr. Roche has led the College through the creation of new structures and support systems focused on furthering a culture of inclusion and community building. Guided by a deep belief in the power of mentorship, programs developed under her leadership put advising at the core of this work. Roche has overseen the introduction of First-Year Forum—a hybrid course and advising structure that helps first-year students acclimate to a Bennington education. She has expanded support services for international students, first-generation students, and underrepresented student groups—efforts that have contributed to the increase in Bennington’s six-year graduation rate to more than 70% of the student body.

Dr. Roche has represented Bennington in a myriad of academic consortia and organizations, and currently serves on the executive committee of the Consortium for Environments in Innovative Learning. In 2016, she participated in The Academy for Innovative Leadership in Higher Education (Georgetown University and Arizona State University). In 2013, she co-authored, “The Plan for Bennington: An (Ever) Emergent Curriculum,” published in The College Curriculum: A Reader (Joseph Devitis, ed. Peter Lang, 2013). Roche has been tapped to speak nationally about innovations particular to Bennington—from the College’s emergent structures, to inquiry based learning, alternative models for performance reviews, and the importance of international student recruitment at liberal arts colleges. Her thoughtful advocacy has led to greater recognition of Bennington’s critical role as a leader in higher education among its peers, with granting organizations, and by the media.

Dr. Roche is a scholar of the 19th-century French novel and French Romanticism. She is the author of Character and Meaning in the Novels of Victor Hugo (Purdue University Press, 2006) and has published articles in The French Review and French Forum, as well as in numerous collected volumes of essays. A noted scholar of Victor Hugo, Roche was invited to write the introduction and notes to the Barnes & Noble English-language publications of Victor Hugo’s Notre-Dame de Paris (2004), as well as for Gaston Leroux’s The Phantom of the Opera (2006).

Roche earned a BA from Bates College and her MA and PhD from New York University.