Noah Coburn is a political anthropologist who focuses on Afghanistan and South Asia, studying violence, governance, and how people negotiate the overlap of politics, power, and culture.

Coburn is a socio-cultural anthropologist focusing on political structures and violence in the Middle East and Central Asia. At Bennington he teaches courses on the overlap of politics, power, and culture. He has conducted field research in Afghanistan, Kyrgyzstan, Uzbekistan, Nepal, India, and Turkey.

His book, Bazaar Politics: Power and Pottery in an Afghan Market Town (Stanford University Press, 2011), based upon 18 months of research with group of potters in the town of Istalif, some 30 miles north of Kabul, explains how various lineages of potters and other craftspeople in town worked together to maintain peace even while the insurgency grew rapidly in neighboring districts. This first full-length ethnography from Afghanistan since the 1970s was reviewed in The New York Times, The Financial Times, and elsewhere.

Coburn has conducted extensive research on elections and dispute resolution in several different provinces across Afghanistan. He is also author of Derailing Democracy in Afghanistan: Elections in an Unstable Political Landscape with Anna Larson (Columbia University Press, 2014) and Losing Afghanistan: An Obituary for the Intervention (Stanford University Press, 2016). His most recent fieldwork looks at the role of international contractors in the war in Afghanistan and what happens when they return home to countries like Nepal, India, the United Kingdom, and Turkey.

He has published numerous articles and reports for a variety of think tanks in Washington and Kabul, including the United States Institute of Peace, the Afghan Research and Evaluation Unit, and the Agha Khan Trust for Culture. Coburn received his doctorate in anthropology from Boston University in 2010; MA in regional studies, Columbia University; BA, Williams College. He has taught at the American University of Afghanistan, Boston University, the University of Michigan, and Skidmore College. Coburn joined the Bennington faculty in Fall 2012. He served as Associate Dean for for Curriculum and Pedagogy for the 2019-2022 academic years. 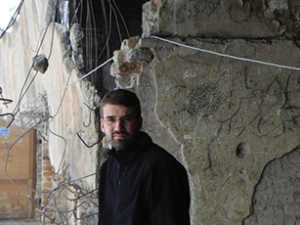 Social Inquiry in an Age of Upheaval: Noah Coburn