Erin McKenny is a collector, and everyone knows it. She collects walnuts and acorns, pressed Queen Anne’s lace, old mailbox numbers, felt samples, and quaint little “Made in Vermont” package stickers. Her office, shared with project manager Holly Andersen, is a cornucopia of textures and treasures sourced from across campus—Andersen, the big and rustic: steam pipes, paned windows, a box of hard hats. McKenny, the wild and small: a splintered wooden E, a “ringer” box, campus posters.

McKenny is the College’s design coordinator. She is one of the primary stewards of the College’s art collection and de-facto collector of all things Bennington. And she has been a part of decorating every space that has been moved or changed or updated or rethought at the College for the last 15 years.

Part decorator, part matchmaker, McKenny is always “on the hunt” for the rare and wonderful pieces that will make a space—an office, a lounge, a dining room—feel like home. Last fall, she (and most of the Buildings & Grounds team) went on the ultimate hunt in a hollowed Commons. They removed light fixtures, instruments, mailboxes, bells, garbage cans, wood slabs, mirrors, chairs, and more. From the hard to define to the totally unidentifiable—hundreds and hundreds of Commons artifacts found their way back to Buildings & Grounds before construction crews came to work.

Limited by space (and time) the team had to make choices about what they should save. Saved in this case means stored, and more often than not, restored. Objects or furniture or clothing that would not be put to use on campus were donated to a variety of nonprofit organizations throughout the community. And what could not be donated was offered to the campus and local community in a weeklong kind of free pile event in Martha Hill.

Many of the objects that came out of Commons will be restored and brought back into Commons when the building reopens. But already several of the objects have found a new home or have returned to their original use in the College’s new student Health Services Office and Dining Center. These are some campus favorites.

Counter Door
Most restored doors were salvaged from Commons, but others (second photo) were salvaged from an old cow barn on campus. This one in particular serves as the new counter at the campus post office. It is topped with a counter crafted by carpenters in Buildings & Grounds from felled trees on campus. The post office also retained its original backroom sorting cabinet and signs, which now adorn the doors and counter.

Reclaimed Commons doors are painted and connected to make partitions that block the dish-return and composting area in the temporary, open-space dining hall. Other doors were built into the dining-area feature wall in their original, unpainted state.

The yellow medical tray could have had a thousand homes, but this stunner has been in Health Services from the time the College opened the office. Dr. Randy Anselmo, director of Health Services, plans to continue to use it exactly as it is intended. Sometimes the best medical tray is an antique.

Waste Cans | Cup Dispensers
Medical Equipment
People get passionate about the cup dispenser, a simple and functional piece that was returned to Health Services in its new location. While the entire Health Services Office was moved, the medical offices were not refurnished. All of the exam rooms still use most of the equipment purchased decades ago, including the waste cans, cup dispenser, medical instruments, sand hourglasses, and even exam-room tables. 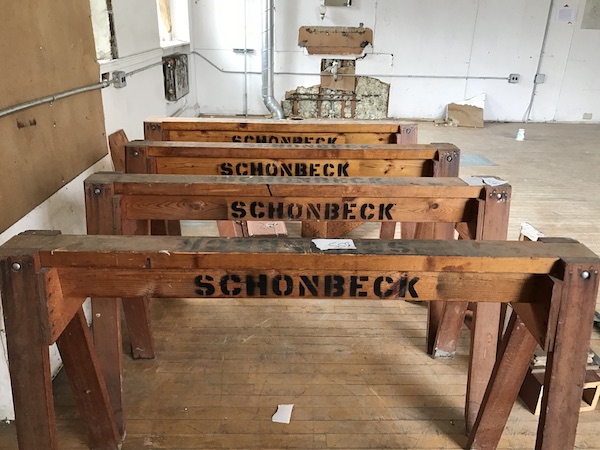 The Bench
Gunnar Schonbeck and his students were prolific music and art makers. Many pieces still remained on the third floor even after the massive inventory and restoration of most of the pieces by faculty member Nick Brooke and select students for the MASS MoCA exhibition. The remaining objects ranged from knockers to piano boxes to giant bells. There are still many plans in the works to integrate the objects in spaces throughout campus, but some of the pieces already have been brought into offices, including this weathered wood piece that was placed in the President’s Office middle lobby area. 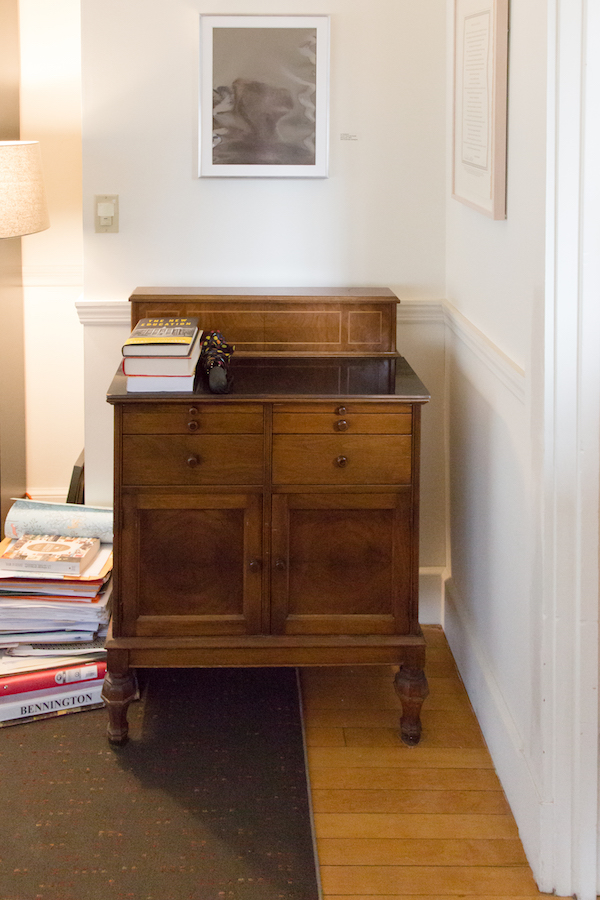 Some of the furniture removed from Health Services was brought into other offices. This medical cabinet is now placed in Provost and Dean Isabel Roche’s office.

Lights
The old Commons lights have found a new home in the Robert Frost Stone House Museum, which was gifted to the College in the fall. Buildings & Grounds spent some time in the spring restoring the stone house. In May, the house reopened to the public, programmed with readings and performances, exhibitions, and talks.