Güvenç Özel ’02 was the keynote speaker at Turkey Innovation Week in Istanbul last summer where Cypher—his most recent cyber physical sculptural installation—was exhibited, and conference attendees had the chance to interact with it. 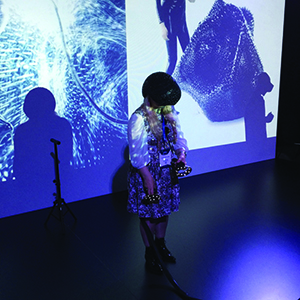 Cypher combines an interactive soft robotic body with a Virtual Reality interface. Interesting Engineering wrote a feature on the work of Özel in July 2019. The article titled “Güvenç Özel Creates a Robotic Installation Controlled by Virtual Reality” reports on how Özel uses artificial intelligence (AI), virtual reality (VR), sensor technology, 3D printing, and other emerging technologies in a practice that bridges many worlds. Interesting Engineering wrote, “Cypher establishes a bridge between the physical and digital worlds, collapsing them into the same experiential plane by synchronizing a virtual reality simulation with human-robot interaction. Through an infrared sensor array and a LIDAR (similar to technologies used in autonomous vehicles), the shape-shifting sculpture and has the ability to detect the proximity of the audience and change its shape accordingly. The beautifully designed Virtual Reality (VR) headset—which is more like a helmet—is tethered to the sculpture teleports the user to its interior. It is then when the user experiences a shift from object to space. Already within the VR realm, the user has the ability to change the shape of the robot through natural hand gestures. As the user changes the shape of the VR simulation, the robot moves in real-time, aligning the physical and digital transformations. The AI component allows for the sculpture to get more intelligent the more it is exhibited, using the number of interactions it has with the audience to build a memory archive and cumulatively shape its motion and behavior through time. Through the synthesis of these multiple technologies, the sculpture challenges the human notions of what is real versus what is virtual. The experience allows the user to travel between a multitude of realities simultaneously. The combination of multiple technological systems working seamlessly is what allows Cypher to exist simultaneously in the digital and the physical worlds. Cypher responds to changes in its environment both as simulation and as a material entity. Özel’s projects and experimental installations have been exhibited in museums and galleries in the United States and Europe. Özel formerly taught at Yale University, Woodbury University, and the University of Applied Arts in Vienna. His recent design and research on 3D printing was awarded one of the top prizes at NASA’s 3D Printed Habitats Competition.