Legends in the Attic

In October 1961, a little-known folk singer named Bob Dylan took to a tiny, cramped stage on the third floor of Bennington College’s Commons Building—and was promptly booed. As one eyewitness later recalled, it wasn’t the future legend’s music that upset the audience, but his late start: scheduled to open for the blues and gospel singer Reverend Gary Davis, Dylan began performing an hour later than expected (apparently because Davis had overindulged at their pre-show dinner, and needed to sober up backstage). But while the College’s folk fans were irritated at the wait, their frustration soon faded; as the eyewitness observes, “it took all of about 20 seconds to realize you were hearing an unusual musician ... his stage presence was just extraordinary.”

Famous though he is today, Bob Dylan is far from the only extraordinary presence to have made his mark on the third floor of Commons. Before the opening of VAPA in 1976, this area served as the College’s visual and performing arts space, and it hosted a steady stream of notable faculty members and visitors: architects, musicians, poets, painters, dancers, and more. In the College’s first five years alone, the third floor saw lectures and performances by luminaries such as Frank Lloyd Wright, Zora Neale Hurston, Buckminster Fuller, and e. e. cummings. (The latter was quite dazzled by his visit, later writing to his friend and fellow poet Ezra Pound that Bennington students “of all dimensions and costumes ... sit around each other’s rooms quaffing applejack neat.”) In the 1940s, 1950s, 1960s, and 1970s, major figures came to teach at Bennington: Paul Feeley, Erich Fromm, Peter Drucker, Richard Neutra, Jules Olitski, Karl Polayni, Sidney Tillim, and sculptors Sir Anthony Caro and David Smith among countless others.

In 1940, modern dance legend Martha Graham used the third-floor small theater stage to debut Letter to the World, a piece based on the life of Emily Dickinson. In a later review, New York Times dance critic John Martin exclaimed that the work was “one of the most beautiful creations yet to be revealed in the American dance,” the product of “a uniquely personal genius.”

But if the works performed on the third floor of Commons tended to earn effusive praise, assessments of the third floor itself tended to be less complimentary. In a different review of Graham’s work, Martin complained that the College’s “little temporary theatre ... is utterly inadequate for either dance or theatre productions of professional caliber. Its stage, though deep, is narrow and cramping, and its auditorium is anything but commodious.” The first head of the College’s drama department, Francis Fergusson, had similarly sharp words for the third floor: he once called it the building’s “scandalously inadequate attic.” His concerns were shared by Bennington’s first president, Robert Devore Leigh. In the mid-1930s, Leigh had architectural plans drawn up for a larger and more permanent theater—but the necessary funds never materialized.

In his account of the College’s early years, Bennington in the Beginning, historian and former faculty member Thomas Brockway notes that Leigh stepped down from the presidency in the spring of 1941 in part because he was frustrated by the large amount of fundraising that remained to be done for the still-young college; he was “particularly disappointed” that the new theater had never been built.

Penelope (Penny) Perkins Wilson ’45, who arrived at Bennington in the fall of 1941, not long after Leigh’s departure, would nearly 80 years later provide the vision, enthusiasm, and philanthropy necessary to completely transform the “scandalously inadequate attic.”

Our studio was one room off the dining room...of Commons, where we painted easel-to-easel on our own projects. Or as a group, confronted by a shivering model or dusty still life. Seminars in that studio were conducted in front of a bulletin board covered with color reproductions from art magazines. Helen Frankenthaler '49

Wilson chose the new and quite experimental school for two reasons: she wanted to “avoid ‘required’ courses,” and “to try [her] hand at art and science.” Her interest in art often led her to the third floor, where students in visual arts, architecture, and dance all worked in adjoining studios. Wilson’s memories of the busy, bustling space coincide with Brockway’s own recollections of how, in the College’s early days, the third floor served as a multidisciplinary forum for student work: “Three or four times a week,” he writes, “everyone climbed the Commons stairs to the theatre to hear a lecture or to find out what the dancers, actors or musicians had been up to.”

But the third floor began to lose its centrality in the 1970s, supplanted by VAPA’s more spacious art studios and theaters. By the late 1980s, the once-vibrant third floor needed to be closed because it was not in compliance with national fire code and ADA accessibility regulations. As time passed and years turned into decades, the attic of Commons became a shadowy place, its nearly 15,000 square feet used mostly for storage and little-seen by students—a half-remembered legend.

That’s where Wilson comes in. A current trustee and the Chair of the Campus Planning Committee, Wilson has been a driving force behind campus renewal for decades, encouraging the College both to preserve its architectural heritage and also to thoughtfully develop its physical plant. Because of Wilson, the College was able to renovate Cricket Hill into the Admissions building; to restore the original 12 student houses from the 1930s; to convert the campus heating system from an oil-based process to a much more environmentally friendly one; to build new student houses (one of which bears her name); and more. Her example has inspired other alumni to join in campus renewal efforts. 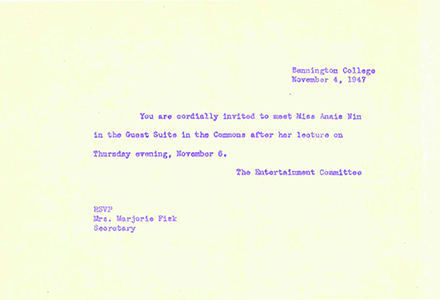 Last June, a comprehensive restoration of Commons began. Led by the New York–based architecture and design studio, Christoff:Finio, the third floor is one of the most striking beneficiaries of this transformation. The College’s Associate Vice President for Facilities Management and Planning, Andy Schlatter, explains that by remodeling the third floor, the College will gain 10 more classrooms, many of which will likely be used for humanities courses. Each classroom will have a unique shape, and their windows will look out over campus, revealing beautiful views that have been concealed for decades. In his remarks at the groundbreaking ceremony held last spring, Martin Finio of Christoff:Finio observed that the classrooms on the third floor “will become ... a visual symbol of Commons’ resuscitated role as a central space of learning.”

While the new classrooms will occupy the north section of the building (which faces the Barn) and the south section (which faces the Commons Lawn), the area in between these two sections will be the heart of the third floor. Located directly beneath the iconic Commons cupola, this large, open, high-ceilinged space will serve numerous purposes. A prime purpose, as Dean of the Library Oceana Wilson explains, will be providing students with a Peer Learning Lab, to give central space for peer instruction and collaboration. Elsewhere in this area, students will be able to showcase their work through a small stage on the site of the College’s original theater. This new venue will complement VAPA’s theaters instead of competing with them, providing an intentionally small space for intimate talks, rehearsals, and performances.

As Paige Bartels, Senior Vice President for Strategic Partnerships, notes, reclaiming the third floor has “enormous value to College in practical terms.” With its new classrooms, performance areas, and study spaces, the renewed attic will function as a kind of VAPA for humanities and social science students. At the same time, however, the decision transcends the purely practical. As Bartels observes, the third floor historically has been “a hallowed space—the pulse of a community known for its creativity”—and, as such, its thoughtful renovation affirms the College’s commitment to its founding principles. This is a place, Bartels observes, “where our very values are being enacted.”

At the groundbreaking ceremony, President Silver held up a set of keys to the third floor of the building—a set given to her by Katy Schonbeck ’95, daughter of beloved Bennington music faculty member Gunnar Schonbeck, who for decades used the third floor to create, play, and store his enormous, beautiful instruments. (Many of these instruments were gifted to MASS MoCA in 2011, where they are now part of a permanent, interactive display in the museum.) As she held Gunnar’s keys in the air, Silver said, “With these keys— and with this renovation—we are reopening this space to the creative, free, and innovative thinking that has so long been at the heart of Bennington.”