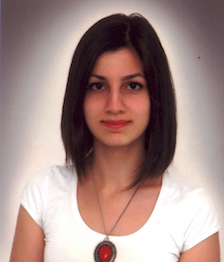 Diseps Apis is currently a graduate student and research assistant in Institute of Environmental Sciences at Bogazici University in Istanbul and plans to write her thesis on pollution prevention and cleaner production. She obtained her bachelor’s degree in Environmental Engineering last year from Middle East Technical University in Ankara, Turkey. In 2012, she volunteered at a youth camp in Germany working with youth from different countries such as Spain, Russia, Serbia for two weeks on the environment. She is a member of Ankara Circassian Association and helped organize conferences and panels, as well as met regularly to discuss problems of the Circissian people in both homeland and diaspora. 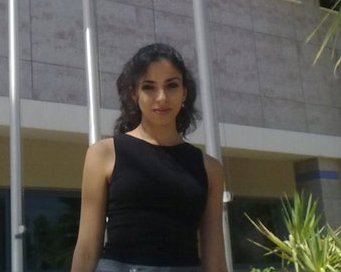 Raja Aziz is a Palestinian-Israeli from Jerusalem. A graduate student from The Ben-Gurion Research Institute for the Study of Israel and Zionism-Ben Gurion University. She received her BA in History and Political Science. Afterwards she student at the Arava institute; and wrote her project during her year on the Bedouin population within the Negev area in terms of their political situation and their environmental perception within the State of Israel. She contributed to the Peace Building and Environmental Leadership course with an interesting perspective and important insights. Following her study at the Institute, she then became a Program Associate at the Institute. Raja is passionate about enhancing her understanding of the different dimensions of the Palestinian and Israeli realities and displays bravery in her pursuit.

Sawsan Batarseh comes from a Jordanian family. Sawsan completed her B.Sc degree in Water Management and Environmental Sciences and has pursued her enthusiasm to expand her scientific knowledge base by bolstering her technical background in the water and climate change field; she completed a higher diploma for one year in environmental studies. Sawsan further completed her master’s degree in climate change.  During that time, she conducted the first longitudinal assessment of national rain patterns across the region and shifts in climatic regions.

At a professional level, Sawsan maintains broad experience in project management and team leading with different agencies. She worked with the United Nations Educational, Scientific and Cultural Organization (UNESCO) in the Science Sector, leading a number of diverse projects in science and technology, climate change adaptation, water management, disaster risk reduction and awareness campaigns, etc. She worked as a Team Leader for the first national study on groundwater use in Jordan with one of the United States Agency for International Development (USAID) projects. She occupied a Organizational Development Manager position with the same project supporting the Jordanian Ministry of Water and Irrigation for a better management of water recourses.

Currently, Sawsan is working as a consultant for water and agriculture USAID project with one of the leading local companies in environmental and water consultation in Amman. 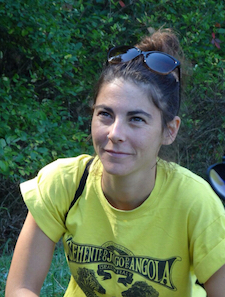 Shaya Bonstein is currently in her final year at the University of Haifa, where she will graduate with a BA in Anthropology and Sociology. From 2012-2013, she was a coordinator of the environmental activism training program in Megama Yeruka (Green Course). She graduated from the Arava Institute for Environmental Studies in 2012, and received her PDC (Permaculture Design Certificate) from Kibutz Lotan in 2011. For the past year, she’s been working with YEEPIE (Youth Environmental Education for Peace Initiative) organization, where she’s taught in a high school in Ein-Mahel village. She willcontinue her work with this organization next year. 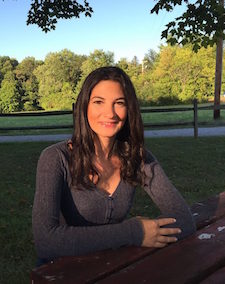 Senem Cevik is a Tobis Fellow at University of California Irvine Center on Ethics and Morality. She has taught public diplomacy classes at Ankara University and political psychology at Atılım University. Cevik has been a visiting researcher at University of Southern California, Center on Public Diplomacy –Summer 2013- and a visiting research scholar at University of California-Irvine, Program in Conflict Resolution (Turkey/Armenia)–Fall 2014. Cevik has participated in and has worked with the Olive Tree Initiative (OTI) with their Turkey-Armenia experiential learning program. Cevik is a fellow with the International Dialogue Initiative (IDI) and also serves on the committee of Turkey-Israel Civil Society Forum (TICSF). She is a blogger for University of Southern California Center on Public Diplomacy and 2015-2016 Contributing Scholar. She is the co-editor of ‘Turkey’s Public Diplomacy’ (with Philip Seib), Palgrave Macmillan, 2015. Her research interests are cultural diplomacy, citizen diplomacy and political psychology. 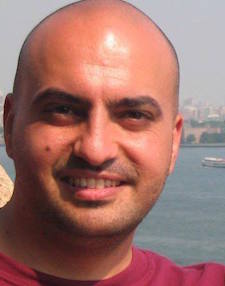 Suleiman Halasah is an electrical engineer with a BSc. from the University of Jordan, and a MSc. from Ben Gurion University. After completing his first degree, Suleiman served as a control engineer for the Jordan Valley Authority in the Jordanian Ministry of Water and Irrigation. In this position, he was responsible for the SCADA System in the Southern Ghors Irrigation Project. While working on his MSc., Suleiman continued his professional work in the field of renewable energy, water, and the environment. Suleiman became a co-founder of Global Sun Partners, a renewable energy company that works on building solar energy PV power plants in several countries in the world. Suleiman has served as a panel member on the topic of water security, renewable energy and climate change in several conferences. Suleiman established Integrated GREEN Solutions (i.GREENs) which aims to improve the environmental awareness and introduce green solutions in Jordan and the Middle East, and currently perusing his PhD research at Ben-Gurion University. 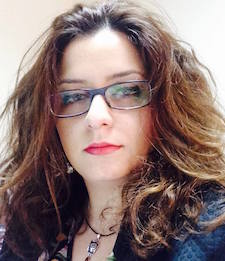 Ani Mnatsakanyan received her master’s degree in Built Environment at Malmo University in Sweden in 2012. She has Bachelor’s degree with Honour in Economics from Armenian State University of Economics, received in 2009. She has lectured and consulted for numerous programs and organizations, and has published articles on labor migration, energy security, gender issues, business, and public-private partnerships, among other topics. She currently holds a position of an expert at the Project Implementation and Management Unit for the International Center for Human Development (ICHD) think tank, where she is engaged in different projects being implemented by the organization. She is the ICHD representative for the Climate Forum East (2013- 2014) and Climate Forum East Phase II (since 2015) project lead by the Austrian Red Cross and partners in the Eastern Partnership (EaP) region. Climate Forum East and Climate Forum East Phase II aim to build the capacities of the civil society (CSO) sector in the EaP countries to contribute to global policy-making processes on climate change, to develop civil society in EaP countries, and to contribute to advancing EaP political priorities in the area of environment governance and climate change. ICHD’s huge capacity and expertise in peace-building, conflict resolution, large pool of international experts, and wide network are the big assets in the initiatives which aim to bring together the representatives from Armenia, Azerbaijan, and Turkey. 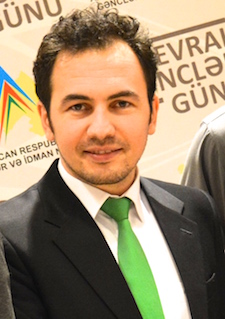 Elshan Nuriyev studied at Azerbaijan Agricultural Academy, specializing in Ecology & Nature use. He defended his PhD dissertation at the Institute of Soil Science and Agro-chemistry at the National Academy of Science of Azerbaijan, which focuses on ecological assessment of soil structures in the Goygol National Park and Ecotourism area. Elshan had fellowships at Dresden Technique University (2009, Germany) and at the Michael Succow Foundation (2015, Germany). He grew up in Ganja city and from a young age was actively involved in social works. As an activist for nature protection, he worked on projects in environmental education and nature protection from 2001 to 2014. He has given invited lectures/trainings on subjects like environmentalism and sustainable tourism at several institutions on local and international level projects. One of the first successful initiatives by Elshan was the first bicycle promoting actions in Azerbaijan, which included the establishment of the “Green Bikers” Club. He worked in “Bridge to the Future” NGYO, Azerbaijan Tourism Institute, WWF – Azerbaijan, and in 2008, founded an environmental NGO called “Nature Friends.” 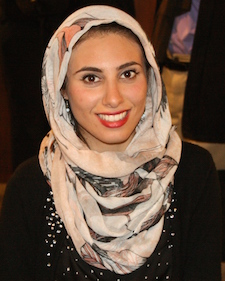 Alaa Obeid is currently working as an Environmental Development officer at local NGO called Palestinian Wastewater Engineers Group in Ramallah which works on water and sanitation projects to enhance the livelihood of marginalized communities. She graduated from Haddasah Academic College in Jerusalem with environmental health science bachelor degree in 2014. While pursuing her B.Sc., she has been an active member of Green Movement on campus, and was engaged in public awareness campaigns about the environment, solid waste and air pollution. Before working at PWEG, Alaa was at Arava Institute for Environmental Studies for a spring semester 2014 and was exposed to trans-boundary projects, environmental negotiations and mediation and tackled issues imposed by the occupation over the environmental situation in Palestine. Alaa is also active in social change and community organizing with the youth group Jerusalem Spirit Foundation. She lives in east Jerusalem and speaks 4 languages including Arabic, English and Hebrew.

Robert Petrosyan was born in Armenia in a small town called Dilijan. He graduated from Music school, Art school, and the TUMO creative center. He is currently studying at UWC Adriatic. He has been a member of the “Sunchild” eco-club where he developed skills in photography, journalism, film directing, and ecology. In 2013, he was awarded 1st place in the National Folk Music competition, and in 2011 received 1st place in a blogging competition. As a member of “Youth Bank” organization, he participated in a conference in Istanbul that aimed to share and exchange ideas, as well as to negotiate and interact with the neighboring countries of Turkey, Azerbaijan, Georgia, and Afghanistan. Robert has been a volunteer in YCAC youth club and has been a leader in English club. He was a volunteer in the EVS program, helping volunteers from Italy and Poland to carry out projects in cleaning and gathering unfit plants of “Jughtak” and “Matosavanq” churches. He has recently chaired the UWCAD MUN 2015 conference, and was one of the organizers of Project Week in Greece, which took place in a prison located in Trikala town and involved organizing activities for prisoners connected to art, music, creative writing, dancing, and theater. Last year, he went to Oratorio, a school for Bangladeshi refugees, where he assisted the students with their homework. The last event he participated in was “Golden Apricot,” an international film festival where he volunteered as a translator and an organizer. 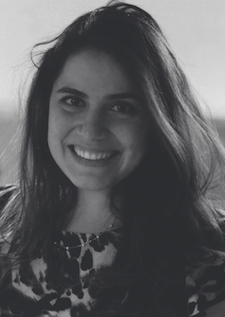 Additionally, her experience also includes evidence based pioneer impact and process study of empowerment based on non-formal education for out of school youth, environmental & water consumption behavior change campaigns, contingency programs in Jordan mostly funded by the US Department of Labor, Mercy Corps, UNHCR, UNICEF, GIZ and Oxford University.

Reem was the selected feature by the United State Department of State – Bureau of Education and Cultural Affairs – as Jordan’s 2012 Leader on “Inspiring Leadership and Civic Participation” in the International Visitor Leader Fellowship Program.

Vusal Zeynalov obtained his master’s degree in biochemistry at Jagiellonian University in Krakow, Poland in 2015. He participated in “Youth action for peace and security,” which was a model of a UN organization in New Mexico, Baku, and New York. He also participated in One Young World Summit 2014 in Dublin, and the World Forum for Democracy in Strasbourg, among other conferences and public dialogues. He organizes events including dance and movie clubs at Intelligent Citizen” Public Union, and periodically organizes tours for students for the Ganja Educational Information Center.