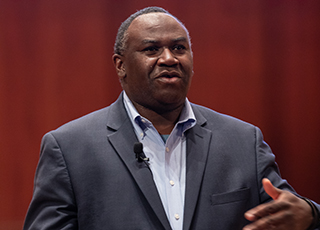 Maurice L. Hall, Ph.D. joined Bennington as Provost in July 2021. He earned a B.A. in Literature with honors from the University of the West Indies at Mona in Jamaica; a post graduate certificate in Journalism from Westminster University in London, England; and an M.A. and Ph.D. in Communication from Howard University in Washington, D.C.

In his research and applied work, Dr. Hall focuses on the social organizing of culture in the United States and in Jamaica, examining the intersections of public communication, media and the arts. He focuses on the mediated, social, performative, creative, and institutional aspects of Communication, emphasizing the organizing properties of Communication. In the United States, drawing on his training in Mass Communication, Media and Journalism, he focuses on the media as organizations. He is increasingly working with and examining local media and arts organizations and how they facilitate grassroots voices and responses to a variety of cultural and sustainability issues for under-represented and/or vulnerable communities. Drawing on his training in Organizational and Intercultural Communication, he uses methods linked to qualitative research such as interviewing, observation and oral history to examine the role of Leadership Communication in the creation and maintenance of Culture in two specific contexts: Jamaican organizations; and within and between the borders of nations states. He argues that leadership is a social construction that is manifested in ways unique to particular organizational cultural contexts, while also examining how social actors in Jamaica, a previous European colony, as well as in the Caribbean Diaspora, both resist and accommodate the institutional, cultural, and political relics of Colonialism. His research focuses on using post-colonial theoretic approaches to analyze broader issues of media, theater, cultural performance, and cultural resistance in the Caribbean. He examines the construct of performance as a frame for interrogating the complexities associated with the negotiation of race and national cultural identity.

Among his publications, Dr. Hall is co-editor of the book Re-Constructing Place and Space: Media, Power, and Identity in the Constitution of a Caribbean Diaspora, which won a Best Book Award in 2012, and co-author of the book, Embodying the Postcolonial Life, which was published in 2004. He has written and presented several papers for professional academic conferences, and he has also written several book chapters and scholarly essays for academic journals as varied as Howard Journal of Communications and Management Communication Quarterly (a publication for which he is a member of the editorial board).

Dr. Hall has been involved in theater and performance in Jamaica and The United States and has written, directed, and acted in several plays, most of which were experimental or original works. Dr. Hall recently co-wrote a scholarly essay on Jamaican theater as a force for decolonization based on extensive ethnographic research conducted with his colleague Dr. Heidi Rose at Villanova University.

Dr. Hall has worked as a consultant over the past 20 years, specializing in facilitating strategic planning sessions for non-profit organizations; diversity training and strategic diversity management; conflict management; team building; cross-cultural communication; public communication and management/leadership training: helping leaders understand how to communicate with their public while managing organizational change. Dr. Hall has also worked for several years as a facilitator, leading dialogues between groups in conflict on difficult issues related to social identity (such as race and class) and teaching communities how to have difficult conversations across the lines of difference.

Dr. Hall has won awards for both the teaching and mentorship of students.