Class of 2017 Hits the Ground Running

Bennington College celebrated the achievements and the future promise of the Class of 2017 at Commencement this year, with an inspiring and rousing sendoff by Cornell William Brooks, a leading civil rights activist and former head of the NAACP.

This year’s Commencement Speaker, Cornell W. Brooks, delivered a vivacious address to graduates and their families at the dinner on the evening of June 2.

“Now more than ever we need the support of millennials and people who are not afraid of leading today and conquering tomorrow," said Brooks, a civil rights lawyer, social justice advocate, fourth-generation ordained minister, and outgoing President and CEO of the NAACP. "We know from experience that movements to change our society have always had young people in the forefront. The generation of today must determine its purpose and in doing so, determine the future of our nation. It is my deepest belief that the students of Bennington College have not only prepared themselves for leadership but have chosen to embrace a path of resistance necessary to change our nation for the better."

Kat Jagai '17 was this year's Class Speaker, and Liz White was the faculty speaker. You can watch all the speeches; enjoy Commencement photos, as well as see video of the conferring of degrees, here. 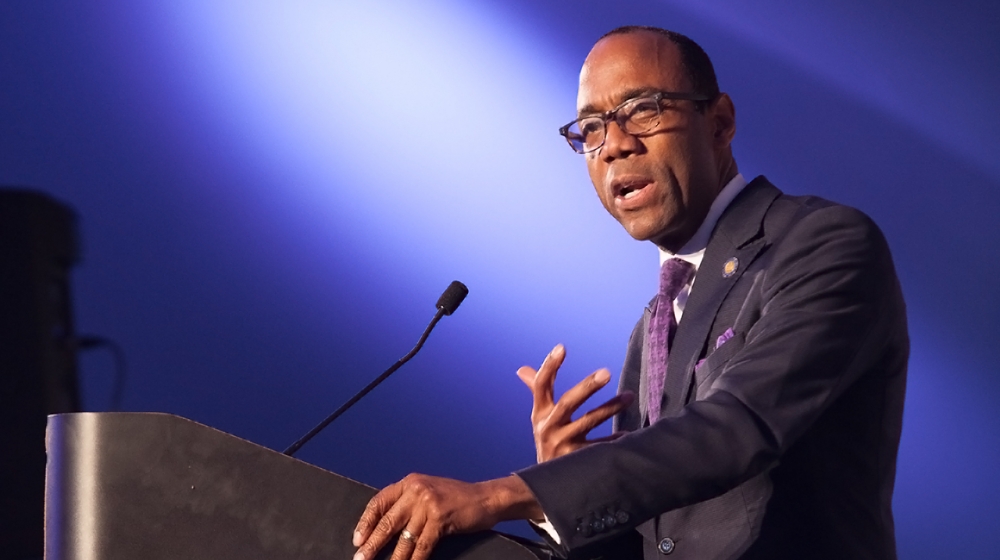 Bennington College is the only liberal arts school in the country that requires its students to complete an internship or other work experience that is integrated with their plan of study every single year. During Field Work Term in January and February, students fan out around the country and the world to test their acquired knowledge in the field. This year’s graduating class worked all over the US—25 states in all—and in 14 countries, including Bosnia and Herzegovina, Ecuador, El Salvador, Germany, Guatemala, India, Italy, Japan, Mexico, New Zealand, Panama, Spain, the US Virgin Islands, and Vietnam.

The Class of 2017 spent time at such places as some of the most vital arts organizations in the country (the Storefront for Art and Architecture, PBS, Signature Theatre Company, Smack Mellon, Mass MOCA, the Public Theatre), centers for scientific research (University of New Mexico, Fridley Lab at Syracuse University, the Metropolitan Hospital Center in New York), literary organizations and publishers (BOMB magazine, Knopf Doubleday, McSweeney’s Publishing, the Keene Sentinel) and public policy, advocacy, and development organizations (Theatre Without Borders, the Philadelphia Refugee Mental Health Collaborative, the Center for Civic Mediation in Los Angeles, Trust for Public Land, California Coalition for Women Prisoners and multiple NGOs in Asia and South America). Others worked alongside seasoned professionals (Christoff:Finio Architecture, the German novelist Benjamin Appel, dance icon Liz Lerman ’69, and others).

While a sizable number of students traveled the country and the globe to deepen their understanding of the issues that engaged them most urgently, many others worked locally. Over their four years at the College, graduating students have engaged with the town of Bennington and its surrounds in meaningful ways, through work with a range of sustainable food projects, environmental advocacy groups, the Berkshire County Head Start program, the Quantum Leap program at Bennington’s Mt. Anthony High School, the Vermont State House, and the State Legislature, and more.

Bennington students, it is often remarked, get a graduate style education at an undergraduate level—pursuing a line of inquiry shaped by their own driving interests, conceived in concert with faculty advisors who work closely with them, helping shape and guide their work.

As such, many achieve graduate style successes even before they graduate, including Anthony Shipman ’17, who co-chaired a panel at a national academic philosophy conference with faculty member Karen Gover on the topic of philosophy and dance.

These outsized achievements are no less due to the emphasis on hands-on, real-world problem solving in many of Bennington’s classrooms. The Bennington College team won the Best Student Team at the Vermont Hackathon Hack the Climate in 2015. Rohail Altaf '17 and Sarah Shames '17, along with their classmate Asad J. Malik ’19, created an app called Grow, which allows people within two miles to create a community cyber food market. Altaf and Malik went on to win another Vermont Hackathon honor the following year, when they were awarded a $3000 prize for creating an app that uses Artificial Intelligence (AI) to improve student engagement in online courses; this time around, they didn’t enter as a student team, competing with seasoned professionals instead.

Emma Maasch ’17, Emma Plotkin ’17, Geoffry Ballinger ’17, and Lauren Roshan ’17 took part in a six-week think tank at ASU and Stanford during the January 2017 Field Work Term with the goal of using art and design thinking to reimagine the future of arts and culture in America. The collaboration was conceived by Bennington College, ASU, and the Center for Cultural Innovation.

A number of graduating students took part in the Bennington College Museum Fellows program while students: a semester-long opportunity to live and work in New York City, embedded in cultural institutions while also doing intensive readings about museums and the mechanisms by which cultural value is assigned under the tutelage of Bennington College faculty.

Other members of the Class of 2017 found their way into the world of museums in different ways. Mitra Haque ’17 and Sarah Shames ’17 along with other students in the Art in the Public Realm class (see below) had their work shown at Bennington Museum, as part of an exhibition focused on advances in 3D digital design. Also on view in this exhibition was Chestnut, a 3D printed prototype created in the class-slash-start-up Future Studio; Rohail Altaf ’17 and Sarah Shames ’17 were part of the team.

As always, Bennington students were busy producing their own platforms and exhibitions, as well. Members of the Class of 2017 joined with faculty member Thom Loubet and a host of other students to launch B-rad, Bennington College’s 24-hour radio station. Sadie Heisler '17, Eloise Hess '17, Matthew Mahoney '17, Hans Olsen '17, Max Ostrow '17, and Janie Radler '17 all showed work in the student-curated Third Floor Show, which addressed the history and cultural import of Commons, long a center of creativity at the College and about to undergo an extensive renovation. Members of the Class of 2017 were among those who organized an exhibition at Usdan Gallery—”Black Spring”—on the history of black studies at Bennington College. And Katie Yee ’17 and Lily Houghton ’17 were among the students who launched the Literary Bennington website in 2015.

The World of Public Service

A Bennington education includes an emphasis on finding creative approaches to the most urgent problems that face their communities, ranging from the local to the global.

Over the course of their time here, the Class of 2017 has tackled issues like PFOA contamination in our region, forced migration, mass incarceration, the rights of undocumented immigrants, educational opportunities for the economically disadvantaged, hydroelectric power, food insecurity, and a host of other pressing problems, both inside and outside the classroom.

Mitra Haque ’17 and Sarah Shames ’17 worked with faculty members Jon Isherwood and Susan Sgorbati, as well as other classmates to design a sculpture for the new US embassy in Oslo, staking out a position related to the balance of environmental and economic imperatives relating to fossil fuel production, and the international tensions over claims to the Arctic territory, and other issues.

Dado Čobo ’17 was one of five Bennington students from Bosnia who explored the intersections between peacebuilding and theatre in their work with The Center for Peacebuilding in Sanski Most, Bosnia and Herzegovina.

Annika Kristiansen ’17 has been a regular contributor to the Sierra Club, writing on pressing environmental issues.

In the wake of revelations of the presence of PFOA in water in New York and Vermont, Bennington faculty and students sprung into action to study the problem. Thanks to a nearly $90,000 grant from the National Science Foundation, students—including those from the Class of 2017— took part in a new course that allowed the College to conduct original research on PFOA.

Among the graduating seniors who have won national award and fellowship competitions this year is Isaac Dwyer ’17, who received an award from Critical Language Scholarships (CLS) to study Urdu in Lucknow, India, this summer.

Thea Wong ’17, Katie Yee ’17, Willa Dorn Lilien ’17, Jacqui Alpine ’17, and Franci Revel ’17 have been awarded Undergraduate Writing Fellowships. The program allows a select group of undergraduate writers from Bennington the opportunity to further their study of craft with a 10-day residency at Bennington’s MFA in Writing program, one of the most prestigious non-residential graduate writing programs in the country.

A number of Bennington graduates are heading off to do further research and graduate work this year. Isabella Casey ’17, whose play The Nicosia Sisters was featured in Bennington Plays this year, will be joining the Iowa Writer’s Workshop in the poetry program. Franci Revel ’17 will join the MFA program for poetry at Cornell University.

Quynh Vo ’17 will be pursuing an MA in architecture at Cornell. Amelia Bois-Rioux ’17 will be at William James College’s Clinical Mental Health Counseling master’s program in the fall, studying Forensic & Correctional Counseling with her eye to future doctoral work.

Hoa Nguyen ’17 will begin a master's program in Learning, Education and Technology ay University of Oulu (Oulu, Finland), after taking part in a Bennington exchange program at Kansai Gaidai University in Osaka, Japan. He was awarded a full scholarship on the strength of his research proposal, which involves using social networks for language learning with a student-centered approach that promotes collaborative learning. Kyle Gordon ’17, who took part in the same exchange program, will take part in the JET Program (a Japanese government-sponsored program for foreign teachers meant to foster open and authentic cultural exchange between America and Japan), teaching in the Japanese city of Shizuoka.

Now entering its fourth year, the Kilpatrick Fellowship program welcomes new graduates beginning July 1 to work in the offices of Admissions, Buildings and Grounds, Communications, Office of the Provost and Dean, Institutional Advancement/Alumni Relations, and the President’s Office. Class of 2017 graduates Jacquelyn Alpine ’17, Olivia Judson ’17, and Susan Kennedy ’17 will be professionally mentored by members of the Bennington College’s senior administration in order to prepare them for a career in higher education and nonprofit management.

After a vote at the June meeting, it was announced that Nare Filiposyan '17 will be serving a 2-year term on the College’s Board of Trustees. Filiposyan's studies at the College focused on Architecture and Philosophy, and particularly on the questions of how the physical environment defines the kinds of activities performed in a space, who has access to those activities, and who does not. She participated in the College's Museum Fellows program while she was a student, and in her FWT at SHoP architects, worked on a prototype for the Talk Box for WNYC, New York City's flagship public radio station.

“We Confidently Recommend Them”

At the conferring of degrees on Saturday, June 3, President Silver read Bennington’s traditional commencement statement, which included the following passage: “We shall continue to follow these students with interest and affection as they take their roles in other communities, To those communities we confidently recommend them. At Bennington, we shall miss them."

Congratulations to the Class of 2017.