In a speech that tackled sexism, racism, organized religion, and the wisdom of condescending turtles, Gloria Steinem shared what she called "10 pieces of advice" at Friday's commencement dinner for graduates and their families. 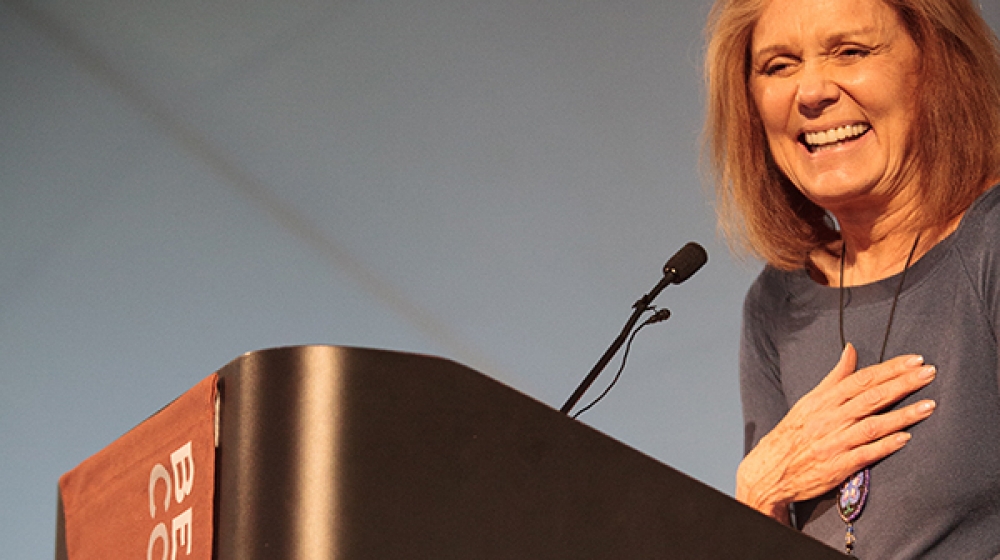 Steinem was preceded by senior Parke Haskell of Los Angeles, who demonstrated the skills she learned studying literature and theater through a speech that generated applause and laughter repeatedly.

Her fellow students cheered when she talked about the person in their lives they all knew who told them college was the best years of their lives.

“You’re like, ‘Are you actually condemning the rest of my time on Earth to an inevitable downward spiral?’” she said.

Haskell told the audience they shouldn’t be fooled by how presentable the graduating seniors appeared.

“Let me tell you, I know firsthand, there are no hotter messes that this class right here. This is a crazy pack of fools,” she said.

Haskell said what she will miss most about Bennington is the people.

“There’s just a special kind of person who thrives at Bennington,” she said. “It’s such a wonderful, special community.”

Haskell could be spotted easily at the graduation because of her bright pink hair, a look her parents adopted for the occasion. Her father, Steve Haskell, said because Parke had pink hair since she came to school, they “wanted to show our love and solidarity.”

“Really, this is about little more than showing her how much we love her,” he said.

Steinem started her speech by telling the audience with a laugh, “There’s no way that I can live up to your expectations.”

She said graduations were her favorite events because they were “more permanent than weddings” and “more diverse than most religious ceremonies.”

Steinem told the graduates that when she was preparing a speech for them, she remembered what was helpful to her was “completely unpredictable” and often not obviously helpful at the time.

For instance, she told a story about finding a turtle near a river during a field trip for a college course and deciding she should help by picking it up and taking it back to the river.

“I had just slipped it into the water and was watching it swim away when my professor came up behind me and said, ‘You know that turtle probably spent a month crawling out of that river to lay its eggs on the muddy embankment and you just put it back,’” Steinem said.

“I felt terrible. …Only in later years, when I became a traveling organizer, only then did I realize the lesson I had learned: Always ask the turtle,” she said.

Among the other pieces of advice Steinem offered were to treat yourself as well as you treat other people; never go someplace where they don’t allow you to laugh; you can’t live in the past or the future but only in the present; and religion is politics in the sky.

The feminist trailblazer said she hoped the last item on the list was a “hopeful” piece for the graduating seniors.

“If even one generation were born without ranking and without violence, without shaming, and raised without shaming or violence or ranking, we have no idea what might be possible for us on this fragile spaceship Earth that we love so much,” she said, “and you, graduates of 2015, are part of that future.”

Julia Wohlstetter of Seattle who took French and literature and Bennington, said she visited the college because she had friends who were Bennington students and said when she arrived, “it just felt right.”

“You look at a lot of places and you feel like you could go there but (at Bennington) it was just kind of a gut feeling, I guess,” she said.

“I don’t think I would have studied what I ended up studying anywhere else, so that feels pretty special,” she said.

Wohlstetter said after graduation she will teach English in France while Edwards said she hasn’t decided what she’ll do next but is contemplating a move to Providence and plans to keep painting.

Commencement weekend continued on Saturday with the conferring of degrees.