Fear and the courage to overcome it were the themes of the 79th Bennington commencement dinner. 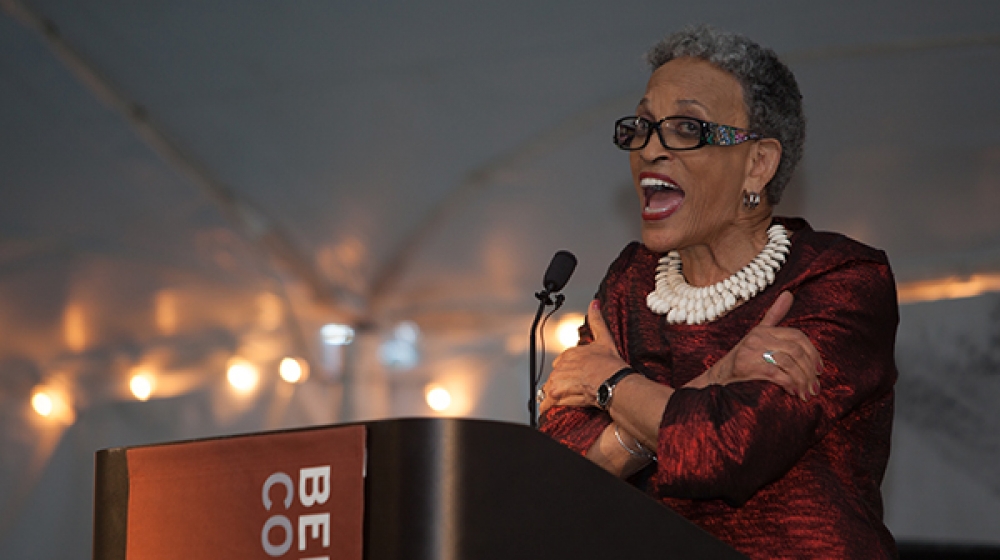 Dr. Johnnetta Cole, an anthropologist and director of the Smithsonian’s National Museum of African Art, spoke to graduates Friday night under a tent on the commons lawn.

She spoke about the type of courage she hoped they would show and referenced her friend and “shero,” author and poet Maya Angelou, who died Wednesday.

Cole, who was the first commencement speaker introduced by new college president Mariko Silver, told the audience she had been thinking about her friend while writing her speech because she wanted to focus on courage. Her friend insisted “it is the most important virtue; without it the rest have no chance,” Cole said.

She planned to call her friend the next day, but it was too late. That’s when Cole revealed to the audience that she was speaking of Angelou.

During her speech, often interrupted by cheers and applause, Cole said she wanted students to show courage in four areas: following their dreams, changing the path they are on if it becomes necessary, speaking out against injustice and “what is not right, not decent, not fair,” and devoting themselves to the service of others.

Courage was also a theme for student speaker Maria Jacobson, who spoke about how her college experience gave her the courage to overcome her fears.

She talked of her fondness for her directing class, even though she was often “terrified, full of doubt and uncertainty.”

“It was in this room and at this table that I witnessed the support and shared growth that is so inherent to a group of Bennington students,” she said.

Carlos Torres of Ecuador said he came to Bennington to study architecture. He will stay at the school under a new fellowship, working with the school’s buildings and grounds department.

Before he came, Torres said he had heard Bennington was a special college.

“What really piqued my interest … was there was a general sense that kids here were allowed to be empowered,” he said.

“When I was applying to other schools, I felt like I was deciding where to go to be told what to do for four or five years,” Torres said. “Bennington was the only place where they would ask me, not necessarily, what I want to study or where I see myself in 10 years, but instead what are you interested in and why.”

Jessica Joho of Philadelphia, a literature student, said her studies brought her to her “biggest love,” video games. She will go to New York City to be an editorial intern at Kill Screen, a magazine about video games.

“(Bennington College) gave me a resourcefulness I wouldn’t have gotten anywhere else,” she said. “Nowhere else could have ever made me so small and yet at the center of the world.”

Forest Purnell of Des Moines, Iowa, who was awarded a Fulbright grant this year, will study culture in China. He said he’s not sure he will have to miss anything about being a Bennington student.

“I feel in a lot of ways that I am still a student because it’s a process,” Purnell said. “I think Bennington starts a process where you’re always kind of questioning and always moving forward and finding the resources you need.”

While the commencement dinner was held Friday, Bennington College handed out diplomas to the graduates Saturday.