Laughing in the Face of Fear

Though Facebook helps old friends keep up to date with each other’s lives, Hyla Matthews ’91 can attest that nothing compares to the joy of reconnecting in person. 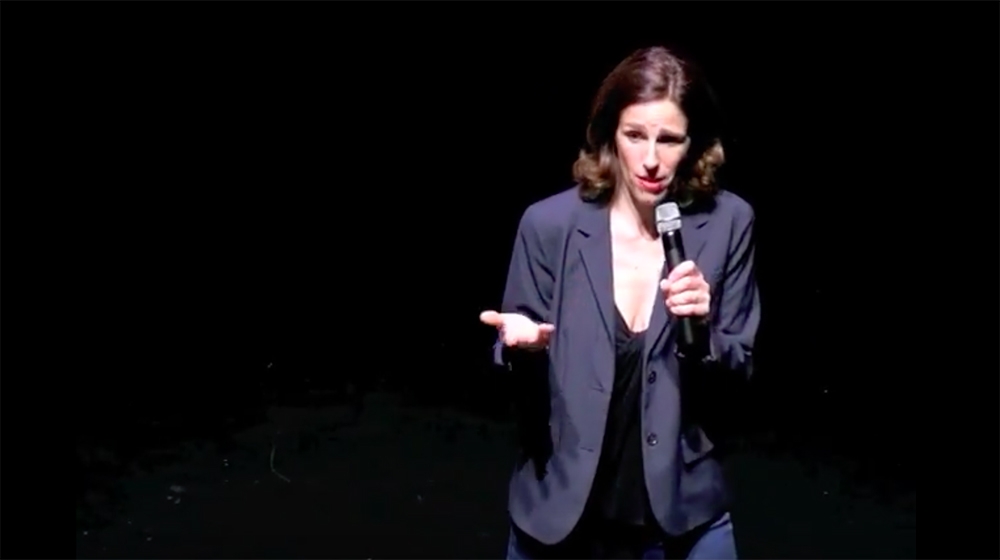 The Washington D.C.-based actress recently performed her stand-up comedy show You Are Here in a series of two-night engagements at The Slipper Room in New York City, founded by James Habacker ’94, and Hudson Backstage Theatre in Los Angeles.

“I saw people from Bennington at those shows who I hadn’t seen in 20 years, and it was so heartening to see them, to catch up with them,” said Matthews.

Contributing to her community has been central to Matthews’s work on You Are Here, which takes a humorous look at her four-year journey with breast cancer that metastasized to her brain.

You Are Here came about as a way for me to talk about what had happened to me.

While living in Los Angeles, Matthews trained in improv at The Groundlings, and she later found stand-up comedy as a way to storytell while performing her own material in between auditions and roles.

Matthews originally developed You Are Here for a 2017 benefit performance for the Triple Negative Breast Cancer Foundation. Many of the responses she received, said Matthews, were from other survivors who told her, “This has helped.”

Humor in the face of a life-altering disease may seem like a strange reaction, but comedy, said Matthews, can be a way to cope with “the un-cope-able.”

“When I got diagnosed, one of my first thoughts was, ‘Oh, great, now I have to do that f—ing run,’” said Matthews. “People have been making jokes about cancer and talking about it for so long, so I’m not doing anything new, but when it happens to you, it takes over your life. You do continue, hopefully, to live, but it takes a lot to process the experience.”

Following the success of You Are Here’s two-city engagement, Matthews is searching for the next way to use her show, her talent, and her story to help the cancer community.

“I’ve had a few friends, unfortunately, call and tell me that they’ve just gotten diagnosed, and they don’t know what to do,” said Matthews. “I'm trying to offer a hand and say, ‘Hold on, and try to live your life and do what’s right in front of you.’”

The material in You Are Here is relatable for many cancer survivors who are trying to cope with their illness while also moving their lives forward.

“Many people are moms who are dealing with this crazy life of, ‘Gotta go get chemo, my hair is falling out,’ while also having husbands and trying to forward their careers,” said Matthews.

Matthews came to Bennington from a small high school in Pennsylvania and found the College’s similar size comfortable.

“There wasn’t a lot of emphasis in my family on going to college and nobody really pushed me toward it,” said Matthews. “Bennington appealed to me because it was small, and I loved the focus on the arts. My father is a painter, my mom is an actress, and my three brothers are musicians, so I wanted to replicate that creative environment.”

Soon into her time at Bennington, Matthews became quick friends with Jonathan Marc Sherman ’90 when the two were cast in a production of The Rocky Horror Show. After her first year, however, her college experience was put on hold when her mother was diagnosed with breast cancer.

“We didn’t know what to do, and I said, ‘If you’d like, I can stay home to be with you,’ and she said, ‘Okay!’” said Matthews. “And I was like, ‘Oh my god!’ I meant it, but I didn’t expect she’d take me up on it. But I took a year off and stayed with her. I got a wonderful job and life experience under my belt.”

Upon returning to Bennington the following year, Matthews met peers whom she considers, even today, among her close friends.

“I found my core people among Maria Rosenblum ’91, Peter Dinklage ’91, Ian Bell ’91, and Brooks Ashmanskas ’91, and those friendships are invaluable,” said Matthews. “You can’t find friends like the ones you make in college anywhere else. You’re in the same boat together, and you may have no idea what you’re doing, but you’re hanging onto each other.”

While Matthews focused on studying drama throughout college, she loved being surrounded by other artists and invited to engage in various creative fields.

“I loved the facilities at Bennington,” said Matthews. “VAPA is such an incredible building. I don’t know anywhere else that has what Bennington has, that building where you can go in at 1:00 or 2:00 am and do a dance piece or work on your sculpture or ceramics, and know that other people are up and working on stuff.”

The curiosity and exploration that Bennington nurtures, she said, allows ample room for students to discover new interests and paths.

“Bennington was unusual in that there was a lot of room to figure out what you wanted to do,” said Matthews. “I knew I wanted to study acting, but it was nice to dip my toe into a lot of different things and see, ‘Oh my gosh, I love the cello! I didn’t know that.’”

Long after graduation, her experience at Bennington remains relevant and influential.

“There are so many Bennington people in New York and Los Angeles, and everybody stays connected,” said Matthews. “When I was looking for a place to do my show, I emailed Jonathan [Marc Sherman] and he had lots of good suggestions, like the Slipper Room.”

Matthews reflected on the support she had received from friends both during college and in her career beyond.

“The Bennington net is so incredibly wide,” she said. “Especially during this last year, I have appreciated the network of people. James [Habacker] was such a pleasure to work with. And Bennington people who never knew me came out to support me at the LA shows. I loved that.”