Researching the Microclimates at Forest Edges: Senior Work in Ecology

For Bennington College student William Shepard ‘21, the forest is a limitless source of fascination and information. 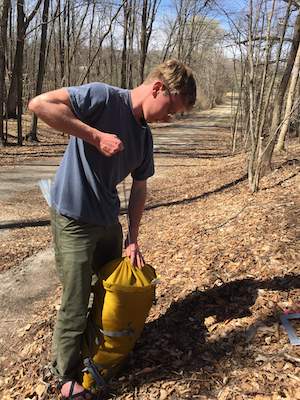 His undergraduate experience will culminate this spring with a senior project in Ecology focusing on the impact of spatial factors and seasonal change on the temperature structures of forest edges.

“In ecology, there are no boundaries. Everything interacts with each other... and forest edges are often hotspots of activity and tend to be more biodiverse than forests themselves. We can’t begin to fully explain how organisms will respond to changes along these edges until we first understand what sorts of changes are happening and why,” said Will.

On a Saturday morning, he ventures out to do field research in The Mile-Around Woods in North Bennington where he collects a hundred and thirty litter samples at the periphery of the forest. With a cardboard quadrat frame in hand, Will closely inspects the trees that have been marked with blue tape and iButtons, data logging devices that have been recording the temperature around the trees for the past three weeks. After sealing the leaves and twigs in a plastic ziplock bag, he diligently calculates the canopy cover by holding a hemispherical mirror densiometer to the sky. With precision and attentiveness, he devises an elaborate numbering system to categorize the hundred and thirty litter samples in his backpack. The litter samples will be later dried in an oven, which will allow him to calculate the moisture content of the different samples.

Will is particularly focussed on the relationship between microclimates and habitat fragmentation. Microclimate refers to a local set of atmospheric conditions — humidity, precipitation, wind, temperature — that differ from those in the surrounding area, sometimes dramatically. As weather conditions have begun to shift due to climate change, microclimates provide refuge for species in larger areas of unsuitable habitat. As it turns out, emerging research on this topic has found that many species will be faring better than what was previously predicted largely because of an abundance of suitable microclimates.

Will initially intended to pursue acting in the theater department at Bennington, but during his first year, he dabbled in a range of disciplines to gain exposure to the “true liberal arts experience” promised during his admission. He studied Philosophies of the Good Life with Karen Gover and Paul Voice, Fundamentals of Music Composition with John Kirk, and the History of Medicine with Carol Pal. Yet, it was in Kerry Wood’s class on Plant Diversity and Ecology where Will gleaned the foundations of plant morphology, plant diversity, and evolution.

“I was interested in anything to do with the environment, both science and non-science, and in Kerry’s class you also got an opportunity to go off-campus to study in the field,” he said.

Before coming to Bennington, Will had spent a gap year in Chile through the National Outdoor Leadership School (NOLS), where he explored the temperate rainforests and alpine ecosystems of Chilean Patagonia while studying Spanish. In the summer, he worked as a sea kayaking instructor and a glacier guide in the Prince William Sound of Alaska. His interest in Ecology precedes his formal training in the discipline; it is as experiential as it is scientific, equipping him with a range of skills in outdoor education, adventure tourism, and field and laboratory research.

Will prepared himself for his senior project by completing an independent study under Kerry Woods’s supervision during the summer to familiarize himself with the literature surrounding microclimates, invasive species, climate change, and habitat fragmentation. He was surprised to notice that both ecologists and biologists have not moved past the idea that summer is the only important biological season, which further compelled him to consider the effect of seasonal change on microclimates. While time constraints during a fourteen week term may limit students from conducting in-depth scientific research, the opportunity to complete a senior work in the sciences allows students to design a project proposal and undertake hands-on field research in their last year. Despite having a niche research interest, Will has found institutional support amongst the science faculty at Bennington to conduct independent research.

While greeting passerbys in The Mile-Around Woods, Will spots tiny, white Carolina Spring Beauties budding under the trees. It is, perhaps, Will’s passion for preserving species like these from the onslaught of climate change that motivates his research as an Ecology student at Bennington.