Situated between two other major cultural hubs—the Berkshires and New York’s Capital Region—Bennington has often been defined by its neighboring draws and less often by its own creative pull. In 2017 that changed when the National Center for the Arts ranked Bennington the third most vibrant arts community in the U.S. for its size.

Bennington’s artistic vitality owes considerably to the way area arts organizations share objects from their respective collections, synchronize shows, and think about how their programming can complement one another’s. Then, there’s the symbiotic relationship these organizations have with the College.

When you pair College faculty and student artists, the start and stop of these collaborations between institutions can be difficult to distinguish. Members of the College community curate for, perform, exhibit, volunteer, and intern with nearly all of the cultural organizations in the area. The history of specific College-institutional collaborations would fill several volumes. Underlying all of them is a common vision of the vital role the arts play in the community.

Anne Thompson, inaugural director and curator of Bennington College’s Suzanne Lumberg Usdan Gallery, came to Bennington drawn to the local/campus permeability. She sees her role as curator inside and outside of the Usdan Gallery—one that will build on the myriad of developing partnerships with arts organizations locally, regionally, and globally.

“Bennington has a rich history and stunning landscape,” Thompson says. “I’m talking with a lot of people, looking at campus, looking at the region, seeing what opportunities there are to work in a context-specific way here in Vermont. The College’s history of innovation lends itself really well to thinking in an experimental way about how art gets exhibited on and off campus and in collaboration with institutions in the region and around the country,” she says.

While the area is saturated with a growing art scene, here are some of the current cultural exchanges between arts organizations and the Bennington College community.

MASS MoCA is the nation’s largest contemporary art museum and one of the most influential—“a site for all eyes,” raves The New York Times, a “mecca,” according to the Boston Globe. MASS MoCA’s expansive 16-acre, 28-building former factory complex is infinitely flexible, as ideal for idiosyncratic shows and the priorities of the moment as it is for grand retrospectives and monumental art installations. Because the MASS MoCA campus is home to numerous fabrication and rehearsal residencies, it is also among the most productive art-making sites in the country.

“Bennington and MASS MoCA have a shared set of values that guide our respective missions,” says Paige Bartels, Bennington’s senior vice president for strategic partnerships, “as Bennington leads in higher education, MASS MoCA leads in the cultural sector, continually experimenting and pushing the envelope of what it means to present art (and performance). We also have a shared desire to collapse the divides between the region’s small towns—when we do, we collectively  have an enormous impact on the cultural landscape of the area.”

The connections between the two institutions are many: Bennington faculty regularly show at MASS MoCA, students work during FWT in a range of museum departments, and President Mariko Silver serves on the museum’s Board of Trustees. MASS MoCA featured a solo photography exhibition of faculty member Liz Deschenes in 2016 and faculty member Mary Lum’s recent monumental mural “Lorem Ipsum,” was created specifically for Building 6. In May 2017, the Museum’s massive Building 6 opened to the public with galleries devoted to works by, among others, James Turrell, Laurie Anderson, Robert Rauschenberg, and former beloved Bennington faculty member and musicologist Gunnar Schonbeck. The Schonbeck Gallery is singular evidence of what likeminded institutions can accomplish together.

In 2011, music faculty member Nick Brooke captivated Bang on a Can All-Stars performer Mark Stewart by showing him Schonbeck’s experimental, often oversized instruments made of found objects, which Schonbeck and his students fabricated by hand over the decades he taught at Bennington.The two worked with the Schonbeck family, as well as with Sue Killam, the museum’s managing director of performing arts and MASS MoCA director Joe Thompson to transfer the collection from Schonbeck’s former “instrumentarium” on the College’s Commons building to MASS MoCA, where Stewart guided local luthiers and students, including museum intern Webb Crawford ’18, who worked over several summers and FWTs, in restoring them. Over the last several years, musicians visiting MASS MoCA, including Wilco, incorporated Schonbeck’s instruments in their performances and projects. Now installed in a dedicated gallery in Building 6, the instruments
in the Schonbeck Gallery are available for visitors to experience first-hand Schonbeck’s distinctive approach to music-making.

Bartels notes that the College’s connection to MASS MoCA is a prime example of the way Bennington is
approaching institutional partnerships. “We’re committed to building collaborations that go beyond Field Work Term students and relationships our faculty have with MASS MoCA; we’re looking to work collectively to advance and strengthen the artistic communities we’re in, advancing and extending our missions as we do.” 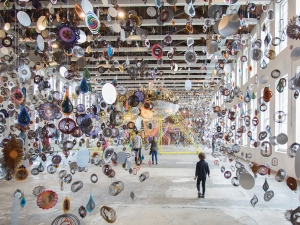 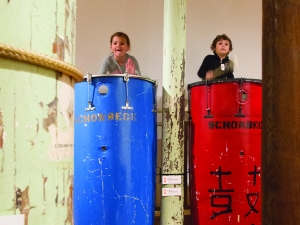 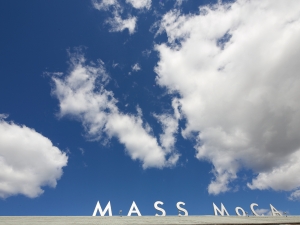 With several exhibition spaces in the community, and a concert venue in the downtown Masonic Hall, the VAE is a kind of proving ground for College student artists and musicians where they can present to a wider audience and be part of shows that occasionally feature knockout talent, says VAE founder Matthew Perry.

Faculty member Thorsten Dennerline sees the pedagogical value of this. His advanced printmaking students have presented work in an annual show hosted by the VAE over the last ten years. “It’s about students’ engagement not only with their own work but with the work of their peers and a broader audience than what they might encounter in an academic setting,” he says.

In addition to the many formal collaborations the VAE has with the College, the organization’s basement music series showcases national and international musicians and regularly features Bennington students, alumni, staff, and faculty musicians.

Perry feels that the communities of Bennington and North Bennington have helped incubate and foster the VAE’s mission. “We’ve been nurtured by people like (visiting artist and former Bennington board member) Ken Noland and (former faculty member and writer) Jamaica Kincaid and people who have been in and out of the College who’ve laid the groundwork,” he says. “Their spirit is here.”

Founding artistic director Eric Peterson started Oldcastle as a touring theater out of New York City and decided to bring the theatre to Bennington’s Main Street during Oldcastle’s 45th season.

Peterson, a Bennington native, was inspired by the area’s wealth of artistic influences and wanted to continue that legacy. “Bennington is so connected to the arts and I want to be able to pass that on to future generations,” Peterson says. “To know that Shirley Jackson, and [former Bennington College faculty members] Nick Delbanco, John Gardner, and Jules Olitski, and on and on have lived and worked here is remarkable.”

Oldcastle brings in actors from New York and also works with many local actors (including staff member, Meredith Meurs), writers, designers, and directors to program a full 52-week year. The Theatre spent two summers at VAPA’s Lester Martin Theater, with the College and the Theatre having mounted several joint productions, including George Bernard Shaw’s The Devil’s Disciple. Currently, the Oldcastle is staging numerous faculty and student music concerts.

Music director Michael Finckel trained at the Oberlin College Conservatory of Music and Bennington College—where he studied with former Bennington College faculty member and Sage’s founder Louis Calabro. Finckel is interested in tackling unique, “large-scale works that community orchestras in the outlying areas are not equipped to take on.” Finckel’s vision for the orchestra tends to make it primely suited for Bennington collaborations.

The College’s music faculty members frequently solo with and compose for the Symphony. Currently, faculty member Nick Brooke is teaching an orchestration class in which students write pieces they will audition for Sage to perform—something other faculty and students have also done in years past.

Dorset Festival, now in its 40th year, mounts four main stage productions a year from June to September, drawing some of the country’s most talented playwrights, actors, and directors. Under the leadership of artistic director and Bennington faculty member Dina Janis, the Festival has become known for bold and innovative programming and for its commitment to new play development, something the Boston Globe recognized in a glowing feature of the Festival that ran this summer.

Janis, who hosted several summer play-development intensives at the College for New York’s prestigious LAByrinth Theatre Company, has applied her gift for nurturing the most promising voices in contemporary theater to Dorset’s New Play Development Program in collaboration with playwright Theresa Rebeck and The Lark Play Development Center. Drawing on the vast talent pool of Bennington students and alums, as well as her own stage partnerships, Janis has built a festival in Dorset that attracts not only local residents, but an expanding and discerning audience seeking groundbreaking theater.

In addition to bringing audiences to the mountains, Janis is also bringing in headlining talent. Dorset performers have included Tim Daly ’79, as well as a long roster of well-known actors such as Tyne Daly, Kristine Nielsen, and Alfre Woodard. Artists come to Dorset partly because of the challenging material it stages, and partly because it frequently offers actors the chance to originate a role in a show’s world or regional premiere. This past summer, faculty member Kirk Jackson opened the season with The Tarnation of Russell Colvin.

DTF can seem, sometimes, like a second Bennington campus with its many connections from the formal Dorset’s Young Playwrights Program, which pairs advanced Bennington College student playwrights with local middle- and high-school students to the healthy population of faculty artists and students working at the Festival and participating in the annual apprentice program. 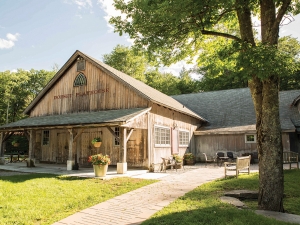 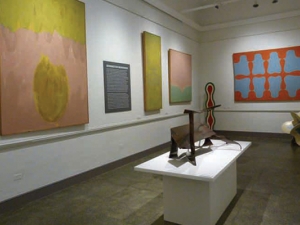 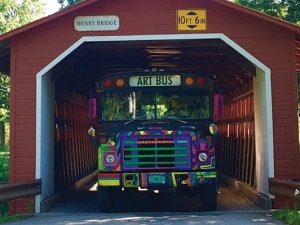