This winter, a group of Bennington collaborators led by Asad J. Malik ’19 of 1RIC Studio are headed to Sundance Film Festival New Frontiers with a pioneering project poised to test the waters of a new storytelling medium. Their project is also the only New Frontiers submission helmed by undergraduates. 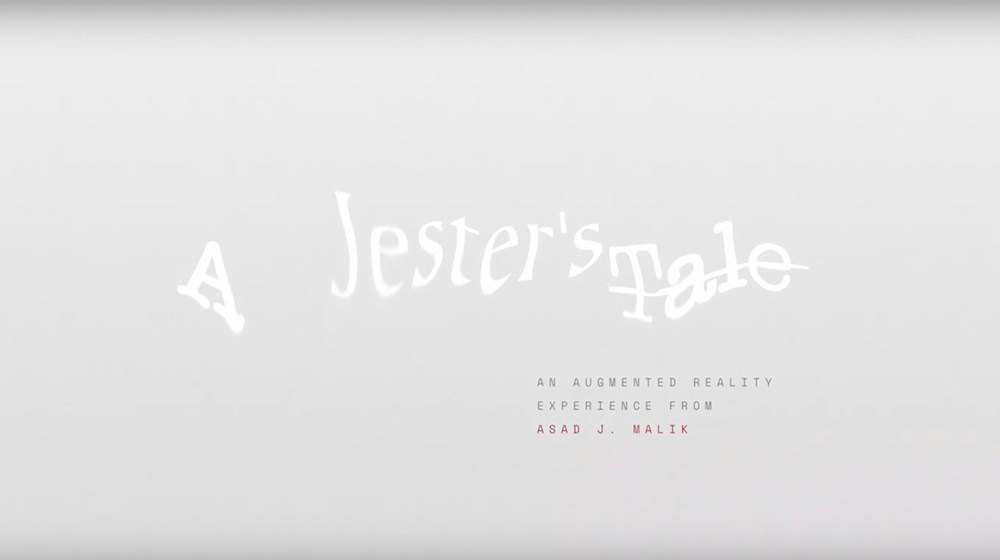 A Jester’s Tale, an Augmented Reality (AR) experience, invites viewers into a child’s bedroom for a nightmarish fairytale. While its creators are tight-lipped about the twists and turns contained within the twelve-minute experience, they are clear that the project itself is among the first of its kind.

Indeed, the creation of A Jester’s Tale may signal a new era of AR storytelling, expanding the medium’s use beyond games like Pokémon GO to provide full, immersive fictional narratives.

“I want people to see this as the moment when they realize that AR is the new way to tell stories,” said Malik. “You will see characters who live in space with you and who engage or change that space. It’s going to be more than just short pieces of content.”

Sundance will be the premiere of A Jester’s Tale, and the experience will operate on a gadget called Magic Leap One. Though Magic Leap will have their own content at Sundance, 1RIC is the only third-party production company that will also be showing work using that device.

“Working with this brand-new, cutting-edge technology has been interesting because it is uncharted territory,” said Sound Designer and Programmer Jack Daniel Gerrard ’18. “When we encounter problems, there is no precedent to rely upon, so we are simultaneously making the project and creating the infrastructure it’s built upon.”

Malik has been working with AR for the past three years, exploring the medium’s intersection of art and technology through projects like Terminal 3, which premiered in this year’s Tribeca Film Festival Storyscapes lineup.

“I anticipated that a lot of Terminal 3’s elements of context and presence would be effective, but the project’s success enabled us to see how much of an effect they had on people,” said Malik. “With A Jester’s Tale, we wanted to take the next step to see how far we could go, taking AR from a nonfiction to a fiction setting. We formed a bigger team, raised more money, and came up with this relatively elaborate project.”

Many of Malik’s Terminal 3 collaborators, including Gerrard, Casting Director Viva Wittman ’18, and Lead Writer Philipp Schaeffer, have returned for A Jester’s Tale.

“Since we have all been working together for over a year, the scope of what we are able take on is much greater,” said Gerrard. “Even as we experiment with new technologies, we have been able to hone our workflow this time around.”

“Asad creates a collaborative environment,” said Phoebe VanDusen ’19, who contributes voice acting to A Jester’s Tale. “It’s rare to have a professional project that’s helmed by all young people, and it’s empowering to feel like you can give insight and have your voice matter in the discussion.”

The variety of backgrounds and disciplines represented on the team, said VanDusen, contributes to the project’s strength.

“We have a lot of different voices in the room, and Asad values all of them,” said VanDusen.

A Jester’s Tale is also an experiment to discover what types of stories can best be expressed through AR.

“There’s something very Bennington about the piece in terms of bringing a lot of fields in conversation with one another,” said Mariana Irazu ’19, who serves as the in-house producer for 1RIC. “There are a lot of art forms utilized in A Jester’s Tale, from visual storytelling to the oral tradition of bedtime stories.”

Irazu also acknowledges that the differences between AR and film can be difficult for those who haven’t experienced AR to grasp.

“Imagine if I take a video of a book flipping pages,” said Irazu. “The fact that you see the pages on a screen doesn’t make them more interesting than if you had the book in your hand. New mediums, when they are doing the exact same thing as their precursors, aren’t exciting. But AR, when used correctly, offers a perspective that becomes interesting in intimate ways.”

“An AR experience is entirely immersive,” said VanDusen. “Whereas we watch films with empathy, but we do so passively. As a voice actor, tonality affects every emotion to either draw viewers further in or push them away. So the challenge for AR is to make sure the viewer can feel connected and immersed.”

“Simulation is advertised as the ‘ultimate medium,’ the end of new mediums, because it can encompass everything. I think that rings true in many ways,” said Malik. “AR is interesting because it combines that limitless palette with the limitations of physical reality.”

The marriage between potential limitlessness of the form and artistically shaped content can together make AR a powerful storytelling platform.

The viewer’s active role within an AR experience is a key difference from film and one that Malik and his team consider seriously. While some companies enjoy the autonomy viewers can exercise within these experiences, Malik is equally as interested in the agency created characters retain within their worlds.

“If viewers have control over characters, then that destroys any power the character has in the space to do things to inform you and tell you a story,” said Malik. “Agency is a big question in immersive mediums: to what extent do you give agency to the viewer? In our work, we try to allow a viewer agency in situations while granting the artist agency on a macro level, so we maintain a narrative arc while still making viewers feel responsible for it.”

Since AR is a newer medium, its innovators are still working to perfect the form’s distinct perspective.

“We often say that we’re inventing how AR becomes experience, because there haven’t been many before,” said Irazu. “So any position we take sets a precedent and establishes a pattern, which is an exciting thing to be doing your senior year of college!”