A Bennington Theoretical Physicist in the Making

As a theoretical physics student, Swagata Datta ’23 walks a path that few venture at Bennington. After completing his second undergraduate research project, Datta reflected upon his Bennington education and Field Work Term experiences, which informed his research interests and plan for continued education.

Swagata Datta ’23 is a senior studying Mathematics and Physics with a theoretical focus.

“When I came to Bennington, I wanted to study physics and math. My interests have not changed; however, my maturity and understanding of these topics have significantly expanded,” said Datta. “The math I studied in high school was very different from what I study now. Before coming to Bennington, I had no idea pure mathematics existed!”

In contrast to high school math, which is often calculation and equation-solving centric, pure mathematics is the abstract study of mathematical concepts, independent of any external application. When faculty member Andrew McIntyre introduced Datta to the discipline, the self-described “math geek” was immediately intrigued.

“I enjoy the rigorous aspect of pure math, so for a while I was considering going to graduate school for Mathematical Physics over Theoretical Physics,” explained Datta. “Mathematical physicists are more concerned with understanding math rigorously than theoretical physicists do, which seems to be more in line with my interest in pure math. The application of theoretical physics, however, provides a more prominent connection to the world. I find this connection too attractive to miss!”

Datta eventually decided to apply for theoretical physics graduate programs after Bennington; nevertheless, his Plan and studies ended up including more math than he first considered. In his Advance Work, Datta hopes to explore the connection between mathematics and physics in quantum mechanics and apply these concepts to understand fundamental particles.

During Summer 2021, Datta joined Emory University’s Laney Graduate School SOAR (Summer Opportunity for Academic Research), a 10-week research program for undergraduates. Unlike many other programs where students assist in research projects that professors have already planned, Datta had the opportunity to investigate a topic of his own choosing.

“The direction I chose was informed by a research paper on soft matter physics. The authors were studying the arrangement of particles with very specific triangular shapes, and they demonstrated with Python simulation that six of these particles can fit together to form a hexagon,” said Datta. “The peculiar shape also piqued my interest, and in my study I look for empirical evidence to show how the shape drives how particles move and the arrangement they take.” 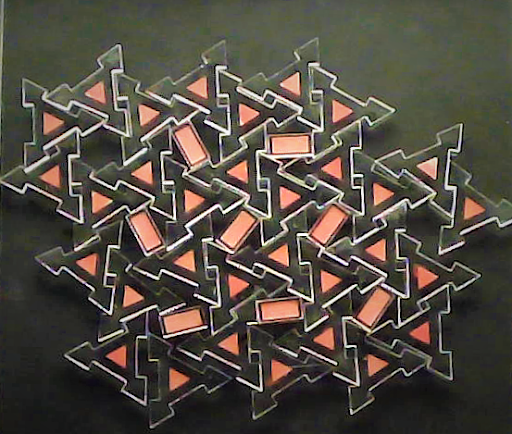 A macro-dimension model of the triangular-shaped particles Datta studied over the summer 2022. The notches allow the particles to interlock, which piqued the interest of many particle researchers.

“[The experience] was fun but didn’t seem like something I wanted to commit to in the long run,” remarked Datta. “I didn’t enjoy experimenting as much as I enjoy the theoretical part [of physics]. Besides, summer research programs, which last for 10-12 weeks, generally don’t provide a lot of time for you to both conduct experiments and finish data analysis. That’s why I switched up my research topics this summer.”

In 2022, Datta received a returning offer from his research mentor. This past summer, he committed to another project more suited to his strength and interests. Over two months, Datta studied the aging of colloidal gels in microgravity.

“Colloidal gels refer to mixtures of exceptionally small particles, known as colloids, in a liquid solvent. This form of gels make up commercial products such as shampoos or liquid soap,” said Datta. “Many research efforts have been made to understand the characteristics of colloidal gels and develop better formulas and additives for the gel. From then, researchers can improve product performance or prolong shelf life.”

“On Earth, gravity causes heavy components to settle and lighter ones to float. The sedimentation complicates the research process and makes it difficult for scientists to understand the movement of colloids,” explained Datta. “Under microgravity conditions, we can better observe the behavior of these colloidal gels and, in turn, understand how we can improve the products people use daily.”

Experiments on the colloidal gels were conducted on the International Space Station. Datta’s job entailed receiving data from the ISS and gathering valuable information regarding the movement of the particles.

“I worked with almost one terabyte of data. The data was basically videos of the particles from the experiments conducted in space,” said Datta. “I was looking into how [particles] behave over 60 hours, how they behave at different concentrations, and so on.”

To study the behavior of the gels, Datta utilized a technique called “particle tracking.” This rigorous technique requires the researcher to spend hundreds of hours studying each frame of the recording of the experiments. 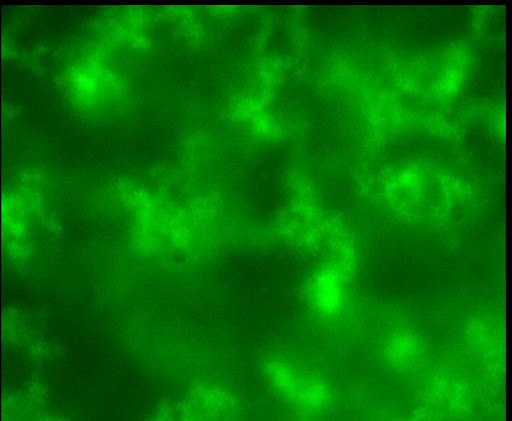 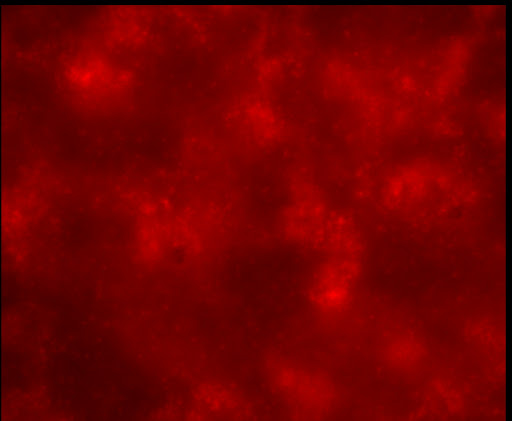 “In the data we have, the particles are recorded as blobs of light. We identify the particles in each frame of the video, label them, and track how they move across the frames,” explained Datta. “With this method, we can observe how the particles move over a long period of time. A few tasks I accomplished included calculating the average displacements of the particles, discovering how they settle with regard to neighboring particles, and determining if the particles clump together or behave more fluidly.” 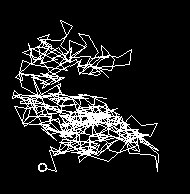 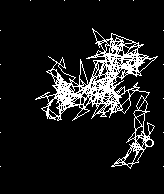 Some patterns of movement of colloid particles, mapped by Datta during particle tracking.

Datta is now working with his research mentor to prepare a paper to submit to an academic journal by 2023. This manuscript would set the first milestone to his career as an aspiring researcher in theoretical physics and the physical sciences. 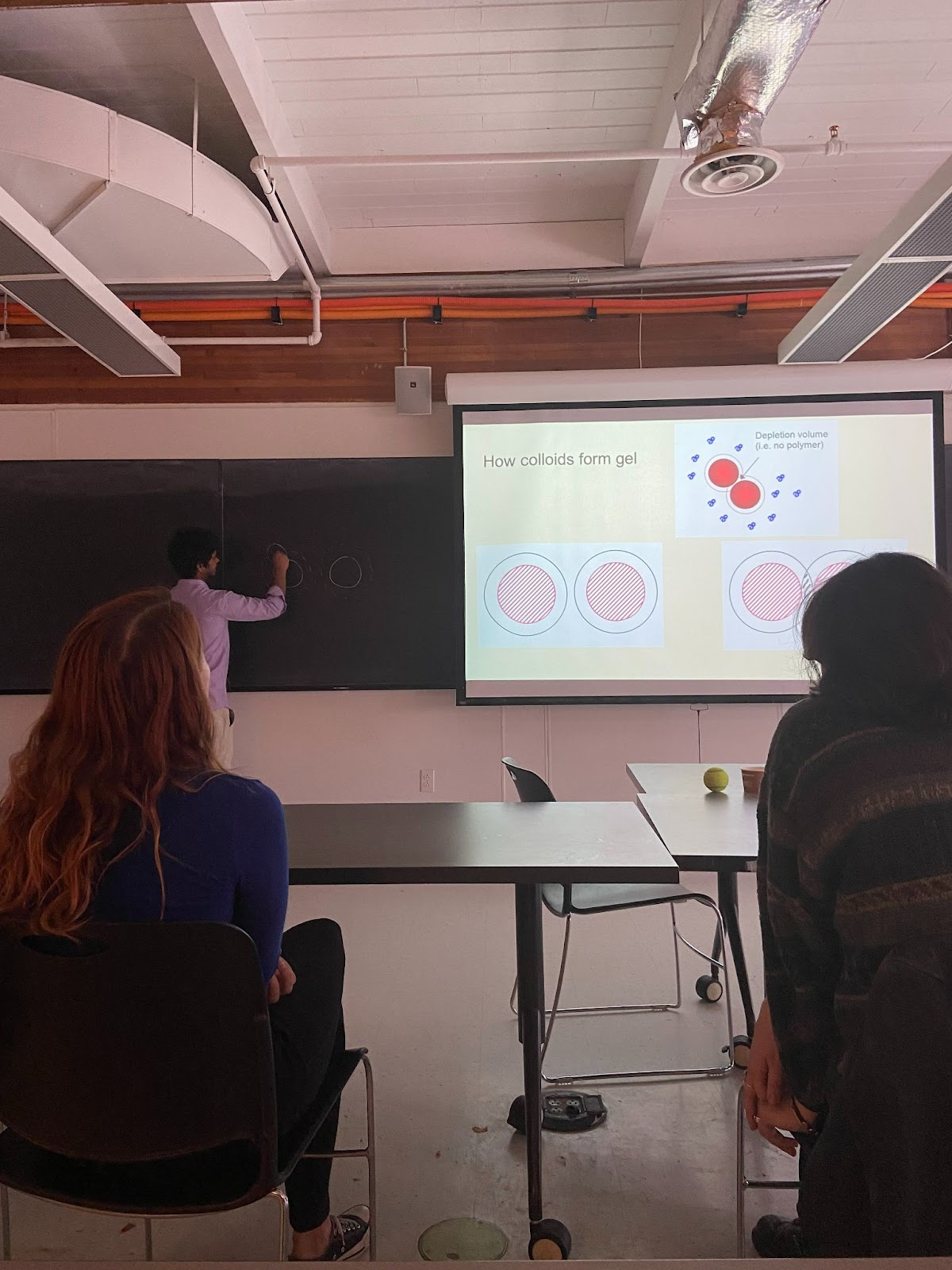 Datta sharing his summer research at the weekly Bennington Science Workshop held by the Science and Mathematics faculty.

Datta had a busy year ahead after he returned from his summer research experience. He is currently juggling developing his senior project, writing his research manuscript, and applying to graduate schools.

“While I don't see myself continuing the work in soft matter physics, the research experiences I gained over two summers is invaluable to my future career,” said Datta. “I learned how to ask questions, how to form informed hypotheses, and how to go about finding answers for my own inquiries.”

With the knowledge and passion he gained in the classroom and from two Field Work Term experiences, Datta is ready to reach for the stars.

“For graduate school, I am looking for a big department where I could have the leeway to explore other topics within theoretical physics. I might check out condensed matter, astrophysics, or cosmology, and choose from there,” said Datta.

“I still really like pure math. Thinking about abstract structures of math is always fun,” remarked Datta. “And I am ready to [think about abstract ideas in math] in the context of the universe.”