Following the earthquake in Nepal, Ujwal Thapa '00 rose to the occasion and now is rising in political popularity, by Crystal Barrick '11 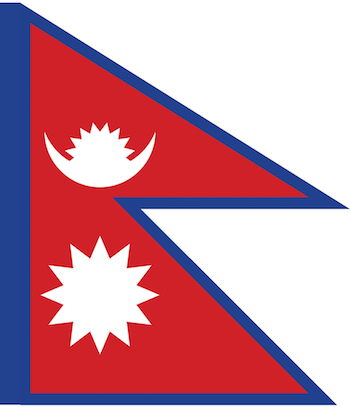 After a magnitude 7.8 earthquake hit Nepal, Sabina Shrestha ’09 emailed Bennington. “I am writing to tell you about a phenomenal Bennington alum,” she wrote, “who is working tirelessly here, since day one. His name is Ujwal Thapa [’00], also a Nepali. He has started his own political party, called Bibeksheel Nepali.”

“At this horrible time,” Shrestha continued, “all political parties were quiet the first five days, with leaders and politicians, including the cabinet ministers, going underground for their own safety. But not Ujwal.”

On April 25, when the first earthquake shook Nepal, Bibeksheel Nepali had something nearly every other organization lacked—a strategic disaster plan, with protocols and infrastructure already in place. Within 25 minutes of the quake, Thapa and a team of volunteers arrived at the closest hospital in Kathmandu. They transformed the garden into an “open sky” ICU. They began raising money for emergency medicine, food, and tarps. Hundreds of patients and volunteers flocked to their pop-up help desk, guided by Bibeksheel Nepali’s 24-hour hotline and social media accounts. “People saw that we were the only organized team out there that they could trust, that was actually doing something,” Thapa says. “Anywhere we found gaps in governance, that’s where we were working.”

This swift and practical approach has earned Thapa and his party respect at a time when cynicism and mistrust of government pervade. Bibeksheel Nepali grew out of a protest movement, teeming with young, educated, frustrated—yet optimistic—Nepalis. Their logo is a simple black-and-white happy face; their goal is “to build a peaceful and prosperous Nepal” in their lifetime. Since the April earthquake and a second in May, more than 1,500 volunteers have joined their relief efforts, inspired by the party’s unparalleled responsiveness and dedication, and its transparency about finances (they publish all expenses and donations online, in real time).

“Today the media is abuzz with criticism for all the political parties in Nepal,” Shrestha says. “There is widespread condemnation among the public, hatred and anger even. Ujwal’s Bibeksheel Nepali is the exception—his Facebook page ‘likes’ grow by the minute, help is pouring in from everywhere in Nepal, because everyone trusts him, they believe in him and look up to him.” The Nepali Times recently echoed this sentiment in a May 15 article with the headline: “Bibeksheel Nepali shows how it is done: A party of youthful citizens shows what it means to be committed to the country above self.”

Ujwal Thapa defines much of his work in terms of “provoking” Nepali citizens. He not only urges them to act in the face of disaster, to fill gaps left by the government, but also, “to be ‘bibeksheel’ in nature and bring positive changes within themselves.”

Bibeksheel is a hybrid word that loosely translates to “common sense and wisdom.” The political party in its name captures the span of Thapa’s influences, from America’s Thomas Paine to Nepal’s own Buddha. He says, “What we are trying to do is build politics as a very ethical and spiritual experience. It’s a deeply personal experience, and I think that is not taken favorably in the world today. Politics is seen as very cynical, very compromising.”

Bibeksheel Nepali encourages citizens to see politics as something with dignity, as something that can nourish the whole country, as well as each individual. And it balances this idealism with stark pragmatism—prosperity can only reach Nepal, according to the party, after an “entrepreneurial revolution.”

“It’s no use talking about democracy or ethics to someone who is hungry and has no food to eat,” explains Thapa. “We want to build citizens to be more entrepreneurial in nature, so that they have the capacity to take care of themselves.” Natural disasters expose Nepalis’ vulnerability—most citizens are very reliant on the government and government aid, and they are not getting what they need. “We believe it’s not the earthquake that killed people, it’s the politics,” says Thapa. “The sad reality about Nepal is that everyone knew there was a big earthquake coming, no one was actually preparing for it, especially not the government. Hundreds of millions of dollars were supposedly spent on disaster preparation. We actually realized after the earthquake that they hadn’t really done much.”

And so, as monsoon season approaches, and as Bibeksheel Nepali moves from relief work to rehabilitation and reconstruction, Thapa is looking ahead. For example, 600,000 houses were destroyed in the quake; to rebuild them, Bibeksheel Nepali is “trying to train people, the villagers, to build their own houses, to become builders so that they can get work and get paid for it,” says Thapa. “We want to make sure that people get back on their feet and start being more self-reliant.” At the same time, they are putting pressure on the existing government and advocating for better building policies so that, no matter who does the construction, “better houses are made, better schools are made, better hospitals are made, and there’s no corruption when that happens.”

Thapa has a long view of the party’s future, as well. In the last year Bibeksheel Nepali has launched the Leadership Building Academy, determined to create the next 100 statesmen and stateswomen in Nepal. He admits that this work is “a Herculean task,” and he acknowledges that it “might even span a few generations.” But he finds hope in the challenge. He aims to rehabilitate not only his own country, but the world beyond its borders in turn.

“I think there needs to be a place where leaders can be trained, not just to be managers, but to be ethical and practical leaders of their nations,” Thapa says. “Because of [Nepal’s] unique history, we might have the right attitude to build the kind of nation and leaders who will inspire the world in the coming ages. Because we do need politicians to be more like leaders of the world, rather than just politicians of what we expect right now.”

Learn more about Ujwal Thapa'00 and his work by emailing ujwal@leadnepal.com