Bennington Books Gift Guide for 2022 (and Beyond!)

Whether you’re looking for the perfect gift for a loved one or for yourself this holiday season (you deserve a ‘lil treat), we’ve rounded up a handy list of new and classic books written by the Bennington community to delight even the pickiest of readers.

For the Poetry Lover

and Writing Seminars faculty Craig Morgan Teicher, is a curated collection that, “calls us to witness Edson’s obsessions with the curious, the absurd, and the peculiar, and the ways in which they can haunt our daily lives. The prose poems in this collection mold our everyday into something extraordinary and unsettling.”

Faculty member Franny Choi’s new collection, The World Keeps Ending, and the World Goes On (Ecco/HarperCollins, 2022) is, “a poetry collection for the ends of worlds—past, present, and future. Choi’s third book features poems about historical and impending apocalypses, alongside musings on our responsibilities to each other and visions for our collective survival.”

Executive Director of the Writing Seminars Mark Wunderlich’s poetry collection, God of Nothingness (Graywolf Press, 2021) is, “A magnificent book of hope and resolve written out of profound losses.”

In Director of Undergraduate Writing Initiatives Camille Guthrie's  fourth collection of poems, Diamonds (BOA Editions, 2021), she writes about the trials and surprises of divorce, parenting, country life—and the difficulties and delights of being alone, looking at art, and falling in love.

A Bennington-inspired classic for the ages, The Secret History (Knopf, 1992) by Donna Tartt ‘86 just celebrated its 30th

anniversary of publication. “Under the influence of a charismatic classics professor, a group of clever, eccentric misfits at a New England college discover a way of thought and life a world away from their banal contemporaries. But their search for the transcendent leads them down a dangerous path, beyond human constructs of morality.”

Less Than Zero (Simon & Schuster, 1985) published when Bret Easton Ellis ‘86 was still a student at Bennington College, is another contemporary classic and, “a raw, powerful portrait of a lost generation who have experienced sex, drugs, and disaffection at too early an age.” His new

novel, The Shards, will be released Jan 17, 2023 via Penguin Random House.

A hard-boiled detective tale full of talking animals and murder, Gun, With Occasional Music  (Harcourt Brace & Co, 1994) by Jonathan Lethem ‘86 is a classic genre-bender, one “mixing elements of sci-fi, noir, and mystery, this clever first novel from a beloved author is a wry, funny, and satiric look at all that the future may hold.”

For the Horror Enthusiast

What kind of gift list would this be if it didn’t highlight one of our most beloved former residents, the icon herself, Shirley Jackson? Jackson found inspiration on and around the campus, publishing chilling tales such as The Haunting of Hill House, “The Lottery,” and We Have Always Lived in the Castle, just to name a few. Jackson’s works “wittily remade the genre of psychological horror for an alienated, postwar America,” and make for a great gift for the person that enjoys sleeping with the lights on.

In a creative reimagining of Shirley Jackson’s life, Susan Scarf Merrell MFA ‘09 wrote Shirley (Plume, 2015), which “weaves events from Shirley Jackson's life into a hypnotic story line in this darkly thrilling novel,” which was also adapted for film in 2020.

What’s more terrifying than real life? Not much. Following A Killer by Design: Murderers, Mindhunters, and My Quest to Decipher the Criminal Mind (Hachette, 2021) by Ann Wolbert Burgess and cowritten with Steven Matthew Constantine MFA ‘14 is, “a vivid behind-the-scenes look into the creation of the FBI's Behavioral Science Unit and the evolution of criminal profiling, written by the pioneering forensic nurse who transformed the way the FBI studies, profiles, and catches serial killers.”

Associate Director of the Center for the Advancement of Public Action and faculty member David Bond’s new book, Negative Ecologies: Fossil Fuels and the Discovery of the Environment, “is a bold reappraisal of the outsized role fossil fuels have played in making the environment visible, factual, and politically operable in North America.”

The Storm Is Here: An American Crucible (Penguin Press, 2022) by Luke Mogelson ‘05, award-winning journalist and global war correspondent, details his time returning to the U.S. to report on the social discord during the pandemic in early

Michael Pollan '76 is a celebrated author and champion of learning, his bestselling books “about the places where nature

and culture intersect: on our plates, in our farms and gardens, and in the built environment,” and his latest book is a must-have for those wanting to learn more about the world of drugs, plants, and humans. This Is Your Mind on Plants (Penguin, 2022) is a fascinating dive into “how we think about drugs, and an exploration into the powerful human attraction to psychoactive plants—and the equally powerful taboos.” Read the book and then watch the docuseries on Netflix.

For the Fiction Lovers

The Beckoning World (University of Iowa Press, 2022) by Writing Seminars faculty Doug Bauer, is “set in the first quarter of the twentieth century and follows Earl Dunham. His weeks are comprised of six days mining coal, followed by Sundays playing baseball. Then one day a major-league scout happens on a game, signs Earl, and he begins a life he had no idea he could even dream.”

Writing Seminars faculty Elizabeth McCracken’s critically acclaimed new novel, The Hero of This Book (Ecco Press, 2022) is, “a taut, groundbreaking new novel about a writer's relationship with her larger-than-life mother—and about the very nature of writing, memory, and art,” and “a searing examination of grief and renewal, and of a deeply felt relationship between a child and her parents. What begins as a question of filial devotion ultimately becomes a lesson in what it means to write.”

With her debut novel Lungfish (Catapult, 2022), Meghan Gilliss MFA ‘14 has “Exquisitely written…the story of a woman grappling through the lies she has been told—and those she has told herself—to arrive at the truth of who she is and where she must go.”

“Flowing and churning and seething with a glorious surge of language, carried along by questions of survival and hope and the possibility of a better world,” Before All the World (Farrar, Straus and Giroux, 2022) by Moriel Rothman-Zecher MFA ‘23 is, “a mesmerizing, inventive story of three souls in 1930s Philadelphia seizing new life while haunted by the old.”

Named as one of the "Best Books 2022 So Far" by The New Yorker, Megan Mayhew Bergman MFA '10’s collection, How Strange a Season: Fiction (Scribner, 2022), features stories that are “so emotionally rich that they serve as portals into distinct interior worlds...this collection is distinct and vivid...As singular as it is atmospheric.”

by Namrata Poddar MFA ‘16 “questions the ‘mainstream’ Western novel and its assumptions of good storytelling [and] what connects the novel's web of brown border-crossing characters is their quest for belonging and negotiation of power struggles, mediated by race, class, gender, nationality, age, or place.”

For the Non-Traditional Nonfiction Fan

Dean of the College Brian Michael Murphy’s first book, We the Dead: Preserving Data at the End of the World (University of North Carolina Press, 2022), “traces the emergence of the data complex in the early twentieth century and guides readers through its expansion in a series of moments when Americans thought they were living just before the end of the world.”

Told through a hybrid style of art and memoir, Director of the Writing Seminars Megan Culhane Galbraith MFA ‘15’s The Guild of the Infant Saviour: An Adopted Child’s Memory Book (Mad Creek Books, 2021) is, “a dizzyingly inventive hybrid memoir of one adoptee’s quest for her past. Galbraith pairs narrative with images from The Dollhouse as she weaves a personal and cultural history of adoption as it relates to guilt, shame, grief, identity, and memory itself.”

Alec Wilkinson ‘74, staff writer at The New Yorker, has published a new book, A Divine Language: Learning Algebra, Geometry, and Calculus at the Edge of Old Age (Farrar, Straus and Giroux, 2022). Part memoir, part metaphysical travel book, and part journey in self-improvement, A Divine Language is one man's second attempt at understanding the numbers in front of him, and the world beyond. 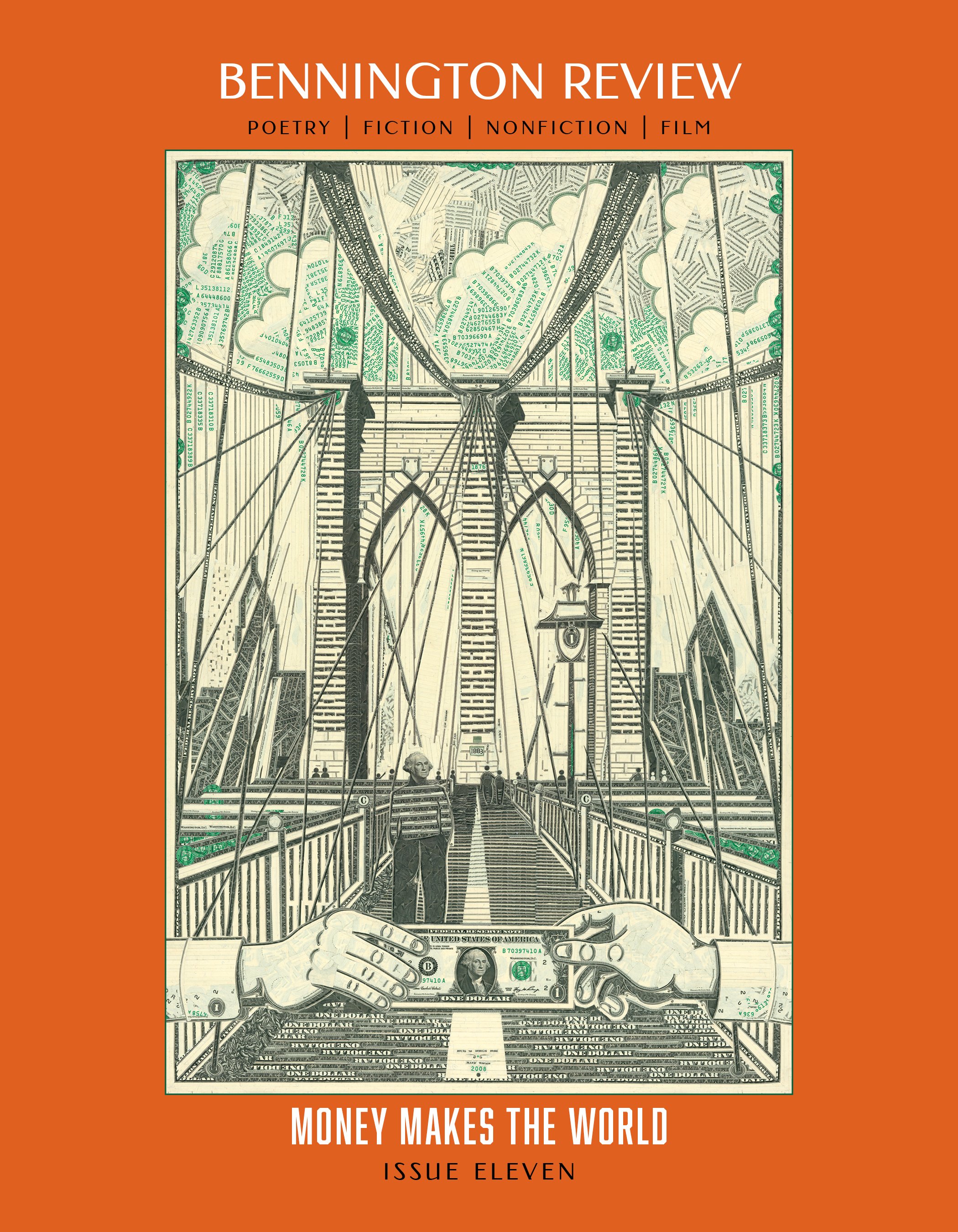 For the gift that keeps on giving, consider a subscription to the Bennington Review. A recipient of the 2022 Whiting Literary Magazine Prize, Bennington Review is a national biannual print journal of innovative, intelligent, and moving poetry, fiction, creative nonfiction, and film writing, housed at Bennington College.

***
Are you a member of the Bennington College community? Want your book to be included in our forthcoming roundup of books, or is your book being published in 2023? Fill out this form and we will reach out to you!