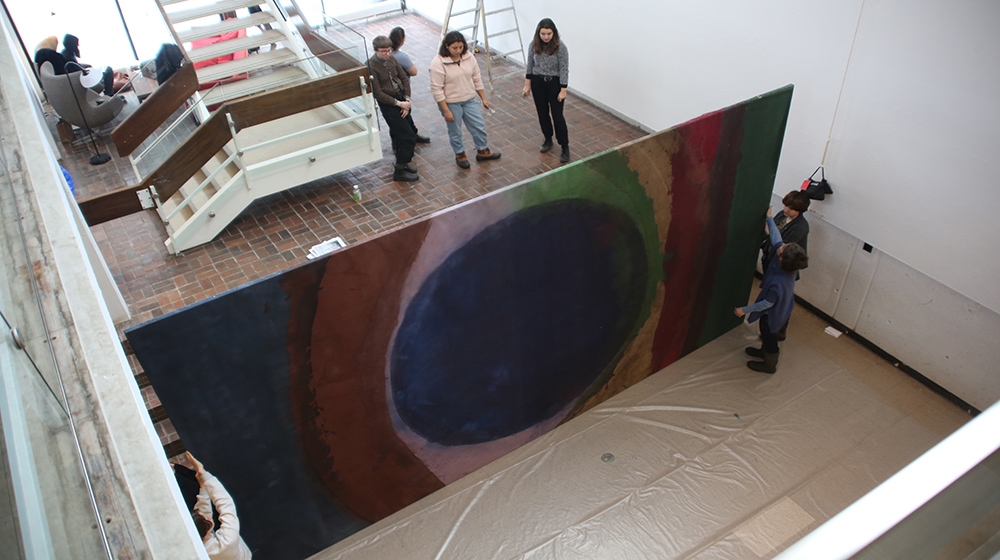 Students from Josh Blackwell's Intermediate Painting class stretch and install Alexander Liberman's "Big Blue Circle." The painting was last installed in 1964 in anticipation of Liberman's lecture at the College.

“It’s tremendously exciting to see the Liberman out of storage and on view after so many years,” Usdan Gallery Director and Curator Anne Thompson said. “One of the main goals—and delights—of the Unpacking the Vault research and exhibition is excavating significant yet lesser-known objects from within the college history and giving them the attention they deserve.”

This recent installation is the first time Big Blue Circle has been displayed since 1964, when it was originally shown and installed in the Deane Carriage Barn, then called The New Gallery, in preparation for a lecture led by Liberman, comparable to contemporary Bennington’s Visiting Artist Lecture Series (VALS).

The painting since then has been rolled up and held in storage, along with its original wooden stretcher bars. Big Blue Circle lives up to its name, measuring 9x17 feet. Students stretched the canvas over its original support and used a system of winches and pulleys, created especially for the occasion by Visual Arts Technical Instructor John Umphlett, to suspend the work high on expansive white wall across from the Usdan Gallery entrance.

“From the outset, not having stretched a canvas this large before, it was a really enlightening experience,” Visual Arts faculty member Josh Blackwell said. “What surprised me more than anything else was the way in which something that feels so monumental can also be so simple. Its structure is the same as something that’s much smaller, but you need more bodies to put it together, which is why this became such a team project.”

Liberman’s extensive artistic career included serving as art director at Vogue and, later, editorial director of its parent company, Condé Nast. Liberman was also a painter, photographer, and sculptor whose works are found in collections at the Metropolitan Museum of Art, Hirshhorn Museum and Sculpture Garden, and the Guggenheim Museum, among many others.

Part of my responsibility as an artist is not to think about art as just the making of the work, but also as its presentation, the way it circulates and appears in the world. Josh Blackwell

“The object’s display is just as important as the way it comes into being. It’s important to work with students to be able to show them how art is installed, whether on the wall or a pedestal or site-specific installation, and the ways in which meaning is impacted by the context of an artwork.”

The newly installed Big Blue Circle, Blackwell said, makes all the difference to VAPA’s atmosphere, joining together the space’s dual purposes of education and exhibition.

“Before the painting was there, it felt anonymous, like it was waiting for something,” Blackwell said. “But with the painting, it feels like a room, a space that’s fully realized.”

Students Reflect on the Process

“The painting commands more attention when stretched. When it was centered and eye level to where you are when standing on the balcony, it fills the entire room. It’s a huge piece that you’re drawn to. When you place it higher on the wall, it’s almost as if it’s looking down on you, and you don’t get that same experience.” Elsa Lindy ’19

“Unrolling the painting, we all saw that there were old flecks of newspapers that were in it. It was a strange experience to revisit such an old piece and be part of that piece’s history and honor the work.” Gabriela Yadegari ’21

“I was surprised by seeing the painting all the way up and also as low as possible. All the way up felt like too much for how the painting could stand up in the space. When it was at mid-range, at eye level, it invited the space, it felt more personable.” Flannery McDonnell ’19