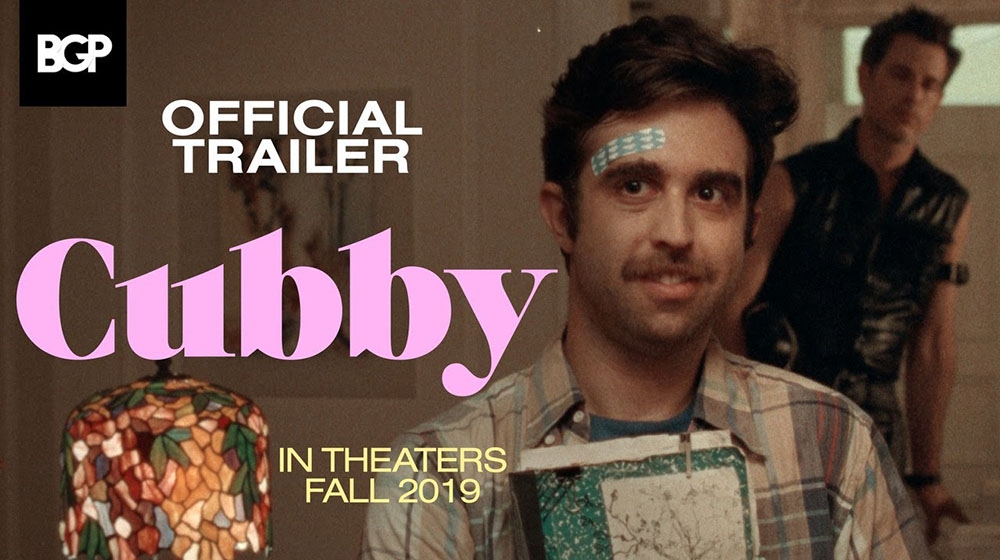 Cubby’s next stop is New York City, where the film will be a centerpiece at October’s NewFest. It will subsequently have a limited theatrical release on November 1, 2019, and be available to rent from iTunes and Amazon.

The experience of directing and promoting a feature film has been a new one for Mankoff, a theatre actor whose film background is largely self-taught.

Mankoff first got his start in film by “deciding I wanted to make my own work, which is one of the best ways to get work as an actor.”

“I started down that road, but I had never made a short film,” said Mankoff. “I’d written some things I’d never produced, to try my hand in front of the camera. I played with putting little scenes together without any story, just experimenting.”

Mankoff started down this self-charted path early on in his college years. Before transferring to Bennington, where he studied Theatre and Philosophy, Mankoff had attended several different schools, each concentrating on a different area of interest.

At Bennington, I didn’t have to choose; I could find an integrated way to work and grow in both of those fields.

“I was attracted to Bennington because of its interdisciplinary offerings,” said Mankoff. “I had gone to so many schools because I couldn’t figure out what I wanted to do. I studied Philosophy at St. John’s College and Theatre in New York City, but at Bennington, I didn’t have to choose; I could find an integrated way to work and grow in both of those fields.”

After completing his undergraduate work, Mankoff continued integrating his interests at New York University’s Gallatin School of Individualized Studies. He was directing Cubby during his time at graduate school, where his academic focus was in Philosophy.

Mankoff first gained professional filmmaking experience when Matt Dolkas, his brother-in-law who worked for the Nicaraguan conservation group Paso Pacifico, invited Mankoff to join him on a trip to shoot a documentary for the organization.

“Matt worked for their media department, so he invited me to gain experience working with a camera, interviewing people, and doing documentary research,” said Mankoff. “That trip got me footage for a reel I could use to get other directing jobs.”

Mankoff’s involvement with Cubby, he jokes, “sounds like a cliche LA story, but it actually happened to me in New York.”

Mankoff had been working as a barista in Brooklyn when he became friends with a man who came into the coffee shop each day.

“We got to know each other, and when he learned that I wanted to make movies, he mentioned a guy in his building he thought I should meet, who was a producer,” said Mankoff.

From this initial introduction, Mankoff later connected with Cubby’s screenwriter and star Mark Blane, who mentioned that he was looking for a director for the film. Blane gave Mankoff a copy of the script and invited him to pitch the team.

“Cubby is about Mark, who is a babysitter—which is a job I’ve never done—and is gay—which I’m not—but he’s an artist, and I connected to that,” said Mankoff. “But the main thing that drew me to Cubby was the relationship between Mark and Milo, the little boy whom he takes care of. Mark is kind of a man-child, and it was fascinating to see him learn to take care of himself through being responsible for this boy, who is also an awkward outsider.”

As a first-time director, Mankoff found his experience working with fellow actors helpful.

“I felt confident in my ability to have a conversation with actors about their performances,” said Mankoff. “But I was a young theatre actor, so I had to learn what it’s like to direct actors and develop individual languages for working with each person. How you think about performance in general is different than how you talk to an actor about their particular performance.”

Mankoff also put forward his perspective on the overall aesthetic of the film.

“I wanted to shoot on 16mm film, even though we were working with an Ultra-Low Budget, and shooting on film leaves no room for error. For a first-time filmmaker, there’s hubris in thinking you can pull that off,” said Mankoff. “I was afraid to talk to the producers about it—I was sure they’d say no—but it turned out that Sinisa Kukic, our cinematographer, was a 16mm pro. That made us feel we could do it safely, like he wouldn’t let us screw it up too badly!”

Shooting Cubby on 16mm film “stitched together” all the performance styles in the movie, which switches between a coming-of-age comedy and surreal sequences featuring the fantastical superhero Leather-Man, who is conjured from a psychedelic cupcake.

“The 16mm film bridges that visual gap between reality and fantasy,” said Mankoff. “In this process, I learned to trust my aesthetic instincts and to allow other people to guide the technical aspects. As a director, I learned I didn’t have to be an expert in everything; I just had to focus on being an expert storyteller.”

Going forward, Mankoff is keen to develop another film and is currently at work on a script with his fiancee, Mae Mitchell ’10.

“It’s a bit funny, this idea came while touring with Cubby. While we were in Italy, we stayed at an incredible hotel at the airport outside of Milan, which had amazing architecture. I’m kind of an architecture nut, so we started writing Malpensa, which is primarily set in this hotel and is about a twisted family relationship in the Milan fashion world.”

When Mankoff reflects on his journey to and through Bennington and his career beyond, he wryly notes, “whatever you think your path is going to be, you’re probably wrong.”

“However, let the skills that you’ve been honing and the curiosity that brought you to a place like Bennnington continue to inform the decisions that you make,” said Mankoff. “Don’t get set on where you thought you’d be a year—or two or three or four—after school. Always pursue the wonder that drew you to a place like Bennington. It’s such a valuable skill to be able to envision your own path forward.”