Roots and Uprooting: How Gabriela Yadegari '21 is Changing the Magazine Landscape

In a culture inundated with digital content, a print magazine might seem like an unusual focus for a new publication. However, Polychrome Mag., the first issue of which will be released in March, is a self-proclaimed iconoclast. Culture Editor Gabriela Yadegari ’21 is among Polychrome’s six founding collaborators, who will use the magazine to showcase creative people of color, reshaping how mainstream media and audiences view them and their work. 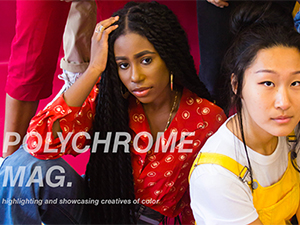 “Magazines have always been a staple of American culture,” Yadegari said. “As a teenager, I went through one of those phases where you cut up magazines and paste them on your walls. It was one of my first steps in an artistic direction, but at the same time, I wasn’t represented by anyone in those pages.”

Printing copies of Polychrome is a way to restore and widen the existing format. By using a traditional media that has largely fallen out of prominence, creatives of color have an opportunity to insert themselves to the cultural narrative and “set it straight, put it back where it belongs.”

From the Big Apple to Bennington

Yadegari first met Polychrome’s Editor in Chief Micah Pegues at a summer film workshop at New York University. The two stayed close friends, eventually both enrolling at NYU. However, Yadegari left the university after one semester.

“I was alienated at that school. Micah and the rest of my friends were my only grounding points. I coped with feeling out of place by collaborating with her. I self-printed my own zine, AVANT Girl, and it became something fun to do while feeling lonely in the city,” Yadegari said.

Yadegari’s work on AVANT Girl, which showcased female, transgender and non-binary artists, inspired Pegues to develop a bigger independent magazine geared toward PoC. As Yadegari left NYU for a gap year, Pegues assembled a team of her old friends, now spread across the United States, to work on Polychrome.

“A few of us had been struggling to find our spaces on college campuses. We craved a space for ourselves, so it was easy to get together to make that and extend it to other people who felt the same need,” Yadegari said.

Meanwhile, Yadegari found a better academic fit at Bennington College. She described the small campus as “an emotional backbone”: a contrast to the large, whirlwind environment at NYU.

I initially chose NYU for the big name, but I eventually realized that the name didn’t matter. My need to be heard, cultivated, and listened to and to try different things weren’t being met there. They would be met at Bennington. Gabriela Yadegari ’21

Now entering her second term, Yadegari has used her time at Bennington to both refine her talents and find unexpected new passions.

“I work a lot in painting. Working with Josh Blackwell has been amazing; it’s been the first time I’ve been able to stylistically explore and deconstruct my prior knowledge about art and technique,” Yadegari said.

Yadegari’s visual arts immersion at Bennington illuminates her role at Polychrome. As culture editor, she uses creators’ backgrounds as a lens through which to interpret their art. Highlighting an overarching cultural narrative in creative work, Yadegari explained, allows PoC to recognize and celebrate their roots.

Yadegari has used her first Field Work Term to engage with two sites: an elementary school and a radio station. Though she’s long loved bringing her arts advocacy work to children, her newfound interest in radio was a Bennington discovery.

“I’ve been working at B-RAD for the past term. Coming from a film background, I didn’t think I’d be interested in radio, but I love it. It’s so accessible, and that’s another overlap with Polychrome: the accessibility of art and media,” Yadegari said.

Polychrome’s first print issue is a step toward this inclusivity. Already, the magazine has a network of supporters: a January Kickstarter campaign to cover printing costs nearly doubled its original $4,516 goal.

When the issue is released, copies will be mailed to readers who donated to the Kickstarter campaign. Several coffee shops and independent bookstores around New York City will also carry the magazine. For the most part, however, the Polychrome team will distribute the magazine on their own.

“We see a need for the magazine, and we initially want to address that need on an individual basis,” Yadegari said. In the case of collaborators, readers, and vendors alike, “it’s about fostering independent relationships that are interested in the project.”

Potential collaborators may reach out via Polychrome's website or email the editors. Bennington’s community is also invited to connect with Polychrome’s work.

“The community at Bennington has been supportive of Polychrome already,” Yadegari said. “I want to extend to them the chance to contribute to the magazine.”