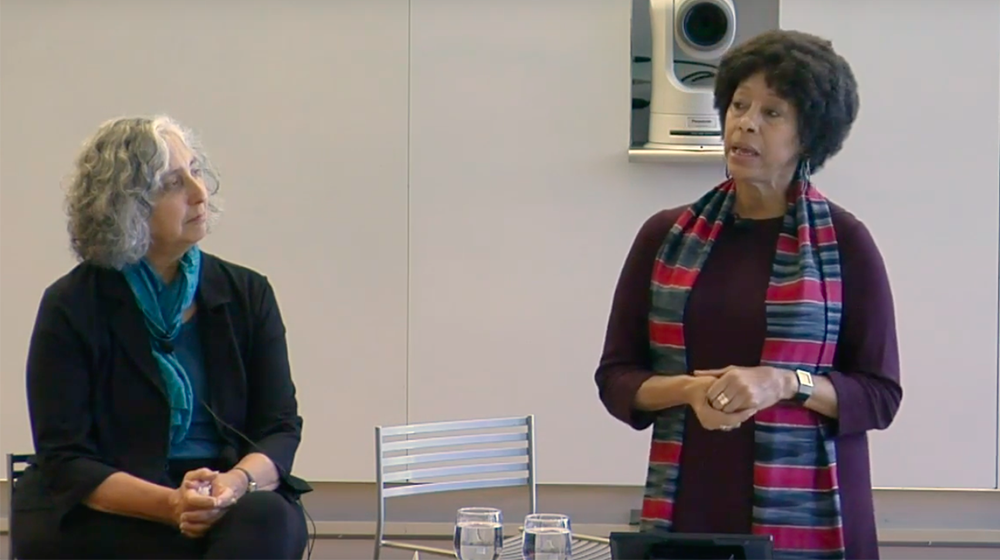 “One of our goals here at Bennington is to empower students to respond to the urgent problems of our time. We want them to be ready for the world as it is, but eager to make it better,” said President Mariko Silver. “Few embody this righteous mission with such passion and tireless rigor as Gay McDougall.”

McDougall has been a human rights champion within the United Nations for more than three decades. She served in the trailblazing role as the first UN Independent Expert on Minority Issues and is currently Vice Chair of the UN Committee on the Elimination of all Forms of Racial Discrimination.

For 15 years, McDougall worked to secure the release of thousands of political prisoners in South Africa and Namibia. She was appointed to the electoral commission that ran the first democratic elections in South Africa that ended apartheid and installed Nelson Mandela as president.

In 1999, Gay was awarded a MacArthur Foundation Genius Fellowship for her work on behalf of international human rights, and in 2015 the Government of South Africa bestowed on her their national medal of honor for non-citizens, the Order of O.R. Tambo Medal for her contributions to ending apartheid.

McDougall was honored at a presentation on September 29 on the College’s campus.

Bennington creates space for you in your mind to think new thoughts and even to be creative in a way that you’ve never been.

Established by parents of a Bennington alum from the Class of 2000, the annual $5,000 award has no restrictions on how it may be used. The 2018 honoree will be announced in the fall and will be invited to campus to meet with current students, allowing them to connect with an exceptional leader who is affiliated with the College.

Gay Johnson McDougall ’69 served as the first United Nations Independent Expert on Minority Issues from 2005 to 2011. She was executive director of the international NGO Global Rights from 1994 to 2006. From 1997 to 2001, she served as an Independent Expert on the UN treaty body that oversees compliance with the International Convention on the Elimination of All Forms of Racial Discrimination, a committee to which she recently re-elected for a second term. During her first term on the committee she negotiated the adoption of General Recommendation XXV on the Gender Dimensions of Racial Discrimination, which requires governments to report explicitly on the situation of women impacted by racial discrimination. She played a leadership role in the UN Third-World Conference Against Racism.

As Special Rapporteur on the issue of systematic rape and sexual slavery practices in armed conflict when she served on the UN Sub-Commission on Promotion and Protection of Human Rights (1995 to 1999), McDougall led that body in calling for international legal standards for the prosecution of such acts. She was one of five international members of the South African governmental body established through the multiparty negotiations to set policy and to administer the country’s first democratic, nonracial elections in 1994, resulting in the election of President Nelson Mandela and the transition from apartheid. For 14 years prior to that appointment, she served as director of the Southern Africa Project of the Lawyers’ Committee for Civil Rights Under Law. In that capacity, she worked with South African lawyers to secure the release of thousands of political prisoners.

McDougall is currently a member of the faculty of the Oxford University Masters of International Human Rights Law Programme and Distinguished Scholar-In-Residence at the Leitner Center for International Law and Justice at Fordham Law School. She was the Robert Drinan Visiting Professor in Human Rights at Georgetown University Law Center from 2011 to 2012. She was a distinguished scholar-in-residence at American University Washington College of Law from 2006 to 2008 and a professor in the annual Academy on Human Rights and Humanitarian Law at American University.

In 1999, McDougall was a recipient of the MacArthur “Genius” Award. In 2015, the Government of South Africa bestowed on her the Order of O.R. Tambo Award for her contributions to ending apartheid. She has also received the Butcher Medal of the American Society of International Law for outstanding contributions to human rights law and the Thurgood Marshall Award of the District of Columbia Bar Association among numerous other national and international awards.

McDougall studied social science at Bennington College, and received a JD from Yale Law School and an LL.M. from the London School of Economics and Political Science. She has honorary doctor of laws degrees from Georgetown University Law Center, the University of Witwatersrand (South Africa), the School of Law of the City University of New York, Kalamazoo College, and Agnes Scott College.