Bennington Drama students presented a Zoom reading of Can't Weed All Just Get a Bong?, a modern-day Alice's Adventures in Wonderland adapted by Sonise Lumbaca '21.

Sonise Lumbaca '21 wrote Can't Weed All Just Get a Bong? as an assignment for Sherry Kramer's Adaptation course, which she took in Spring 2019.

"I always wanted to experiment with Alice's Adventures in Wonderland and give it a modern twist," said Lumbaca.

A variety of classmates from Lumbaca's acting classes—including An Actors Technique: Nuts & Bolt with Dina Janis and Meisner Technique with Jennifer Rohn—participated in the reading. Dina Janis was the faculty chair for the reading performance, providing counsel and suggestions.

"I'm thankful to Sherry for teaching me the intricacies of adaptation playwriting—where the birth of this play took place—and I credit Dina for chairing this project, giving counsel, and being our overall cheering squad during the process as she attended rehearsal and gave actor suggestions," said Lumbaca.

Can’t Weed All Just Get A Bong?

Can’t Weed All Just Get A Bong? is a dark comedy about Alice, who’s practically an adult, as she sets out to not be controlled in life—whether it be by her older sister Heather, her parents, societal norms, or even the government.

One day, Alice is sent on a task to link up with Heather’s on-again-off-again boyfriend Nivens. This excursion takes Alice on a trip through what seems to be a parallel dimension; but is it really? And thus begins Alice’s chase as she attempts to navigate this world in locating Nivens. Along the way, she finds herself amidst chaos as she comes across quite the characters: an obnoxious, yet intoxicating, rabble-rouser named Katherine Chester (but you can call her Kat); Hatter, the local pub owner who enjoys throwing special brownie parties at his establishment; twins Rose and Rose who happen to be personal assistants to Queeny, the antagonist; Queeny, the wife of Hatter, whose desire for control becomes the catalyst that brings both worlds together, creating quite the adventure Alice never intended; and many more colorful characters. 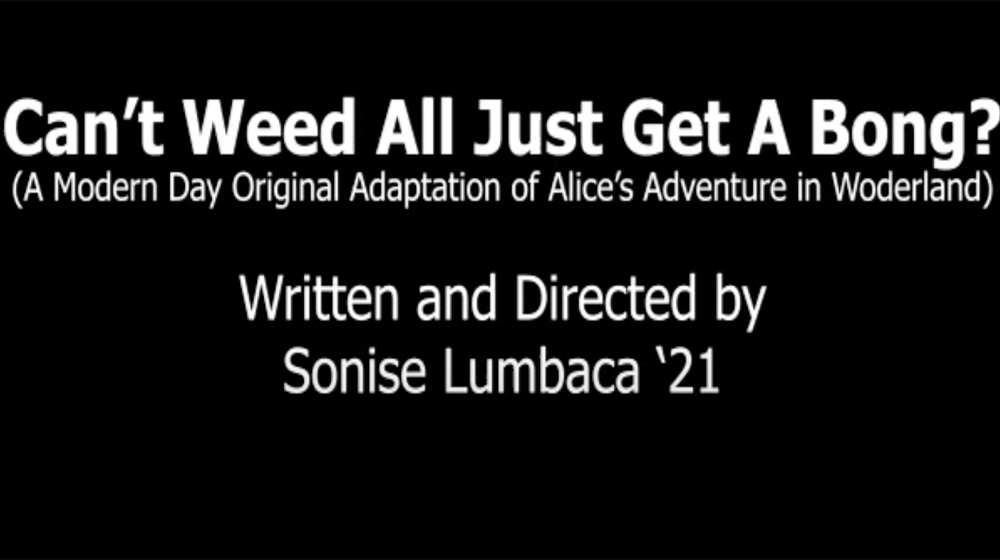 Can't Weed All Just Get a Bong?