2019 will be an exciting year of transition across Bennington College’s campus.

When the newly renovated historic Commons reopens in the spring, among other changes, dining services will also move from its temporary home in the Student Center back into Commons. The Student Center, which underwent a renovation of its own in order to successfully function as an interim dining hall, is now poised to be recreated and reimagined once again.

Over the Fall 2018 term, the thirteen students in (Re)Center: Reimagining an New Student Center, a course led by Andrew Schlatter and Donald Sherefkin, took on the challenge of breathing new life into the Student Center, culminating in a public presentation of the class’s cohesive plan for a newly envisioned space.

In the world of architecture, explained Sherefkin, this bottom-up approach to design is unusual.

“Nobody else does this. Architecture always happens from the top down: the owner stipulates the program, the architect develops a design to satisfy that request, and they work from there,” said Sherefkin. “But here, the students were tasked with developing the program."

“By putting the student experience first, (Re)Center embodied what Bennington is preaching,” said Luis Figueroa ’21, who studies Math and Architecture.

I thought it was a very Bennington thing to do, to assign the designing of a building to the students.

Though (Re)Center is an architecture-based course, students from all disciplines enrolled, bringing with them a wide range of backgrounds, skill sets, and interests in campus programming.

Hannah Gray ’21 studies History, Public Action, Literature, and French. Though she’d never before taken an architecture course, her interest in library science led her to (Re)Center.

“I’m considering becoming a librarian, which entails thinking about the library as a public space,” said Gray. “I’m interested in how public places can best fit their communities and how architects can design with the community in mind.”

“This course intrigued me because I’m interested in reconstructing a building according to the lifestyle of its people,” said Maskay. “So I wanted to get a view of what reallocating a building or designing its interior spaces involves.”

The class began by surveying the College’s community to best determine what features students, faculty, and staff wish to see in the Student Center. They received input from 124 respondents.

“As an upperclassman, I experienced the former Student Center. Now, since that space isn’t available, the lack of social options is noticeable,” said Española. “Going into this course, I thought not just about what I want to see in the new Student Center, but what my peers want as well. I wanted to create a space that has something for everybody.”

Many survey responses spoke to students’ need for public, non-academic spaces in which they can relax with their friends or host social club meetings, a need that has been acutely felt during this period of campus renovations.

“If Commons were already open, people wouldn’t be thinking as hard about what was missing on campus, but since neither Commons nor the Student Center are available, people realize what they really want,” added Gray.

“There’s a lot of tension between the different words in that word cloud,” said Española. “That’s not because of factions in our community but because there aren’t enough distinct spaces that do feel cozy or do feel active. Even though these concepts seem to be in conflict with each other, the class had to reconcile how to fit these ideas into the space.”

Students then worked individually on concept plans for the Student Center. They considered factors like programming, traffic, and light; brainstormed campus needs and wants based on the survey results; and met with College staff and faculty.

As a starting point, Schlatter and Sherefkin encouraged the class to brainstorm ideas without regard to budget or feasibility.

“As a class, we thought about every possibility, considering open and confined spaces, as well as ideas of play and wellness that recurred in the survey,” said Lulu Wiley ’20, who studies Visual Arts.

“In the last week of the course, I approached Don about including a labyrinth in the space,” said Wiley. “Initially, I was like, ‘Let’s put it smack in the middle!’, but Don offered me this book to read about labyrinths, which are sacred, contemplative symbols. After looking over the diagram of our final design, we found a corridor between our proposed basketball court and indoor garden, which is a transitional space we thought would be better for the labyrinth.”

“We loved the idea of turning the recent addition into a recreational area,” said Charlotte Zinsser ’21, who studies Painting and Writing. “We went through a lot of different ideas to get to that decision, though. My favorite one was the idea to suspend a taut net from from the ceiling, which would have rope ladders and platforms to climb up. We’d have a skylight in the ceiling, so you could lay on the net, suspended, looking at the sky.”

While the suspended net did not make it into the students’ final proposal, the unconventional uses of space, said Zinsser, is what will ultimately make the new Student Center an attractive gathering place for students.

“One of the cool features that made the cut was a big loft area, which you can sit underneath or on top of. There are also big, spiraling stairs leading to it that you can sit on,” said Zinsser. “I wouldn’t go all the way to the Student Center just to sit on normal chairs, but I’d want to go if there was something fun, exciting, and different about it.”

At the midway point in the term, the class came together to decide upon a unified proposal.

“Initially, we tried to tackle design on our own or in small groups, but we reached a point where we realized we had to come out of this course with one or two proposals,” said Española. “So the class decided to work on just one plan. It was a great moment, but if we hadn’t had the time to work individually and understand the project’s layers and challenges, we might not have felt ready to come together.”

“Students should have input on how the Student Center turns out,” said Gray. “Even though anybody could have given a survey to the campus community, having students decide the questions to ask brought a new perspective that might not have happened otherwise. Outside contractors wouldn’t know as much about what students feel is missing or what appeals to them. But students understand the personality of the school.”

The completed Student Center proposal is a necessary first step to the renovation process, which will begin in summer 2019, following the reopening of Commons.

“Classes like (Re)Center are important because they can inspire those who aren’t necessarily diehard architecture students to engage in this process,” said Wiley. “For the architects, this is a project with a great amount of freedom and funding, as well as a huge opportunity to crowdsource ideas directly. It’s exciting for everyone.”

In addition to the new perspective they gained in (Re)Center, the students also value the enduring legacy they will leave at their school.

“It’s important for students to make something that affects the College itself,” said Zinsser. “(Re)Center took a visual arts approach to design a work of art that will exist as long the Student Center itself. It’s rare and lucky that we’re here at a time when the school is changing, and we can be involved in that process.” 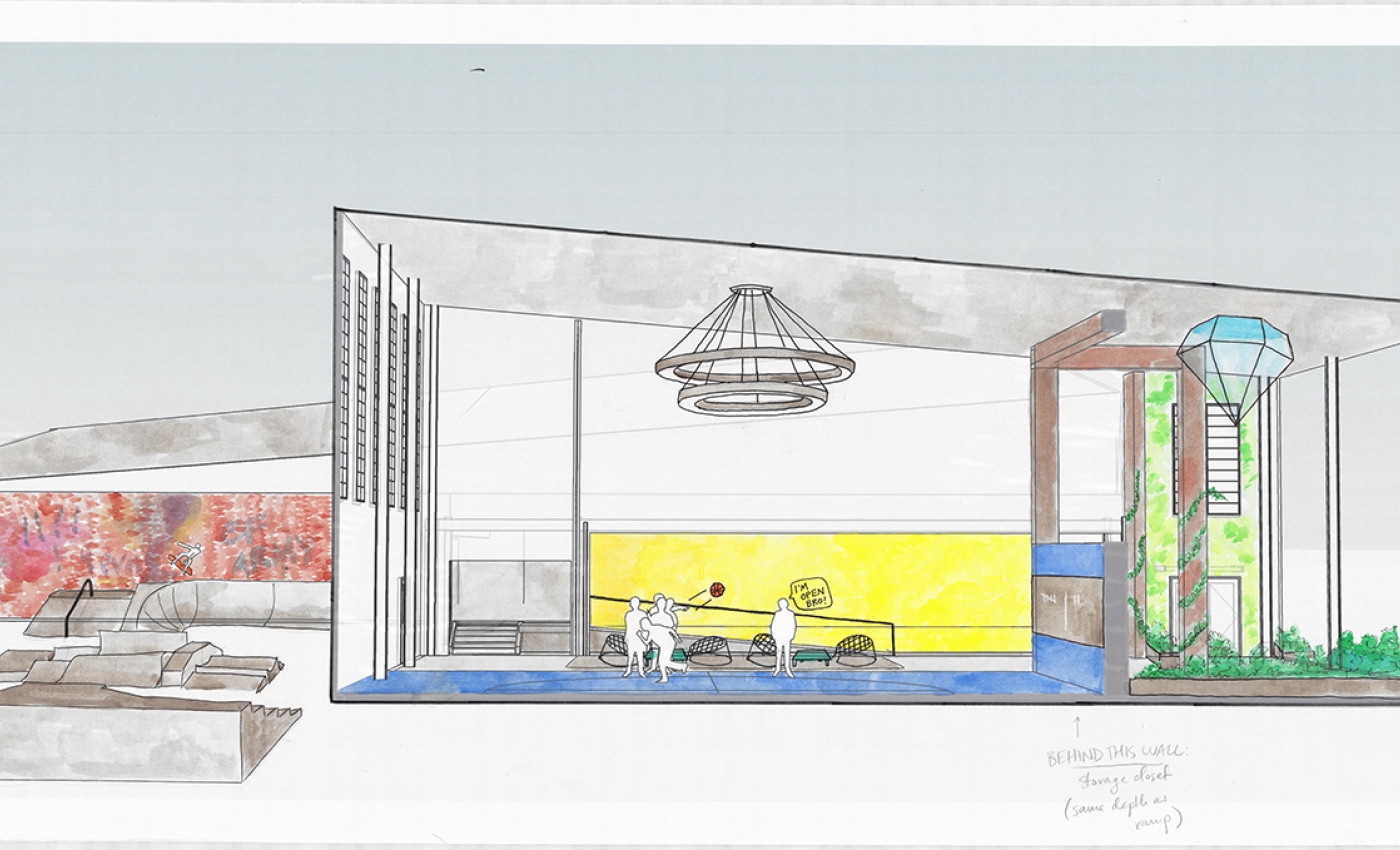 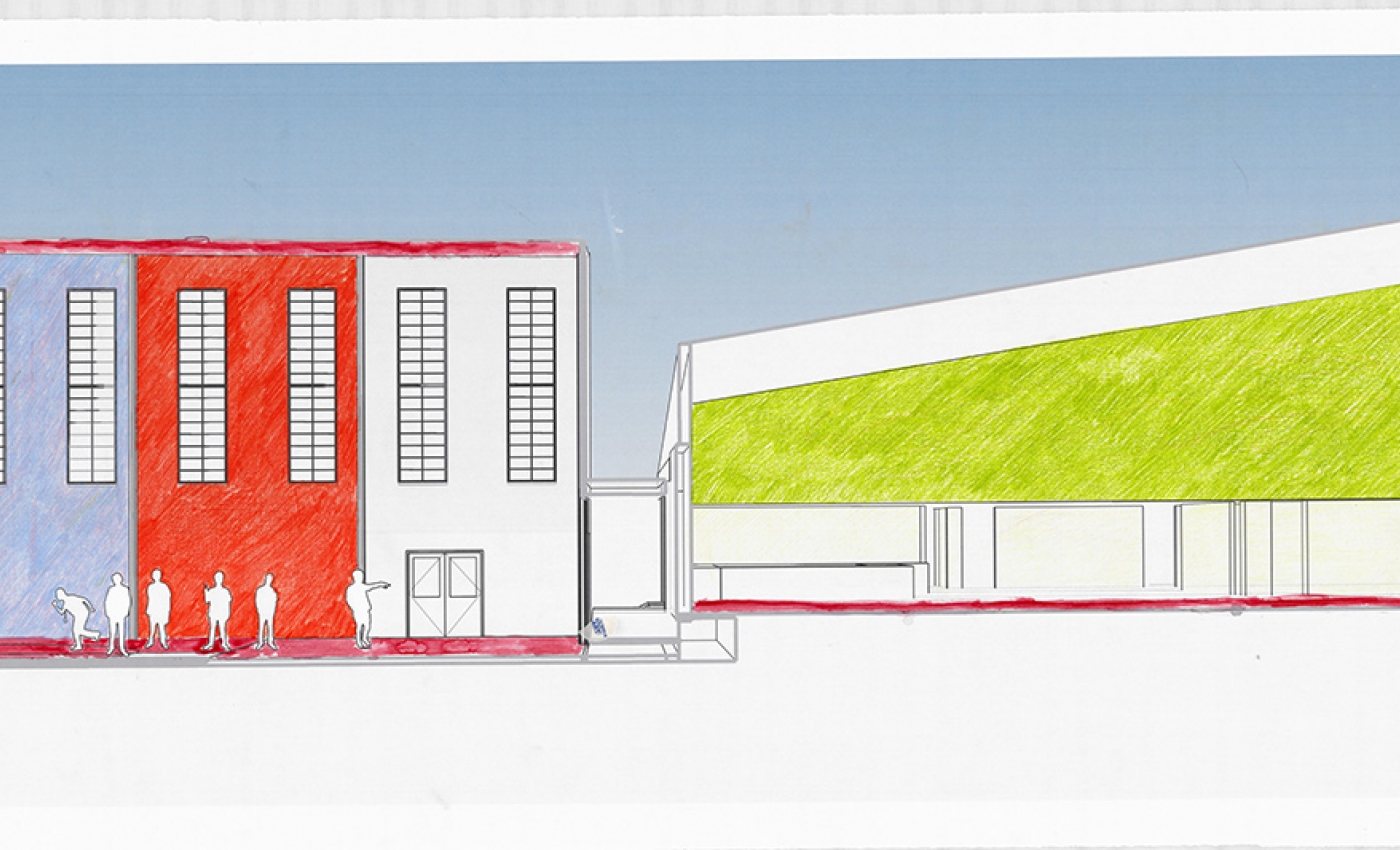 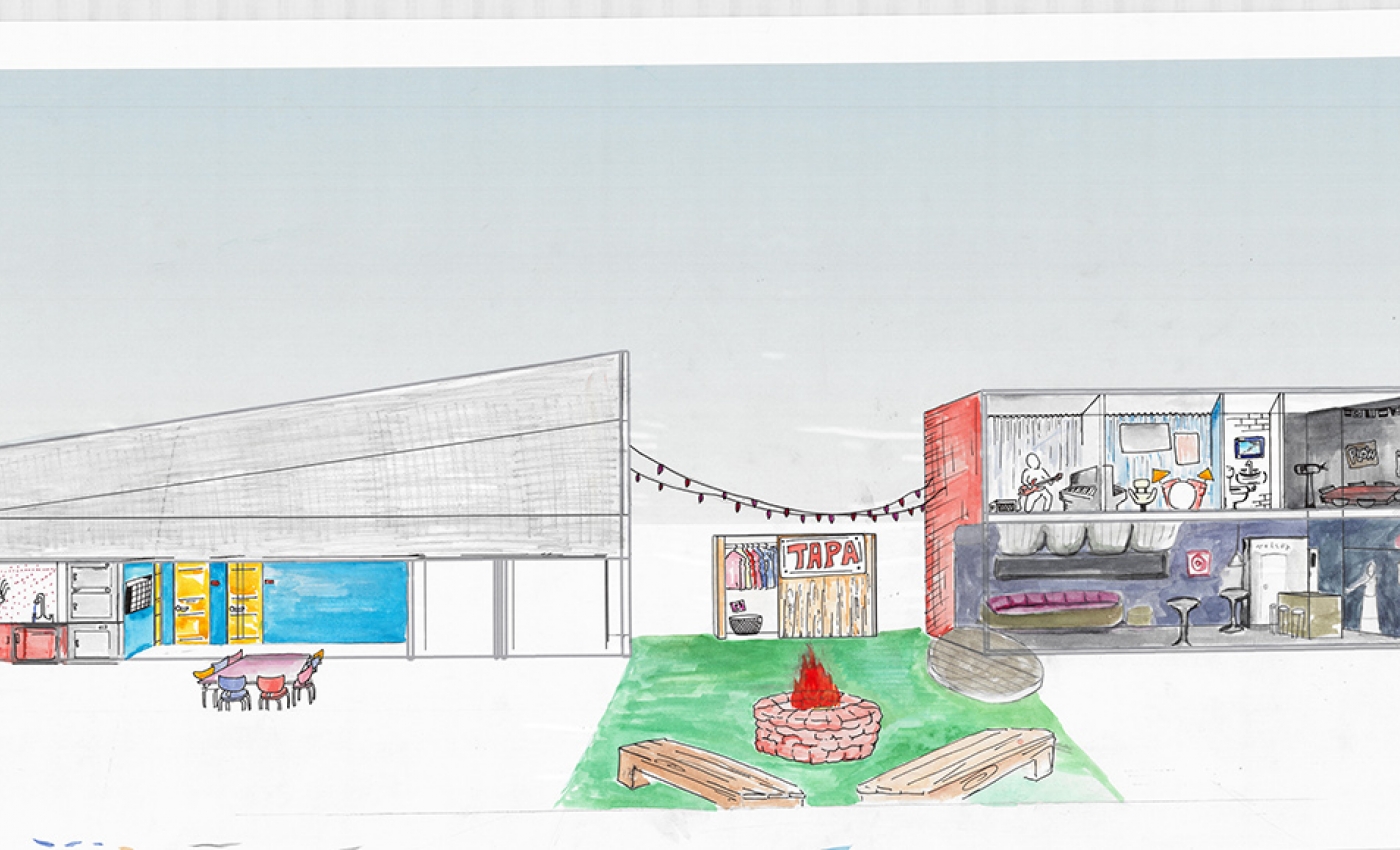 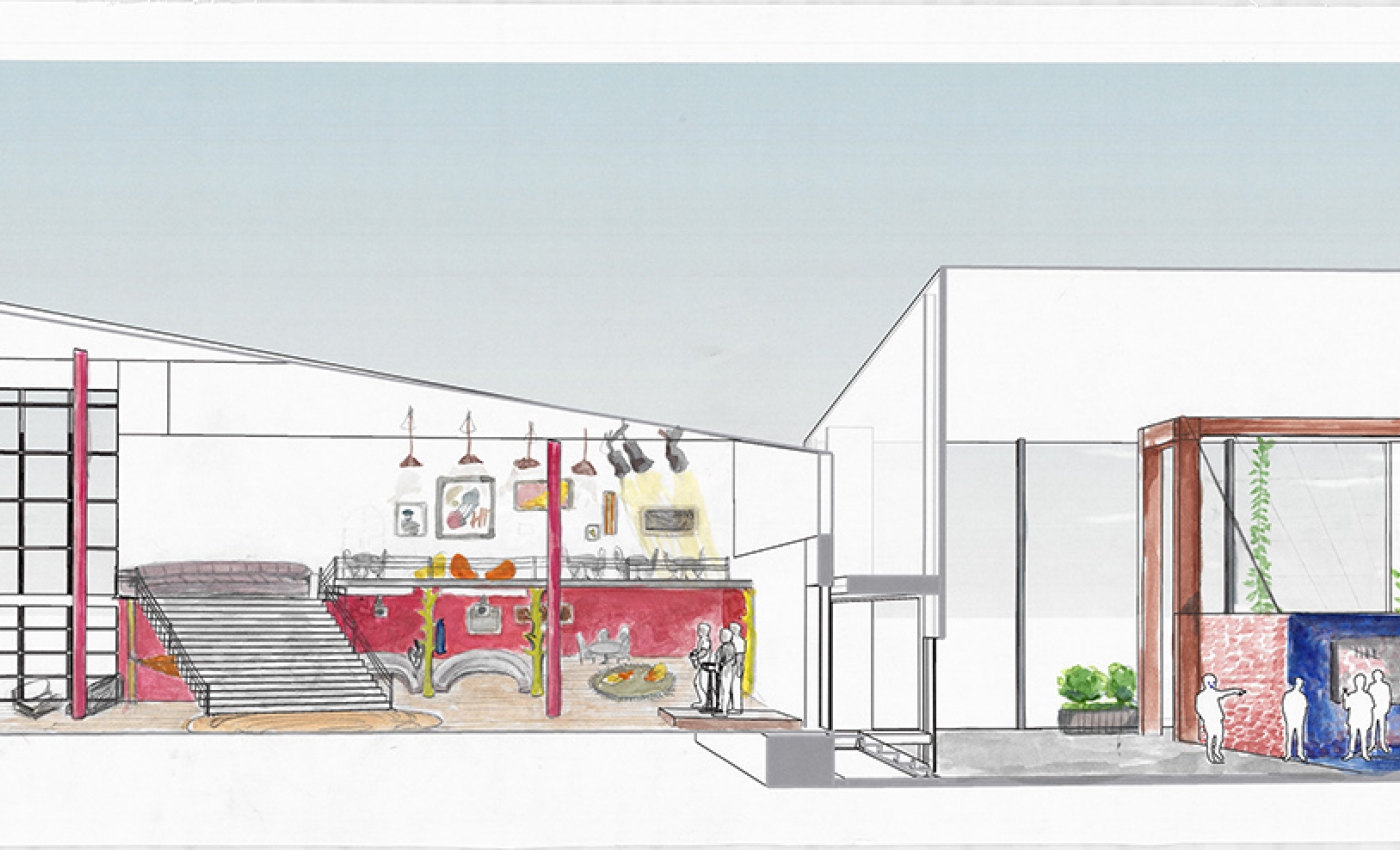 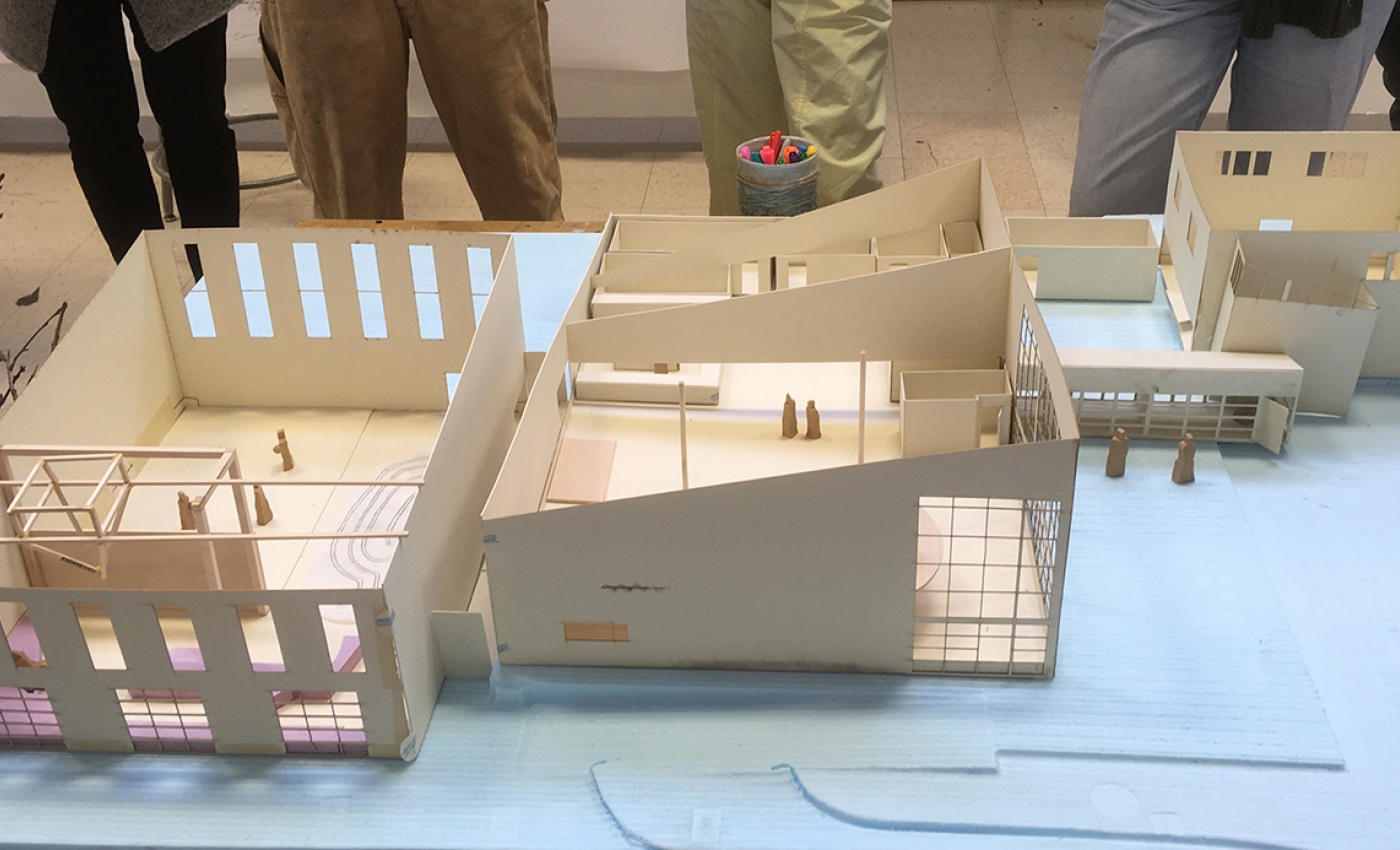 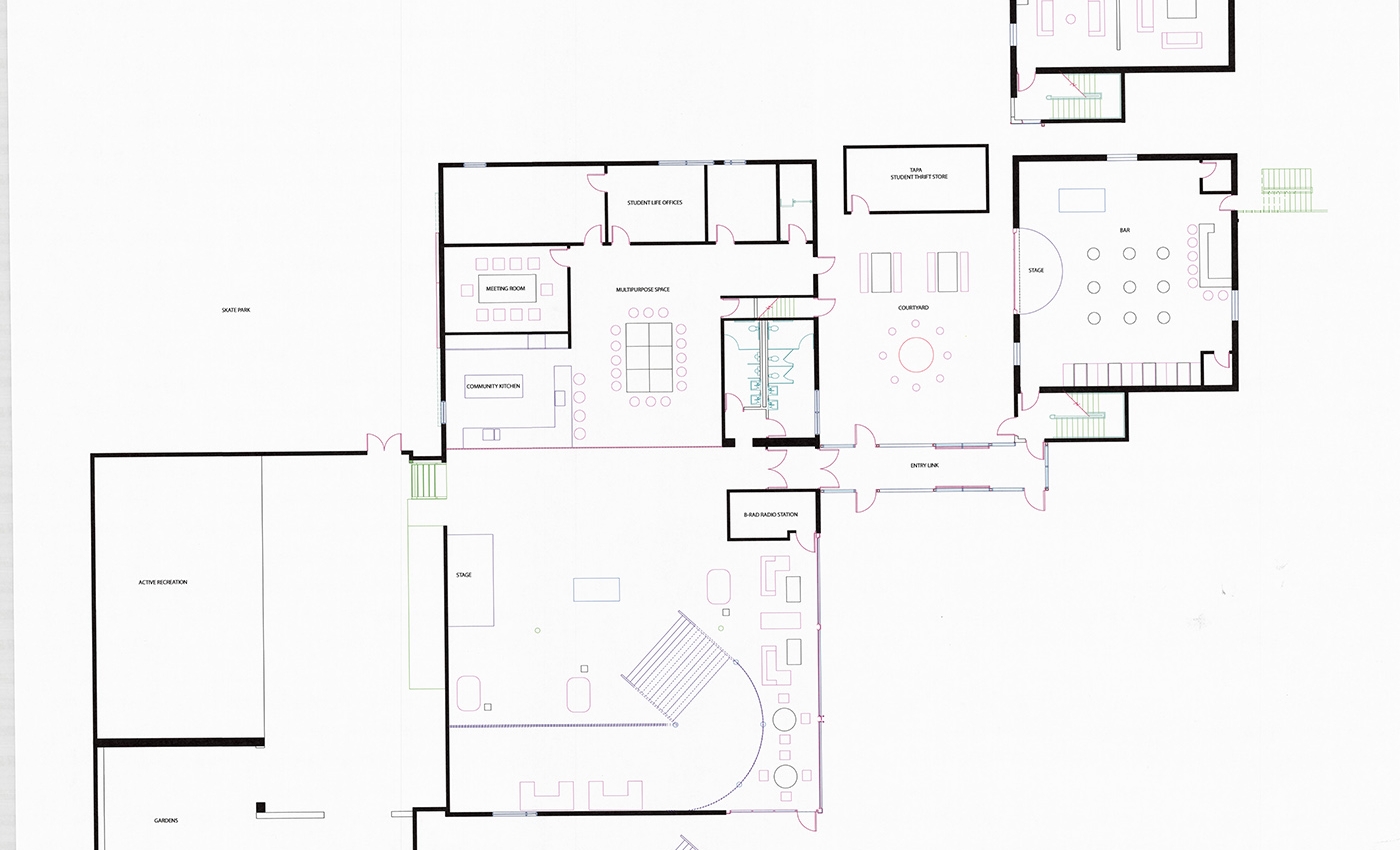