“John Bertles has built something entirely new and impactful in his quest to fuse music, environmental stewardship and youth opportunities,” said Interim President Isabel Roche. “His work embodies not only the spirit of the Elizabeth Coleman Visionary Leadership Award, but also the entrepreneurial and civically-engaged spirit of Bennington College. We are thrilled to honor him with this award.”

While a student at Bennington, Bertles studied Music, with supporting work in Literature and Drama. He frequently studied clarinet with and played in ensembles directed by the late Gunnar Schonbeck, who was known for his wide-ranging collection of eclectic instruments, handmade from unconventional materials.

As a graduating senior, Bertles’s advanced work included composing music and writing book and lyrics for his own operetta, The King and His Jester.

My mentor at Bennington College, the late Gunnar Schonbeck, always counseled to seek deeper meaning through the interconnectivity of subjects: meanings which are complex, difficult, and diverse—and consequently richer both in scope and nuance.

Since 1988, Bertles has co-directed Bash the Trash Environmental Arts, which he also co-founded with Carina Piaggio, his wife and creative partner. Combining science, music, and environmental awareness, Bash the Trash builds, performs, and educates with musical instruments made from reused and repurposed materials. With a team of nearly 40 performer/educators across the country, Bash the Trash reaches over 60,000 students a year in live performances and residencies, and has ensembles in Boston, Detroit, Los Angeles, and New York City.

To bring their message of science and sustainability to a wider audience, Bertles and Piaggio inaugurated their own environmental festival in June 2019. The first annual “RiverBash” Eco-Music Festival was held on the banks of the Hudson River and featured music from Bash the Trash ensembles, eco-information tables, sustainability activities for kids and families, and a zero-waste footprint.

In 2018, Bertles worked alongside orchestrator Michael Starobin ’79 to create a unique set of musical instruments for the Broadway hit Once on This Island, for which he and Starobin were each nominated for a Drama Desk Award for Best Orchestration. Once on This Island won the 2018 Tony Award for Best Revival of a Musical and garnered a Grammy Award nomination for Best Cast Album.

Bertles will be honored at a presentation during Bennington College’s All-Class Reunion, September 27-29 on the College’s campus.

“I'm delighted and honored to accept this award. My mentor at Bennington College, the late Gunnar Schonbeck, always counseled to seek deeper meaning through the interconnectivity of subjects: meanings which are complex, difficult, and diverse—and consequently richer both in scope and nuance,” said John Bertles. “In Bash the Trash, we embody that concept, using our cool and weird musical instruments as vehicles to teach and entertain, and ultimately inspire children and educators to seek those deeper connections between art, science, and the environment. 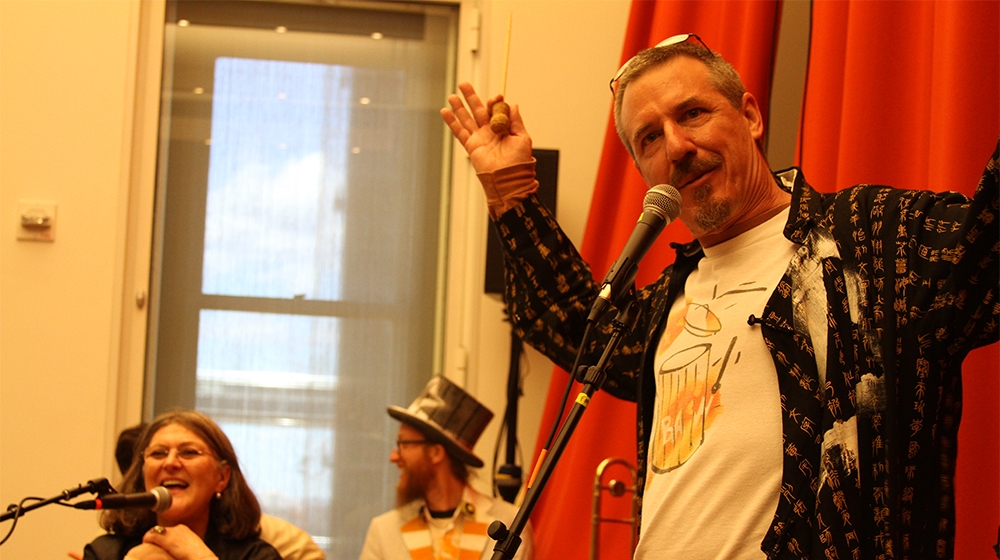 Established by anonymous parents of a Bennington alum, the annual $5,000 award has no restrictions on how it may be used. The 2019 honoree will be invited to campus to meet with current students, allowing them to connect with an exceptional leader who is affiliated with the College.

John Bertles is an educator, composer and instrument-builder. Since 1988, he has worked in arts education as a teaching artist, administrator, professional developer and consultant. He and Carina Piaggio, his wife and creative partner, are the co-founders of Bash the Trash Environmental Arts, which brings science-based environmental arts education performances, professional development sessions, and hands-on events to communities, schools, and cultural institutions, reaching over 60,000 children a year. Bash the Trash consists of nearly 40 performer/educators across the country, with ensembles in Boston, Detroit, and Los Angeles, as well as in their home base of New York City.

As a composer, Bertles produces an eclectic output of songs, experimental compositions, classical pieces, music for dance and theater, and downright strange stuff. Along with Piaggio, he is the creator of The BTT Songbook, with over 50 songs written especially for performances for children and families. His “Incline and Trashicaglia” was commissioned and performed by the Canton Symphony Orchestra, along with Bash the Trash and audience-members with their own homemade instruments. His music has been performed across the US as well as in Indonesia, Japan, Scotland, Argentina, and Canada, and he is a five-time winner of the ASCAP Plus Award for Childrens’ Songwriting.

Bertles is also National Workshop Leader with the John F. Kennedy Center for the Performing Arts, presenting professional development programs for teachers across the US. In this capacity, Bertles has presented workshops and related performances on a variety of arts education subjects in 28 states. He is an advocate for the arts, science, and sustainability, a board member emeritus of the New York City Arts in Education Roundtable, a contributor to NYC’s Blueprint for the Arts arts standards, and an active blogger on educational and environmental issues.

In 2018, Bertles worked alongside fellow Bennington alumnus orchestrator Michael Starobin ’79 to create a unique set of musical instruments for the Broadway hit Once on This Island. For this, he and Starobin were each nominated for a Drama Desk Award for Best Orchestration. Once on This Island went on to win a Tony Award for Best Revival of a Musical and garnered a Grammy Award nomination for Best Cast Album.