Student Works is organized by Bennington’s Student Educational Policies Committee (SEPC), which is comprised of elected students who represent the student body on matters of academic policy. SEPC President Eve Mefferd ’20 was a driving force behind this year’s Student Works, recruiting presenters from across all disciplines.

Before and after the event, a visual arts gallery was held in Newman Court, featuring works by Zen Beattie ’21, Emily Hinojosa ’20, Musa Ghaznavi ’20, Ella Stewart ’22, Alex Wall ’20, and Charlotte Zinsser ’21.

Hinojosa’s artwork explores themes of home and the self. She screened her short film Dualidad, which overlays footage from her two homes—in the bordertown of Brownsville, TX, and at Bennington College—in a montage that depicts her struggle to define her identity.

She also spoke about her painting Me Raja, Me Raja, which depicts the U.S./Mexican border as a scar running down a woman’s body. The work, inspired by Gloria Anzaldúa’s collection Borderlands/La Frontera: The New Mestiza, was included in the inaugural Encuentro en la Frontera, a three-day festival uplifting the Rio Grande Valley through art, education, and activism.

Hinojosa was excited to see her peers’ projects on display at Student Works.

“Socially, we all interact with each other, but usually you don’t want to talk about your schoolwork when you’re hanging out on the weekend,” said Hinojosa. “It’s cool to see what people work on most of the time. I learn things about people; I’m like, ‘I didn’t even know you studied that!’” 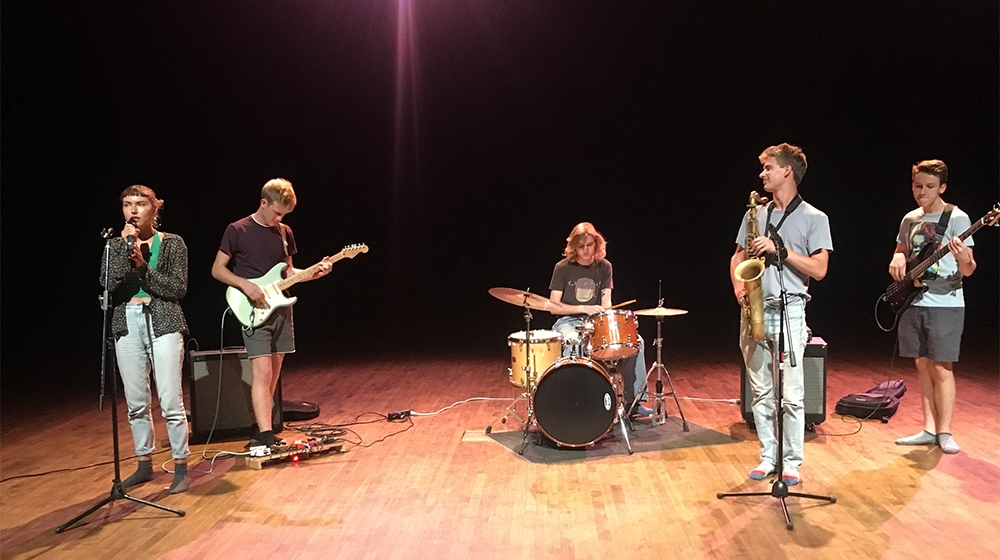 “Student Works is a great opportunity to see what other people are doing that you might be interested in and to see who you might want to collaborate with,” said Yarmo-Gray. “I’ve seen stuff that has made me realize that people who I didn’t know did music, and then a whole world opened up seeing them perform. It’s a good way to get to know the campus and the community by seeing what people are passionate about performing.”

Yarmo-Gray also closed the night with a performance of their solo piece “Follow You,” which grew out of a composition they wrote as a dance class accompanist.

“The first melody, which is most of the piece, came from me improvising while my friend Luke was drumming,” said Yarmo-Gray. “As I sat with it, it kept getting stuck in my head. My goal is that by the end of the piece, which repeats the main theme four times, the audience will be able to sing along.”

Evan Caldwell ’20 offered a reading of scenes from his play La Princesa Concha, which he has been developing since he first wrote the draft in Sherry Kramer’s The Magical Object playwriting course.

“In that class, all of our plays revolved around an object that acted as an organizing metaphor,” said Caldwell.

In La Princesa Concha, that object is a seashell. The play follows two siblings, who first meet after their mother’s death.

“After their mother dies, her daughter and son come together and have to hash out all the years they missed and try to make sense of her legacy and the stuff she left behind,” said Caldwell. “Their focus is primarily on the seashell, which was the first thing their mother ever got in America, after she came over from Cuba as a little girl. The seashell is a metaphor for their family’s history, and now they have to find it and keep the family line going.”

In his presentation “Beauty and the Yeast,” Zac Bull ’20 summarized the work done in his Spring 2019 Genetics course. The class allowed various genetically different strains of yeast to grow under multiple concentrations of SDS, a common industrial detergent. Their growth—or lack of—was used to understand how SDS affects living cells, both yeast and otherwise.

Louis Celt ’21 presented on the plastic pollution crisis. He spoke about testifying at the Vermont House of Representatives in support of S. 113, the nation’s strongest anti-plastic legislation to date, which addresses single-use plastic bags, drinking straws, and polystyrene. Bennington students will continue working with Senior CAPA Fellow Judith Enck to counteract plastic pollution through Enck’s Beyond Plastic project.

As part of his position with Friends of Acadia at Acadia National Park, Ben Watson ’21 educated visitors on the Park’s unique ecosystem and the impacts it sustains from visitation.

“Within the National Parks system, there’s a growing call for stewardship,” said Watson. “The position was similar to an interpretation ranger; I was out in the field, talking to visitors and answering questions. I educated people on leaving no trace and helped with trail work, too.”

Schyler Norton ’20 presented about her semester abroad in Paris, where she studied at the Institut Catholique de Paris.

During Spring 2019, Steven Hendricks ’20 taught Japanese language and culture to third-grade students at Bennington Elementary School. At Student Works, he explained his tutorial using volunteers from the audience, whom he guided through a game that taught directions in Japanese—forward, backward, right, and left—by moving in patterns.

During her sophomore year, Deja’ Haley ’20 participated in a research survey project that tested the measures between students’ Black identity and their willingness to give back to their communities at a liberal arts school versus a public school. The group later expanded their analysis to study students at predominantly white institutions (PWIs) and historically Black colleges and universities (HBCUs).

“We found that Black students at HBCUs are more open and willing to give back to their communities than those at PWIs, which is interesting,” said Haley. “This basic project is what started to shape my thesis, which will be a survey project testing to see if one’s commitment to their racial identity affects the way they see mental illness, the way they seek help for it, and if it affects them giving back to their community.”

Just as Haley has noticed how meaningful senior work has stemmed from her Plan, she enjoys the opportunity Student Works provides to see the progression of her peers’ work.

“A lot of times, you don’t know exactly what people are working on, but you know they’re working on something,” said Haley. “Even when I talk to my friends, I’m surprised to hear what they’re doing, and the meaning is really starting to hit. It’s exciting to see presentations or readings and see how their work has evolved over one or two or three years.”

Several poets read during Student Works, including Luci Arbus-Scandiffio ’20, who shared selected poems from her literature thesis, and Frances Erlandson ’20, who read poems from her senior thesis.

Erlandson studies both Architecture and Poetry, the latter of which is a recently discovered passion. However, she notes, the two fields overlap.

“I really like to read about Architecture,” said Erlandson. “I’m interested in how people talk about buildings and how buildings can influence an experience or create a space. Poetry is also focused on creating a space for an experience to happen.”

In her Poetry work, Erlandson is interested in themes of construction.

“I have an idea for a project where I’m going to write poems about specific buildings,” said Erlandson. “I want to add a research element, so I’ll be reading a lot about a building and then writing a poem that may not talk directly about the building but is influenced by it. I want to use poetry as a translation of architecture.”

Gabriela Yadegari ’21 has integrated her interest in studying radio and oral histories with her interest in studio and visual arts. After finding inspiration from her work with local students, who found the power of their own stories and voices through radio, Yadegari began experimenting with the physical power of recorded narratives.

She recorded her parents’ immigration stories in their native languages. Under a constructed platform, she mounted a stereo system that played these stories, allowing the sound to radiated throughout the listeners’ bodies. Yadegari’s Student Works presentation played visualizing these narratives, as well as abstracting oral histories.

Karlyn Ellis ’21 and Lou Brownlee ’21 were roommates in Fels over the summer. Both passionate Dance students, the two decided to compose a piece for Student Works. The result was “Make That Feeling Work,” a movement study/love letter about our insides, making feelings work, and Janis Joplin.

“I like choreographing duets because I've been able to best explore care between people through duets. I think people are most transparent when interacting with one other person,” said Ellis. “Lou and I started making this duet this summer. We are inspired by each other and the swing and sway of Janis Joplin. We have been thinking about the interplay between leading and following and loving our insides.”

“It’s been fun working with Karlyn because she calls me out, and it’s fun to have someone push back against you when you're creating,” said Brownlee. “We're both interested in contact and partnering work, so we started by going to the studio and improvising with partnering and contact work, feeding back and forth. We’re both tall, strong dancers, so we got to experiment with lifting each other and sharing weight in an interesting way.”