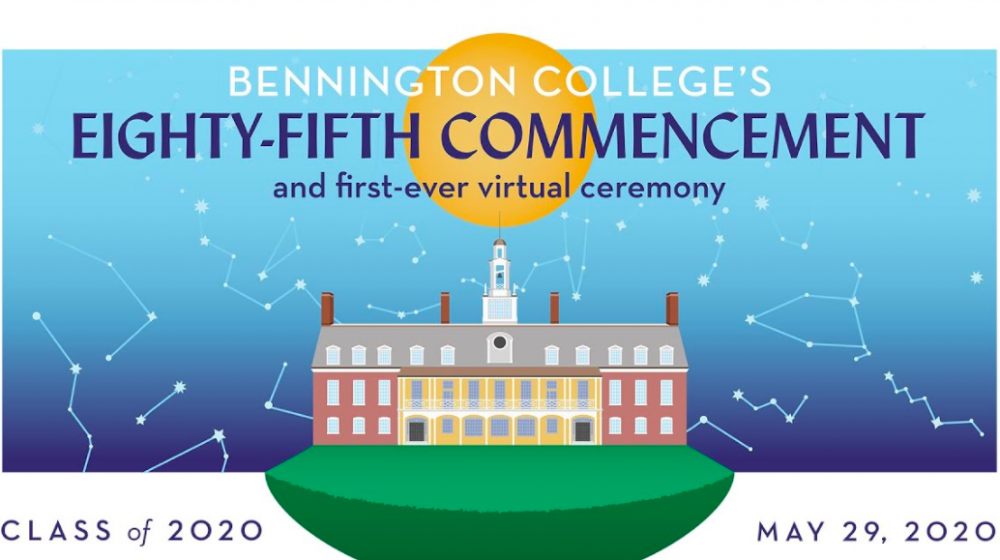 Please join us as we celebrate the Class of 2020.

Missed the Friday ceremony? Catch up here. The link for Saturday has been posted above.

Award-winning visual artist and co-host of Ear Hustle podcast, a finalist for the 2020 Pulitzer Prize

All virtual Commencement exercises will be posted to the Commencement webpage and will remain up for viewing after the premiere. 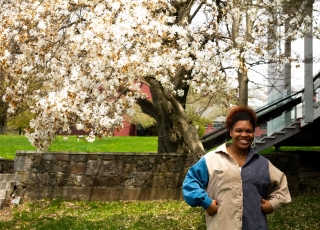 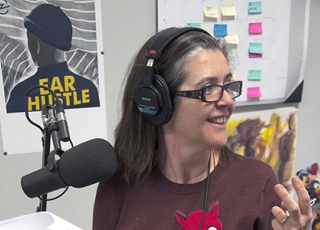 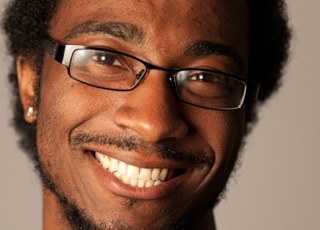 Deja’ Haley '20 will be the senior class speaker. Haley is a student of Black Studies, Literature and Psychology. Her academic path at Bennington has been driven by a desire to understand how we create belonging and community through our differences. Formative to Haley’s time at Bennington was an Usdan curation course about the African American students and faculty who helped shape the College’s past, which inspired in her a commitment to continue that legacy for future generations. Haley is admired among her peers for her unwavering efforts to create a more just and kind world.

Multimedia artist Nigel Poor ’86, co-creator, co-producer, and co-host of the award-winning podcast Ear Hustle, a finalist for the 2020 Pulitzer Prize in Audio Reporting, will address the class of 2020 at Bennington College’s 85th commencement. Poor’s visual artwork explores the various ways people make a mark and leave behind evidence of their existence. Her work has been exhibited both nationally and internationally and can be found in various museum collections including the SFMOMA, the M.H. deYoung Museum, The San Diego Museum of Contemporary Art, and the Corcoran Gallery of Art, Washington D.C. She is also a professor of photography at California State University, Sacramento.

In 2011, Poor got involved with San Quentin State Prison as a volunteer teacher for the Prison University Project. In 2013, she started working with a group of incarcerated men producing a radio project. Currently, Poor is the co-creator, co-producer, and co-host of the award-winning podcast Ear Hustle, which shares everyday stories of life inside prison told from the perspective of those who live it. Ear Hustle, now on the cusp of its fifth season, is produced by Poor and Earlonne Woods, who was formerly incarcerated at San Quentin. The podcast is a collaboration between people inside and outside the prison system, working together as colleagues. Although the show concentrates on life inside San Quentin, it ultimately addresses larger questions about humanity.

Since its inception, Ear Hustle episodes have been downloaded over 38 million times, and today, prisons around the world are sharing Ear Hustle stories internally. It has received critical acclaim from the New York Times Magazine, WIRED, PBS Newshour, CBS Sunday Morning, NPR's All Things Considered, Rolling Stone, The Economist, The Marshall Project, and The Guardian. Ear Hustle has also received 2 Peabody nominations.

“Bennington is the right place for those who want to take chances and find their own way in the world. It’s a place of collaboration where you can explore your own associations and are taught to believe in the necessity of asking questions, while still leaving room for the ever-important experience of not knowing—of not being sure, but wanting to dig in and figure it out,” said Nigel Poor. “I’m looking forward to coming back to Bennington to engage in conversation with graduating students about the importance of digging in, asking questions, and engaging in the humble-but-powerful act of compassionate listening.”

Literature faculty member Phillip B. Williams will be the faculty speaker. Williams is the author of Thief in the Interior, winner of the 2017 Kate Tufts Discovery Award and a 2017 Lambda Literary award. He received a 2017 Whiting Award and 2013 Ruth Lilly Fellowship.

How to Attend Virtual Commencement

We're excited to announce that all virtual Commencement exercises will premiere live right here on the Commencement webpage! Links will be posted on this page and will remain up for viewing after the premiere (no password or login required). Family members are invited to share this viewing link with their loved ones and honor their graduates on social media during the event.

Reminder emails will be sent out a week in advance, as well as the day before. Forward these reminders to your friends and family members to invite them to join in the celebration.

How Can I Invite Family and Friends?

Anyone can attend the ceremonies—and they can access the link to the events on this page. If you'd like to send them an invitation, please share this page with them.

What is the Schedule of Events?

Dear students and families of the graduating class of 2020,

I hope you are all safe and well today. I know these are not the circumstances in which you expected to finish your senior year — away from your faculty, one another, and your campus home. This has been an incredibly trying time and I want to thank you for your adaptability to the changes in your academic experience. Please know that we are doing everything we can to stay connected and support your success in these final months.

Among the heartbreaking choices we have been confronted with is the question of what to do about Commencement –– your graduation from Bennington. I write today to share that we have made the very difficult decision to cancel the in-person Commencement in May. Public health projections remain highly variable in the U.S. for at least the next six months. I know how disappointing this news will be to all of you, and to your families and friends, who will be unable to see you walk across the stage and celebrate with you in person this year.

However, the need to not only recognize your achievements, but also to come together to laugh, grieve, and reflect on how you have grown together has never been greater. To this end, we want to hold two distinct events to mark your graduation from Bennington.

The first will be a virtual celebration on the scheduled Commencement weekend, May 29th and 30th. We will hear from our planned Commencement speakers, alumna Nigel Poor ’86, literature faculty member Phillip Williams, and senior speaker Deja’ Haley '20. We are working on the planning now and will have more information to share in the coming weeks.

The second will be the opportunity to come together at next year’s Commencement weekend, when we will celebrate both your class and the class of 2021. The details are still in development, but I can assure you they will be informed by our commitment to honor each of you and your time spent here. We will engage with as many of you as possible to understand what will make this shared event feel distinctly special to you.

I know that the idea of celebrating your graduation next spring feels very far off today, but this decision allows us to craft the fulsome celebration that your class deserves. It will also give us time to work with students who need assistance to return to campus.

We did not come to this decision lightly and we understand that it isn’t the same as being here together in May, as we hoped. You — the graduating class of 2020 — are part of something unprecedented, and your Commencement is part of that story now. As Bennington people, you are uniquely prepared for the call of this moment: to be nimble, inventive, and unafraid of change. This commencement plan isn’t what any of us hoped for, but it is the best solution we have in an uncertain time. With creativity and community, we can rewrite this story for ourselves and craft a celebration that befits your achievements while facing historic challenges.

Best of all, we can do it together, in the place where your journey began. I can’t wait to welcome you back. Until then, stay well.