In 2008, the College established the Rebecca B. Stickney (“Becca”) Award. The award is given to an employee who consistently demonstrates the kinds of qualities that our community so appreciated in Becca: integrity, concern for what the community wants and needs, and an unfaltering effort to provide the best service possible, no matter what the task involves. 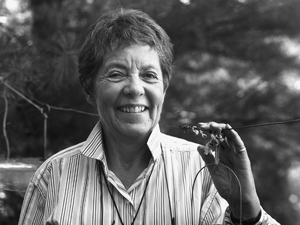 Five years following her graduation from Bennington in 1943, Becca returned to Bennington at the invitation of Bennington president Fred Burkhardt to establish an alumnae office. Becca continued to work at the College wearing, as she often put it, “several hats.” She served two stints as Director of Admissions for a total of 15 years, directed Public Relations and the Development Office, and established the Student Services Office in 1970. She became Assistant to the President in 1975 and, at the request of president Elizabeth Coleman, deferred her retirement to work part time in the President’s Office. She continued in that role until her death at 86 in 2008. In 1980, Becca was invited to become a member of the Board of Trustees and subsequently became its corporate secretary.

Becca was not only deeply committed to the well-being of those who studied, taught, and worked at the College, but also to its trees and grounds. She was often found laboring with the grounds crew planting trees, pruning shrubs, and keeping track of and maintaining the 15 bluebird houses she placed around and about the College’s fields and meadows. She was an avid bird watcher and every morning rain or snow or shine, she left her campus house, with dog and binoculars, for the two-mile walk to check on that outside world she loved.

Each academic year, the College invites nominations for the Rebecca B. Stickney Award from across the institution. A selection committee of staff and managers reviews nominations based on the following criteria:

To nominate an employee for the Rebecca B. Stickney Award, please complete a nomination form by July 15, 2019.

The Rebecca B. Stickney Award recognizes staff employees who have made outstanding contributions to the Bennington College community. Congratulations to all recipients.

2016 | David Norman, Office of the Provost/Dean of the College

2012 | John Umphlett, Office of the Provost/Dean of the College

2011 | Joan Goodrich, Office of the President