Dr. Mieres is a renowned expert in the fields of nuclear cardiology and cardiovascular disease in women. Her clinical focus and research are centered on the elimination of health disparities and sex and gender disparities in cardiovascular disease. She is a leading advocate for patient-centered healthcare and medical education reform through an expanded health care delivery model that includes the social determinants of health. Dr. Mieres has authored/co-authored over 60 scientific publications and presented her work at over 100 national and international conferences.

My Bennington education has been instrumental in firmly anchoring me to my family’s core value of being a "global thinker."

Dr. Mieres is currently Senior Vice President of Northwell Health’s Center for Equity of Care, where she also serves as Chief Diversity and Inclusion Officer. She is also the Associate Dean of Faculty Affairs and a professor of cardiology at The Zucker School of Medicine. Among her professional accolades, Dr. Mieres is a Fellow of the American Heart Association; the American College of Cardiology; and Master of the American Society of Nuclear Cardiology, where she also served as the first female president in 2009.

“As a pioneer at the intersection of public health, medicine, and advocacy, Dr. Mieres’s career is an exceptional example of a very Bennington belief that great change comes from looking at old problems in new ways and through multiple lenses,” said President Laura Walker. “Her work is improving lives today and changing the public health outcomes of marginalized groups for years to come.”

Before Dr. Mieres became a nationally-recognized doctor, she was an undergraduate student at Bennington College. Though her studies concentrated primarily in Physical Sciences, she also took Dance and Writing during that time, studying under the poet Ben Bellit. Dr. Mieres’s undergraduate career spanned the arts, humanities, and sciences.

Mieres has been honored at a virtual presentation of the Elizabeth Coleman Visionary Leadership Award, which also includes an interview with her about her work, facilitated by Sunny Guo, a Bennington College Postbaccalaureate Premedical student. Watch this event via Bennington’s website.

“My Bennington education has been instrumental in firmly anchoring me to my family’s core value of being a ‘global thinker,’” said Dr. Jennifer Mieres. “The Bennington way has laid the foundation for developing a creative lens that has allowed me to be a more effective communicator through combining science and art for storytelling in a multimedia approach to achieve my lofty goal of empowering people to be partners in their health care.” 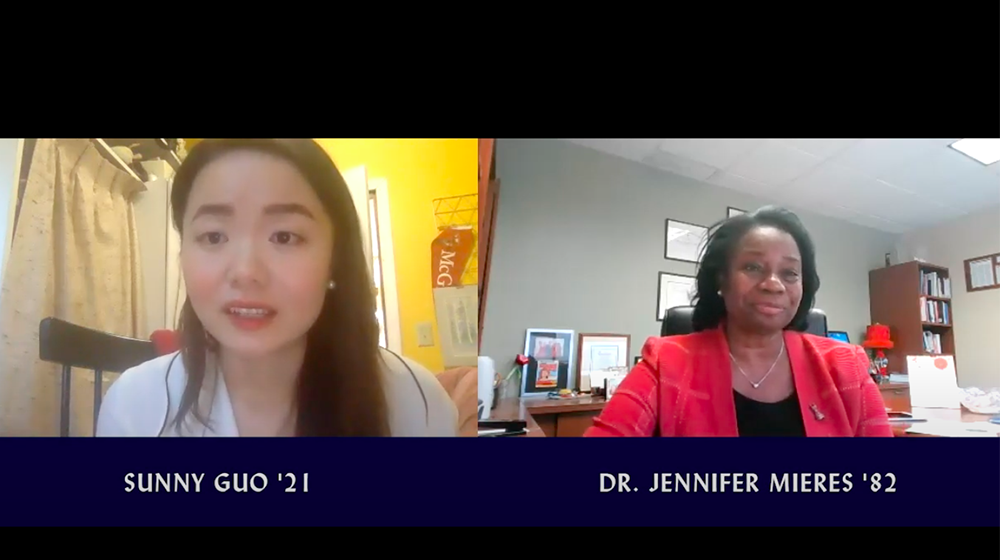 Established by anonymous parents of a Bennington alum, the annual $5,000 award has no restrictions on how it may be used. The 2020 honoree will be in conversation with a current Bennington College Postbaccalaureate Premedical student, allowing students to connect with an exceptional leader who is affiliated with the College.

Dr. Jennifer H. Mieres is a leading expert in the fields of nuclear cardiology, cardiovascular disease in women and patient centered healthcare advocacy. As Senior Vice President of Northwell Health’s Center for Equity of Care, she has oversight of and provides strategic guidance for Northwell’s diversity and health equity initiatives. Dr. Mieres also serves as the health system’s first Chief Diversity and Inclusion Officer. She is a member of Northwell’s Katz institute of Women’s Health steering committee. Dr. Mieres is also the Associate Dean of Faculty Affairs and a professor of cardiology at The Zucker School of Medicine.

A graduate of Bennington College and Boston University School of Medicine, she is a Fellow of The American Heart Association (AHA), American College of Cardiology (ACC), and Master of the American Society of Nuclear Cardiology (ASNC) and served as the first female President of the ASNC in 2009.

Dr. Mieres’s clinical focus and research are centered on the elimination of health and gender disparities and cardiovascular disease in women. She is a leading advocate for patient-centered healthcare and medical education reform and has authored/co-authored over 60 scientific publications, including as lead author of the 2005 and 2014 AHA cardiac imaging guidelines for women. As an international speaker, she has presented her research as distinguished faculty at over 100 forums and conferences both nationally and internationally, including scientific sessions of the ACC, AHA, ASNC, the International Conference of Nuclear Cardiology, and IHI/BMJ International Forum on Quality & Safety in Healthcare.

A true patient and community advocate; Dr. Mieres is actively involved in service. She serves as a national spokesperson for AHA’s Go Red For Women movement and has served as chair of several national AHA committees, as well as the Scientific Advisory Board for WomenHeart and is a member of the Woman’s Day magazine heart health advisory board.

A prolific communicator, Mieres recently co-authored Heart Smart for Women: Six S.T.E.P.S In Six Weeks to HeartHealthy Living, published in October 2017; and in May 2019, the Spanish version of Heart Smart, Un Corazon Saludable Para La Mujer Moderna: Seis P.A.S.O.S en Seis Semanas para Mantener La Salud Del Corazon. Her previous book Heart Smart for Black Women and Latinas: A Five-Week Program for Living a Heart-Healthy Lifestyle was published in 2008. Following her Emmy-nominated documentary A Woman’s Heart (2001), her creative ingenuity has evolved as an executive producer of a two-part documentary series: Rx: The Quiet Revolution and Doctors of Tomorrow (2015). The films have forged a change in narrative while garnering placement on national TV network PBS and in educational institutions. She is an executive producer of the women’s health documentary Ms. Diagnosed, which premiered at the Cinequest Film Festival on March 7, 2020. Dr. Mieres is routinely called upon by national and local media for expert commentary and has been designated as a most-credible voice in the healthcare industry.

A recipient of several prestigious awards, Dr. Mieres has been recognized as a tireless force, fostering diversity in medical education and gender equity in cardiovascular care, as well as eliminating disparities in the delivery of healthcare to the community. The Association of Black Cardiologists recognized her work with the Walter M. Booker Sr. Health Promotion Award in 2015. The American Heart Association has also presented her with a number of awards, such as the Chairman’s Award; the Louis B. Russell, Jr., Memorial Award; the Award for Outstanding Service as President; and the William Groom Award for Volunteer of the Year. Dr. Mieres has also received the National ACC’s Women in Cardiology Mentoring Award, the Woman’s Day Red Dress Award, the WomenHeart Wenger Award for Healthcare, the New York State Governor’s Award of Excellence, and was recognized in April 2018 by Good Housekeeping magazine as a top 10 Humanitarian.